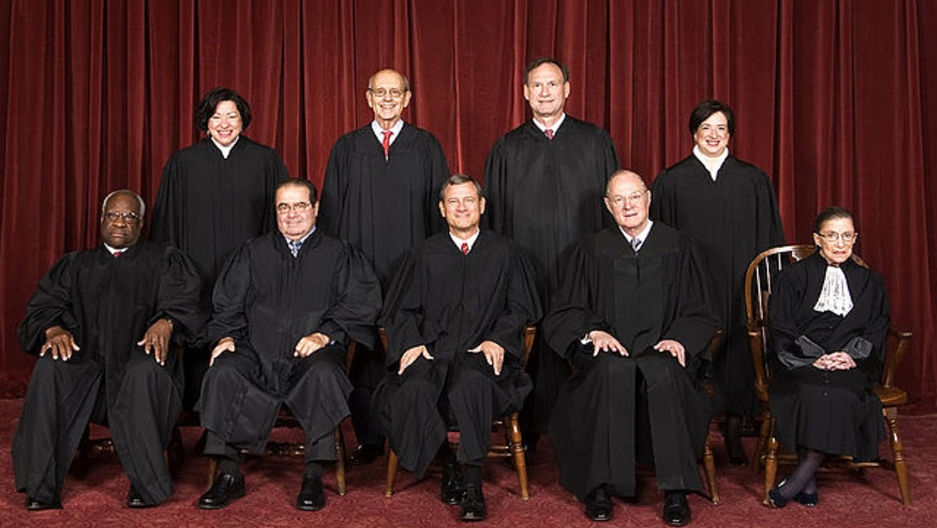 The United States Supreme Court in 2010. (Photo by Steve Petteway via Wikimedia Commons).

The U.S. Supreme Court took up the first of two cases regarding same-sex marriage on Tuesday.

Emily Bazelon, legal scholar and lecturer at Yale Law School, says during Tuesday's hearing the courtroom was electric with anticipation of what the Justices were going to say.

It is not clear whether the defenders of Proposition 8 have the right to challenge a trial court ruling because the Attorney General and Governor of California declined to defend the constitutionality of the measure, Bazelon says.

"The court is not clear about whether to get rid of this case for lack of standing, or to strike down Proposition 8...in a way that would just affect California or affect some states -- or all the states," she says. "What I did not hear were five votes to uphold the gay marriage ban in California."

In Tuesday's arguments, the Justices had various concerns about the case.

"You could hear Justice [Stephen] Breyer uncomfortable with the idea that the eight states that have civil unions and not marriage would be somehow penalized for making some progress toward gay marriage, but not going all the way," she said.

Justices Ruth Ginsberg, Sonia Sotomayor and Anthony Kennedy were heard wondering if the case should have been granted at all, Bazelon says.

Greg Stohr, reporter for Bloomberg News, says there are two different ways the Supreme Court could back out of the case: The first is by deciding that the defenders of Proposition 8 have standing in the courtroom, Stohr says. The other, raised by Justice Kennedy, is if the court should have agreed to hear this case and make this very big decision when the debate is still at an early stage.

"The more likely thing would be that the court would find an incremental step. This is a very incremental-ist court…it's a court that tries to defer to the political process to social change," he says. Historic decisions like Brown v. Board of Education and Roe v. Wade came with a price and the court was viewed as forcing the decision on the country.

Justice Kennedy, who has been generally viewed as supportive of gay rights, surprised observors during the trial because he said the decision was not clear, Stohr says.

"One argument you heard from the more conservative Justices was that this is such a new debate and we need to let this percolate a little bit more," he says. "There was clearly a reluctance among them to declare a nationwide right to gay marriage or even a California-specific right."

On Wednesday, the Supreme Court will hear the United States v. Windsor to determine the constitutionality of the Defense of Marriage Act.