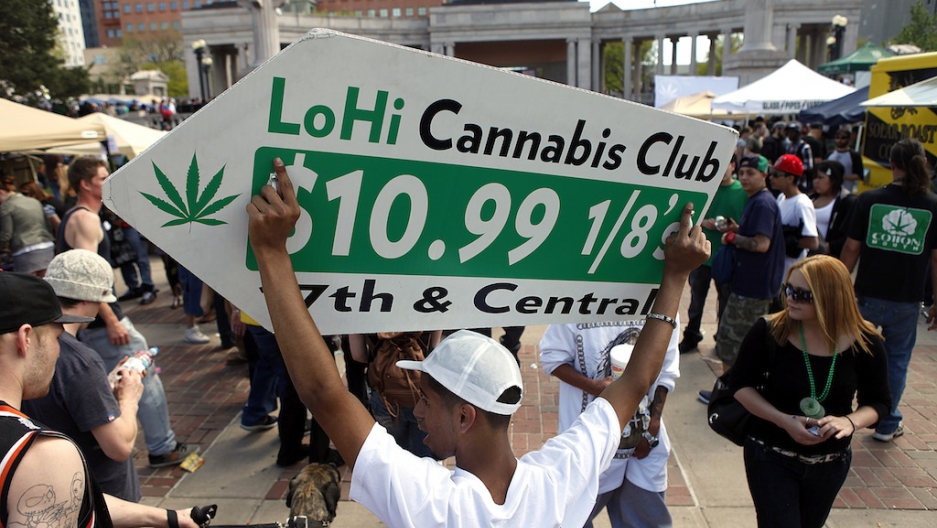 Javier Martinez uses a sign to advertise for LoHi Cannabis Club dispensary as an estimated 10,000 people were expected to gather for a 4/20 marijuana rally in Civic Center Park April 20, 2012 in Denver, Colorado.
Credit: Marc Piscotty
Share

DENVER — When Chuck Blackton opened his medical marijuana dispensary in 2009, neighbors included a check-cashing business and a dollar store.

Now, a sushi bar has moved in a few doors down, and a new deli grocer across the street offers canned escargot and Niman Ranch corned beef sandwiches. A magnet on the espresso machine at the Amsterdam Café, a neighborhood hangout, declares: "Marijuana: Not just for hippies."

Blackton sees his stretch of Denver’s Colfax Avenue as upwardly mobile. He and others who’ve striven to make their dispensaries look like something other than tattoo parlors are saying marijuana is for yuppies — and everyone else. They are convinced their industry  has a future even if it still faces suspicion, regulatory uncertainty and a possible federal crackdown.

Blackton’s dispensary, named Verde, fits right in with the new neighbors. Its walls are washed in southwestern yellows and oranges. Its cabinetry is custom. A fireplace and a leafy potted plant lend coziness to the room where buds are dispensed to customers who possess state-issued cards showing a doctor has recommended they use marijuana to treat anxiety, pain or a host of other ailments.

"Let’s wake people up and show them that we’re a real business," Blackton said. He spent about $35,000 on decor and fittings, and put ample thought into the shop’s understated name and elegant logo — which features a green leaf accenting the V in Verde, and which could easily be mistaken for the branding of a vegan restaurant.

"We’re not trying to sell crack or cocaine," Blackton said. "That’s the biggest thing: Taking marijuana and separating it from other drugs."

In 2000, Colorado voters were among the first in more than a dozen states to decree that marijuana could be legally sold for medical purposes. In November, along with Washington voters, Coloradoans passed a proposal making marijuana legal for recreational use by adults, a first in the nation.

This hasn’t meant that shops like Verde could immediately start selling marijuana to anyone. It took years to develop the regulations for medical marijuana sales. Recreational marijuana is to be regulated like alcoholic beverages. Rules on such matters as license fees, taxes and driving-while-high are expected later this year.

State officials have made clear they want to build on the experience of medical marijuana dispensaries, and those entrepreneurs are waiting to see whether it will make sense to get into the recreational businesses.

"With any luck, we’ll get to do both," said Don Novak, who runs Denver’s GroundSwell Gallery & Cannabis Boutique.

Novak wants money earned from recreational users to be used to help impoverished patients buy marijuana for medical use, and to help fund research into better ways to deliver marijuana’s painkilling and anxiety-relieving effects.

Novak said many of his customers are like himself: busy people who want the benefits of marijuana but don’t have time or inclination to get high. He sells preparations that are ingested in brownies or drops, saying they have helped him with back spasms and don’t leave him too groggy to work.

Novak is the kind of conscious consumer who not only drives a Prius, but shares it with coworkers at the marketing company he’s run since 1998. A community-oriented entrepreneur, he’s been organizing a Halloween party for neighborhood families for years. When he opened GroundSwell in 2010, he saw it as a good place to host the party. Every year since, the gallery space has filled up with kids carving pumpkins (the gallery is separate from the area where marijuana is dispensed).

He fell into the marijuana business after a doctor asked for help with distribution. At first, Novak took orders on the internet and sent nurses to make deliveries. When new regulations made that illegal, he opened GroundSwell, decorating it with beetle-kill paneling (before this type of pine — stained blue-gray by insect infestation — became trendy).

A long, narrow front room in the space he found seemed natural for a gallery, and he had a friend who wanted to be the curator. This month, GroundSwell is joining art partners that include the Denver Art Museum in presenting a citywide photography biennale.

The gallery, Novak said, "was something we could do for the neighborhood. We have a unique position in our community. We just want to make sure that what we’re doing benefits our community."

Mason Cathey manages another Denver dispensary with a boutique approach, and says entrepreneurs have to ask: "How do I stand apart? That’s what comes into running a profitable business."

It is a crowded field. Just click on the WeedMaps.com mobile app and watch the tiny, spiky-leafed icons pop up all over a map of Denver. The Colorado Department of Revenue, which regulates the dispensaries, had licensed 329 across the state by the end of February, 140 of them in Denver.

At Cannabis Station, a 2010 renovation splashed exterior walls with a graffiti design. The old station’s office is a mod waiting room: cool blue walls and a white leather sofa in sleek 50s lines.

"You don’t want someone walking into what they think is a drug deal," Cathey said.

Dusty Brown, who has been following the trade in Colorado as a blogger for theweedsnobs.com, said the dispensaries with an eye for details like logos and ambiance are some of the most prominent. But for most of the rest, the struggle just to stay in business doesn’t leave much time, energy or money for branding, said Brown, who blogs as Mezz.

Owners and staff must submit fingerprints for criminal background checks to ensure they don’t have felony drug convictions. State law dictates inventory. Dispensaries can have no more than 2 ounces of marijuana and no more than six plants per registered patient, and no more than a total of 1,000 ounces and 3,000 plants.

The businesses can’t be within 1,000 feet of a school or drug or alcohol treatment center. Landlords shy from the attention a marijuana dispensary can attract, and neighbors sometimes protest.

Federal law prohibits banks from doing business with marijuana enterprises, so many dispensaries are cash-only. President Obama has said he has “bigger fish to fry” that would keep him from cracking down on recreational marijuana use in Colorado and Washington, but uncertainty lingers about what federal legislators and law enforcement officials might do.

"A lot of people didn’t want to put money into a place they were afraid they were going to lose," said Verde’s Blackton. "I saw the bigger future. [But] even when I was branding for the future, it was nerve-wracking."

The branding  didn’t always go smoothly. Blackton said that before arriving at his current logo, he sat down with his girlfriend, who is an artist,  and came up with a flowery, brightly colored sign. At least two or three people stopped in every day, asking if Verde was a Mexican restaurant.