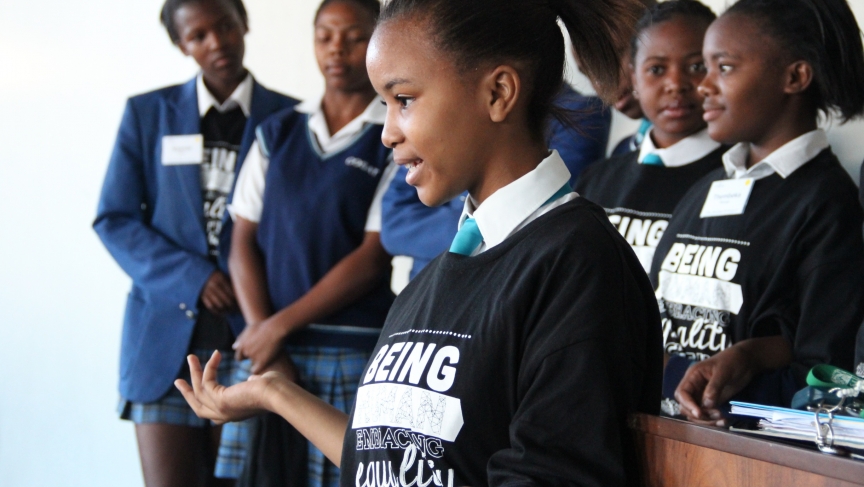 Olwethu, a 9th grader, tells the school what she learned at the Holocaust Museum.

“How many of you have ever felt different?”

This was a question posed by Bayanda, an eleventh-grader at COSAT, during a school assembly yesterday. He was one of fifteen students who had visited the Cape Town Holocaust Centre, and was giving a presentation on the experience. About half of the five hundred students raised their hands in response.

“Most of us know what it’s like to feel different,” he continued. “And we don’t like when people focus on our differences.”

This is a common thread between the Holocaust, apartheid, and other historical human rights abuses, he said. People discriminate based on differences.

“Human equality is enshrined in our constitution,” he said. “We must always remember that.”

Then, the conversation took an interesting turn.

Olwethu, a ninth-grader — and one of the top debaters at the school — stepped on stage.

“We discriminate against gay people,” she said. “Everyone knows it happens in our community. It even happens here at COSAT.”

South Africa’s constitution bans discrimination based on sexual orientation. Same-sex couples can marry and adopt children. Yet, there’s a gap between the law and how things play out on the ground, particularly in black communities. Homosexuality is often shunned, and hate crimes are disturbingly common.

At COSAT, some of those trends are apparent. There are no students who are openly gay, and the school does not have a gay-straight alliance. There’s no forum for discussing sexual orientation. That’s the norm in township schools.

“We call them moffies,” Olwethu continued on stage, using the highly derogatory Afrikaans term for a gay man.

Olwethu and Bayand are part of the so-called “born free” generation – children who were born in a post-apartheid South Africa. In general, they tend to be more tolerant than their parents, particularly around issues of sexual orientation.

“Before I went to the Holocaust museum, I thought being gay was bad,” Olwethu later explained to me. “That’s what you hear from your parents and grandparents, and people in your community.”

Her words seemed to have a powerful impact. Students at the assembly listened attentively. I began to envision a transformation taking place in their minds, and perhaps even gay students coming out, and a new dialogue taking place at the school.

Then, a few hours later, I chatted with a group of tenth-grade boys in the school courtyard.

Four others rolled with laughter.

Even the born-frees have a ways to go.