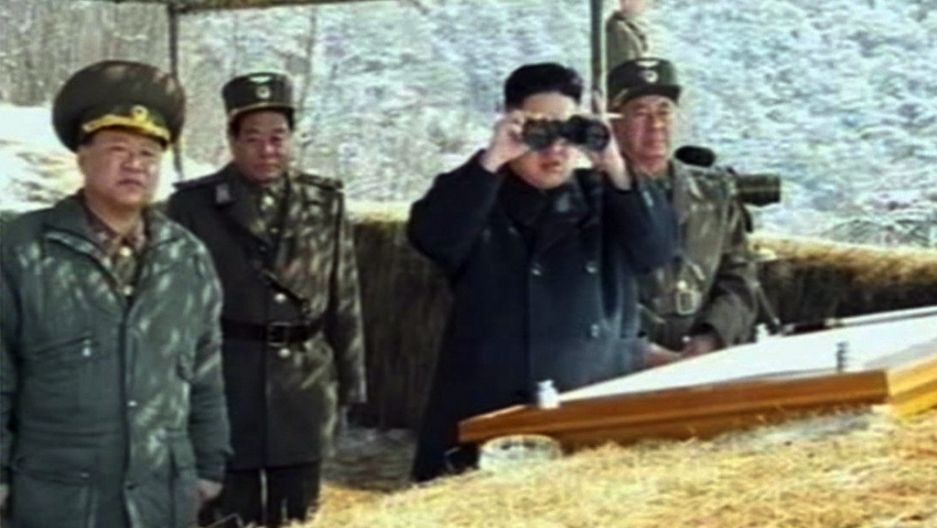 The order by the North's "supreme command" claims Kim Jong Un's military is aiming weapons at US bases on Guam, Hawaii and mainland America.

On Monday, the North's state media said, and these pictures appear to confirm, that Kim Jong Un had ordered and commanded an impromptu military exercise.

The DPRK's leader "examined the landing and anti-landing capabilities" of its water and ground forces on its eastern coast, North Korea said, according to North Korea Leadership Watch.

"From this moment, the supreme command of the Korean People's Army will be putting into combat duty posture No. 1 all field artillery units, including long-range artillery units and strategic rocket units, that will target all enemy objects in US invasionary bases on its mainland, Hawaii and Guam," North Korea's KCNA news agency said.

Usually, this sort of rhetoric would be passed off as hot air. North Korea threatens every few years to turn Seoul into a "sea of fire," and to launch fierce retaliation against American aggression.

This time, there's some cause for concern. In recent weeks North Korea has made highly specific threats to shell islands in the West Sea, and now it's claiming the military is prepared to strike South Korea and the United States.

Pretty much all analysts think the claim of attacking the United States is unlikely, but Pyongyang has been known to follow through with provocations against the South. Nobody knows when or where an attack could come, although there's been speculation among experts that the North could send ships to harass the South Korean navy and fishermen in the West Sea.

Other, quieter elements are adding to the flame. First, South Korean aid to the North fell to a 10-year low in 2012, a dearth that could explain whether the cash-strapped regime is using brinkmanship to extract concessions from the new government of President Park Geun-hye.

Secondly, on Thursday, the United Nations agreed to form a Commission of Inquiry that will look into torture and executions at North Korean prison camps, backed by both Washington and Seoul. South Korea usually hesitates when it comes to shining a light on human rights abuses in the North. It's in the awkward position of having to actually deal with Kim Jong Un's government.

The threats are the latest in a series of rhetorical flare-ups from Pyongyang since the United States and South Korean forces began joint military drills earlier this month, as US B-52 bombers flew over the Korean peninsula.

The US Department of Defense responded to the North's recent threat with a statement.

"The US is fully capable of defending ourselves and our allies against an attack" said Pentagon spokesman Lt. Jack Miller. "We are firmly committed to defending the Republic of Korea (South Korea) and Japan."

How do you solve a problem like North Korea? Tell us in our TOK below: