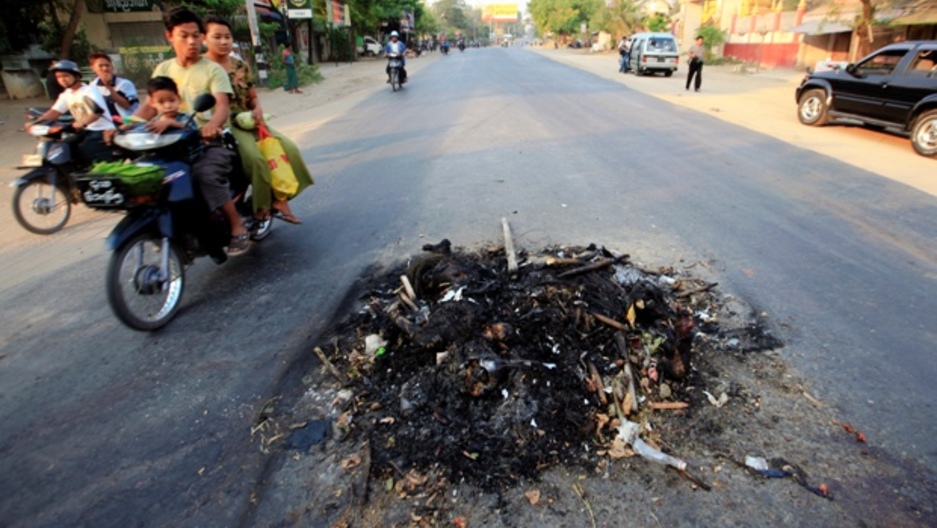 Several of the victims of the violence in Meiktila, Burma, were killed and burnt in the street, as happened here. (PHOTO: REUTERS/Soe Zeya Tun)

But the reform has a dark side.

The new freedom has allowed old tensions to come to the surface, and the most intense is a violent anti-muslim sentiment.

Over the past week, anti-muslim riots in and around the central city of Meiktila have left dozens dead, and thousands more sheltering in sports stadiums under army protection.

The violence follows an orchestrated campaign last year against a Muslim community known as the Rohingyas in the western state of Rakhine.

"(An) eyewitness, a friend of a friend, was telling me that while they were running for their lives, they have seen some children and old people — they could not run fast — and the Buddhist extremist thugs just kill them," says Burmese Muslim activist, Tun Khin.

Tun Khin is president of the Burmese Rohingya Organization in the UK.

They were killed with "knives and swords," he said.

Tun Khin stressed that local Buddhists helped some Muslims, and that the perpetrators were from outside the town.

"These are hardliners who want to stop reform in Burma," he added.