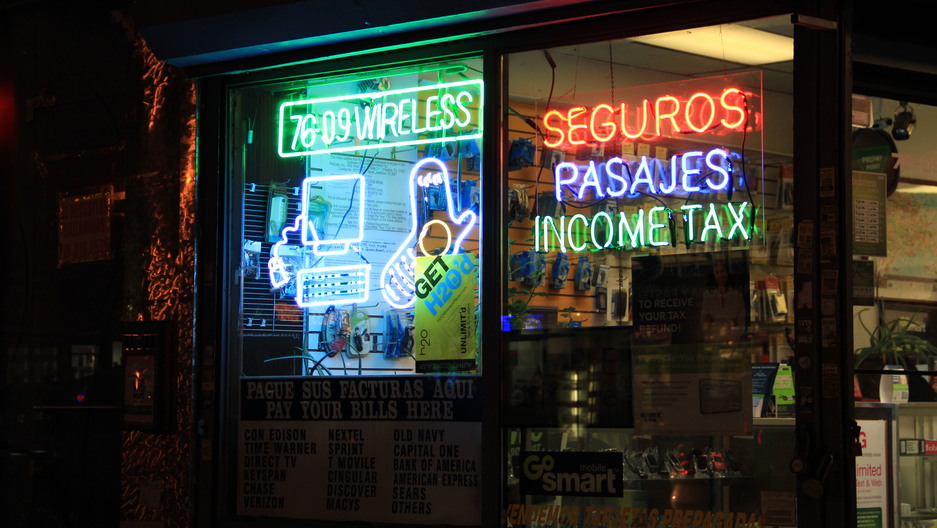 With April's tax deadline approaching, people in the US are starting to organize their paperwork. It may come as a surprise to some that many undocumented immigrants also pay taxes. However, anxiety is building as a pathway to citizenship may require paying years of back taxes. Feet in Two Worlds reporter Aurora Almendral headed to Queens, New York, to find out more.

Under the 7 train on Roosevelt Avenue in Queens, shops line the street catering to immigrants. A bakery has an ATM that makes deposits straight into accounts in Mexico. An internet café ships packages to Colombia and offers Indian eyebrow threading.

But who's especially busy right now? Tax preparers, especially those catering to immigrants. They are slammed.

To meet demand, the Food Bank of New York City runs a free tax preparation service in the basement of a Greek Orthodox church in Corona, Queens. Hang around enough and you'll notice plenty of people, more growing every year, using an individual taxpayer identification number, or ITIN, to file.

It's an alternative ID that many undocumented immigrants use for taxes. If you do not have papers, the IRS will assign you an ITIN. No questions about legal status. Tax officials say their job is to collect.

At the church, Oscar and Marcella are filing their taxes with the help of a tax preparer. The couple, from Mexico, requests using their first names only because they are undocumented. Marcella stays at home and raises their two young kids while Oscar works as a busboy.

Oscar uses his ITIN to file his taxes. He also has a W-2 from his employer, a Manhattan restaurant. To get hired and on the books, Oscar used a fake Social Security number. The restaurant never verified it and withholds taxes just like any other W-2.

Why play by the rules? Oscar says that he sees other benefits to paying taxes.

Oscar and his wife are following the debate over immigration reform closely. Their hope is Oscar's effort to file might help him earn legal status one day. Plus, he sees that Americans take taxes seriously. It's something you just do, he says.

Oscar earned so little last year that he overpaid and will get a refund. He also qualified for a child tax credit, which is the only credit available to undocumented taxpayers.

And then there are undocumented workers who do not have a Social Security number like Oscar and only use an ITIN to file. They are cash earners, working under the table. To pay taxes, they estimate their income and get charged a self-employment tax, which runs pretty high.

German Tejeda, who runs the Food Bank's tax prep services, explains that these cash earners are "basically self-employed. Even though they're working for your local grocery store, or the local restaurant, they're paying the self-employment taxes."

They're dishwashers, delivery guys, domestic workers and flower sellers. They work regular jobs, but pay taxes like self-employed people. And since their employer hasn't withheld taxes for them, these earners pay up in one lump sum. In the end, it's often twice what W-2 employees pay.

Tejeda says that cash earners who file using ITINs do not get refunds. "[They] are paying into taxes. They're not only paying, they're paying double," Tejada says.

Low-wage cash earners may face steep financial burdens if paying back taxes is required for legalization.

Both President Obama and Republicans generally agree on the tax prerequisite and have argued that undocumented immigrants should not be allowed to undermine the law. Yet critics say undocumented immigrants have paid millions in taxes. And more will be spent on hunting down tax histories than what will be collected from missing payments.

The idea of undocumented immigrants paying their way – with back taxes, fees and penalties – onto the path to legalization falls under the idea of earned legalization.

Valeria Treves is executive director of the New Immigrant Community Empowerment in Queens, which works primarily with domestic workers and day laborers. She says earned legalization is a "very charged term that really means putting immigrants through a lot of hoops in order to be able to access those immigration benefits."

Treves says that many immigrants accept that legalization will not be free. But she adds that paying back taxes and fines might be too high for people making $200 or $400 a week. People will work to pull the money together, she said, but "a lot of people are just not going to be able to meet those payment requirements."

If immigrants cannot afford it, they may remain in the shadows.

Oscar is paying his taxes this year, as he has for the last three years. But he has been in the US for 10 years, and for some of that time, he was paid in cash and did not know about filing taxes.

He says that he and his wife hope to be able to pay what they might owe. If it is too much, it may convince them, and other immigrants like them, not to come forward.