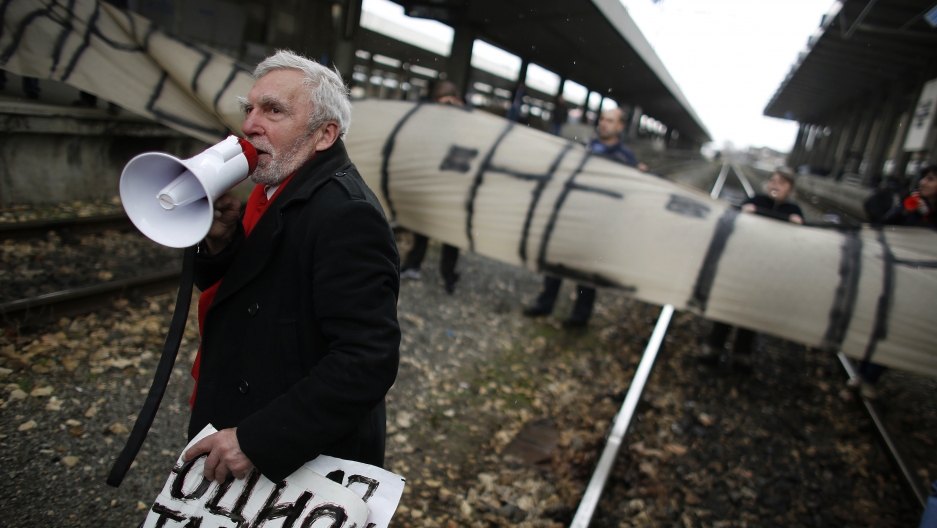 A protester shouts slogans during a blockade of the main railway station in Sofia March 10, 2013. Hundreds of Bulgarians took to the streets for a fourth Sunday in a row against monopolies and widespread corruption, demanding a stop to the planned sale of the cargo unit of ailing state railway operator BDZ and an audit of all privatisation deals. REUTERS/Stoyan Nenov (BULGARIA - Tags: CIVIL UNREST POLITICS BUSINESS TRANSPORT) - RTR3ET18

Share
When Bulgaria joined the European Union in 2007, many people thought prosperity was around the corner. But something else lurked there. Greater poverty. Pensions in Bulgaria have shriveled and costs for basic services like electricity have skyrocketed in recent years. Old and young alike have flooded to the streets in protest. Demonstrators have become so desperate that in recent weeks, six Bulgarian protestors have set themselves on fire. Kristen Ghodsee has just returned from Bulgaria where she talked to protestors. Ghodsee teaches gender and women's studies at Bowdoin College. Her latest book is Lost in Transition, Ethnographies of Everyday Life after Communism. She was on the streets of the capital Sofia on March 13th, when one protestor decided to pay the ultimate price.