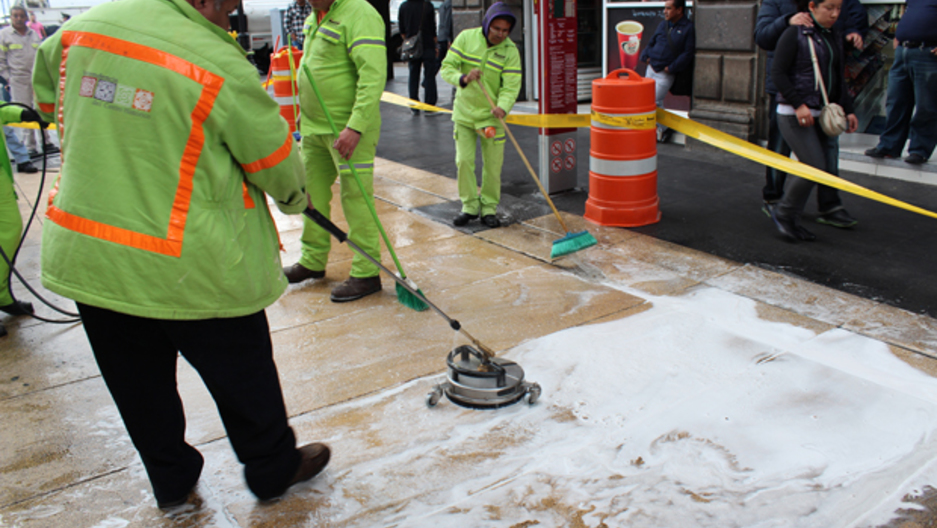 Discarded chewing gum is a common eyesore, and removing it from city streets and sidewalks can be costly. A Mexican congressman wants to solve the problem by borrowing a concept widely used in environmental regulation: making the polluters pay. Ari Daniel Shapiro of our partner program NOVA reports.

Francisco Madero Street is a busy pedestrian thoroughfare in the heart of Mexico City. There is so much going on that it is easy for people to overlook what is right beneath their feet. The beige pavement is freckled with black spots the size of coins.

"All these little black dots are pieces of chewing gum stuck to the ground," says Ricardo Jaral Fernandez. He oversees the maintenance of public space in the city center.

Today, his team has cordoned off a section of the street. Oscar Javier Cadena Mendosa uses a manual counter to tally the number of gum spots here.

After five minutes of counting in an area about the size of two parking spaces, he announces the total: "280!"

The last time he and his team counted along this entire street, which stretches for several blocks, there were 80,000 pieces of gum.

Jaral Fernandez has launched an all out cleaning offensive. He points to a small metal box connected to a long hose with a brush on one end. The hose ejects steam and a special cleaning fluid. A worker rubs the brush on a gum spot, and the gum literally dissolves.

But even a crew of 10 people working full-time is not enough to keep up with all the gum accumulating on the streets. And this is an expensive undertaking.

It costs three times as much to clean up a piece of gum as it does to buy it in the first place, which means those sticks of gum are a bigger drain on the government's budget than on the wallets of the gum chewers themselves.

A Taxing answer to a sticky problem

"It's not fair for us to be subsidizing this kind of pollution," says Juan Manuel Diez Francos. He is a congressman from the eastern state of Veracruz, and he says that gum on the streets and in the parks and plazas is a problem across Mexico.

One solution would be to enforce existing laws against littering, but the congressman says it is too difficult to catch gum throwers in the act. So he has what he thinks is a more practical solution — a gum tax.

"I know it's not very popular for a congressman to propose taxes," he says. "But my first priority is Mexico."

The tax would raise the price of each piece of gum from the equivalent of about 4 cents (US) to 6 cents. And he says the money — a total of $210 million (US) each year — would be used for gum cleanup.

Diez Francos expects his tax will be voted on by Congress later this year, and he predicts it will pass easily because congressmen from all parties have signed on in support.

A gum tax might seem extreme or silly, but it is consistent with a serious and longstanding concept in environmental regulation.

"It does roughly correspond to something called the polluter pays principle," says economist Kathy Segerson of the University of Connecticut. "[It] states that polluters should be responsible for the damages that their activities impose on others."

Segerson says polluters pollute because it is easier and cheaper to do so. For instance, it is a lot less expensive for a power plant to belch out dirty smoke than to install scrubbers. It is society that bears the costs of the air pollution — in the form of acid rain or asthma — and not the power company.

So, to protect the environment, the government can force polluters to clean up their act — by requiring scrubbers on smokestacks, say — or it can make polluters pay the cost of their dirty ways. And one way to do that is with taxes.

"There are a number of situations that are parallel to the gum situation in terms of proposed remedies," Segerson explains. One example is automobile tires, which are often disposed of improperly in vacant lots and on the sides of roads. As a result, some US states charge a tax on new tires.

"The magnitude of the tax is not sufficiently large to probably have any impact on the purchase of tires," Segerson says, "but it does raise revenue, which is then used — specifically targeted toward — the management of disposal of tires."

But even if a tax makes sense academically, it is ultimately politics and public opinion that determine how acceptable it is as a form of environmental regulation.

Back on Francisco Madero Street in Mexico City, some passersby say they think the gum tax is a good idea, but others disagree.

"I don't consider it fair — to pay a tax on cleaning up gum that I haven't even thrown on the street," says Citlalli Barrios Orozco, 26, who chews gum pretty much everyday. "It's absurd. They're better off doing something to prevent people from littering in the first place."