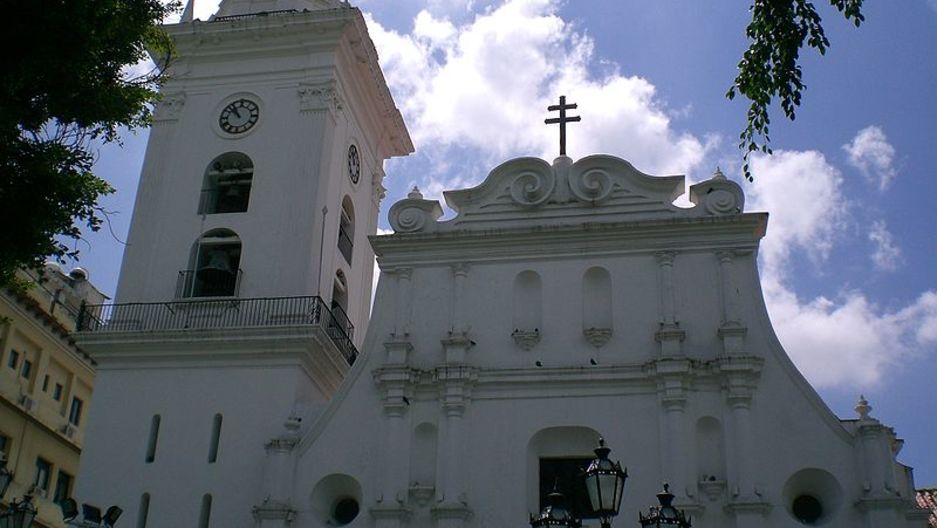 Catholics at the Caracas Cathedral in Venezuela are conflicted, with some cheering the selection of a South American as pope, while others embrace their government's disdain for the Vatican. (Photo by Guillermo Ramos Flamerich via Wikimedia Commons.)

The election of the first Latin American Pope sparked celebrations across the region, home to 40 percent of the world’s Catholics.

But many Latin American governments now lean to the left. And they’ve clashed with Church officials over their rejection of gay marriage, abortion and liberation theology.

Their No. 1 critic was Venezuela’s Hugo Chavez, who died earlier this month of cancer.

Chavez was a practicing Catholic who promoted liberation theology, which holds that priests should help the poor by working for political and social change. Chavez had no stomach for the conservative Catholic hierarchy in Rome or in Caracas.

He viewed Venezuela’s Catholic Church as an influential power base that opposed his socialist revolution, and he ridiculed leading Catholic officials, calling them “liars,” “ignorant perverts” and “Neanderthals.”

Catholic leaders struck back. One said that instead of a blessing Chavez deserved an exorcism. According to diplomatic cables released by Wikileaks, the Vatican told the U.S. government that it wanted to undermine Chavez because it was losing influence in Venezuela.

Not surprisingly, Venezuelan state TV has all but ignored the new pope and continues to focus on Chavez’s death and legacy.

When officials refer to Bergoglio, it’s often about his close ties to Argentina’s military dictatorship in the 1970s and ’80s. On his Twitter account, one former Chavez official posted a photo of Bergoglio giving communion to imprisoned former dictator Jorge Videla.

But on the streets of Caracas, it’s easy to find people excited over the new ‘papa’. Wilmer de los Rios, who works as a hotel security guard, says he was completely surprised.

He adds that many Venezuelans disagreed with Chavez about the Church.

“I think that they were very upset about it because we never had a government who was against the Church, which is what Hugo Chavez used to be,” he said.

Still, others could care less about the new pope. At a Caracas church, Xiomara Moya was praying before going to work. She’s outraged about the church sex abuse scandals and says past popes did nothing to stop them. She praises Chavez for taking church officials down a notch.

In life, Chavez likely would have scoffed at the new Pope Francisco. But interim President Nicolas Maduro suggested that, from the great beyond, Chavez helped get him elected.

“We know that our commander reached those heights,” Maduro said. “He’s face to face with Christ. Something had an influence on the choosing of a South American pope.”