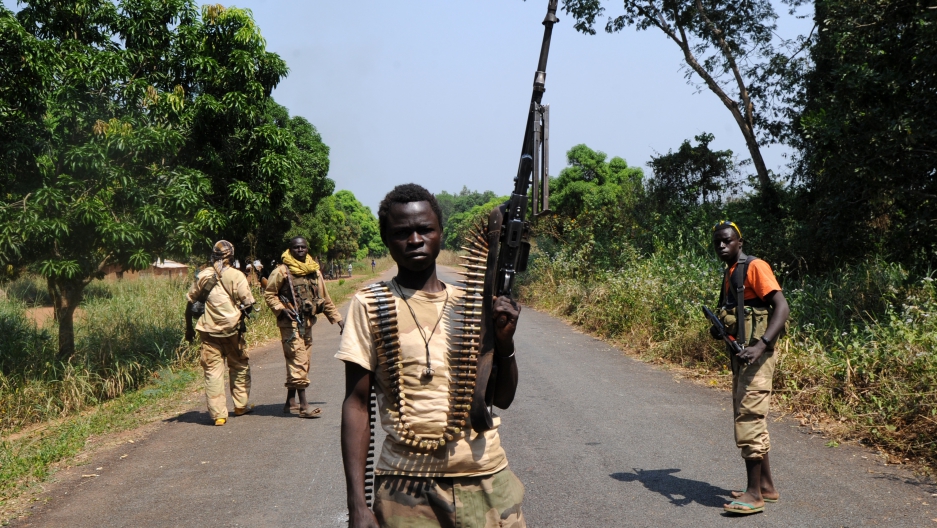 NAIROBI, Kenya — President Francois Bozize’s decade-long mismanagement of the Central African Republic (CAR) came to an abrupt end on Sunday with him fleeing the country as rebels marched into the capital Bangui and took control of the riverside city.

The rebel takeover is just the latest upheaval in the chaotic history of Africa’s least imaginatively named country.

Bozize, 66, came to power at the head of a military coup 10 years ago overthrowing Ange-Felix Patasse, who had survived numerous mutinies and coup attempts during his own 10-year reign.

Like his predecessors, who include the bizarre dictator and self-styled “Emperor” Jean-Bedel Bokassa, Bozize kept most of his 4.5 million people mired in poverty despite the landlocked country’s wealth of minerals, including gold, diamonds and uranium as well as oil and timber.

Such has been the incoherence of successive governments that the International Crisis Group think tank has dubbed CAR a “phantom state” that exists only on maps.

Armed poachers have decimated the country’s wildlife with impunity and the government’s lack of control has helped make it home to the notorious Lord’s Resistance Army (LRA) rebel group. US special forces deployed to help hunt down wanted LRA leader Joseph Kony have established a base in Obo, in the east of the country.

The final endgame of Bozize’s rule began on Thursday when a northern rebel coalition known as Seleka (which means nothing more than “Alliance” in the local Sango language) cried foul and broke a negotiated truce advancing beyond a peacekeeper-controlled “red line” 47 miles north of the capital.

A government helicopter gunship briefly held up the advance but by Sunday, Seleka had seized control of the presidential palace and state broadcaster, forcing Bozize to flee, possibly to neighboring Democratic Republic of Congo (DRC) or nearby Cameroon.

Pleas for support to the US, South Africa and former colonial power France — which has intervened in CAR in the past and is currently battling Islamist militants in another former African colony, Mali — fell on deaf ears as Bozize’s allies proved for the most part unwilling to prop up his regime.

South Africa sent 200 soldiers to CAR in January to train and support the ill-equipped and poorly trained national army. At least 13 were killed in this weekend’s battle for Bangui.

France already had 250 soldiers in the country and deployed another 300 on Saturday as a victory for Seleka looked inevitable. But despite intervening to both protect and to overthrow CAR leaders in the past, this time the French role has been limited to securing the airport and protecting an estimated 1,250 French citizens in Bangui.

After declaring victory Michel Djotodia, who has led Seleka since the rebellion began in December and has now declared himself president, told French broadcaster RFI that he would respect the Jan. 11 peace deal signed with Bozize in Libreville, Gabon.

“We are still keeping to the spirit of Libreville,” he said.

The deal included the appointment of an interim prime minister, Nicolas Tiangaye, at the head of a national unity government and plans to hold elections within three years.

“We are not here to carry out a witch hunt,” Djotodia said.

The US said it was “deeply concerned” by events in CAR. “We urgently call on the Seleka leadership which has taken control of Bangui to establish law and order in the city and to restore basic services of electricity and water. We also urge all parties to allow for unhindered humanitarian access,” said a State Department spokeswoman.

French Foreign Minister Laurent Fabius called on all parties to the conflict to establish a government in keeping with the Libreville deal and called on armed groups to, “respect the population.”

The African Union condemned the overthrow of Bozize, threatened sanctions against the Seleka leaders and urged member states to take “unified, decisive action.”

United Nations Secretary General Ban Ki-moon decried the “unconstitutional seizure of power” and called for “the swift restoration of the constitutional order.” Ban also signaled his concern at “reports of serious violations of human rights” since the rebel takeover.

Since Sunday, reports of looting and abuses have been rife in the capital, where water and power have been cut off. The country office of the UN children’s agency, UNICEF, and hospitals were among the premises looted by armed gangs. Many of the city’s residents barricaded themselves at home fearful of the lawless streets outside.

“There's a lot of looting by armed men,” city resident Nicaise Kabissou told Agence France-Presse. “They break down the doors to go looting and then, afterwards, the people come and help themselves too.”

By Monday morning, calm reportedly had returned to the capital as the people of CAR waited to see what kind of leaders they have gained over the weekend.