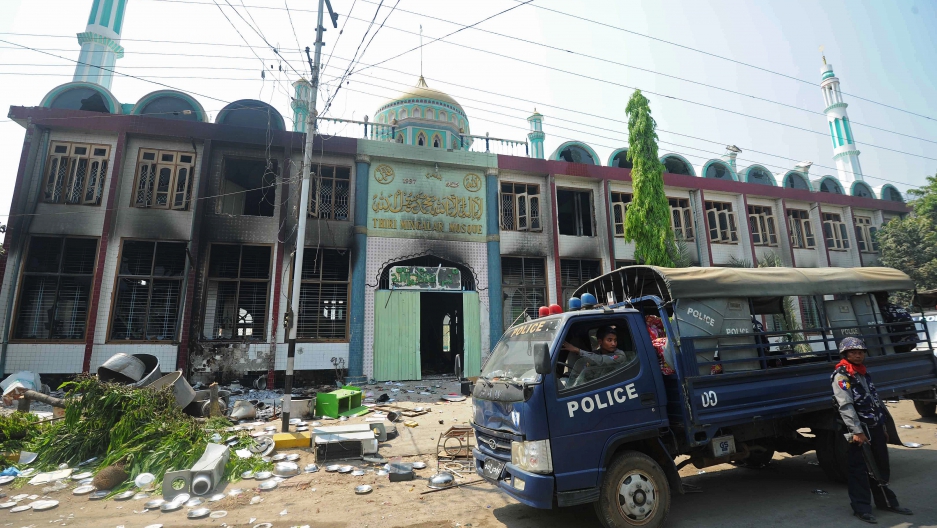 Policemen stand guard outside a partially-burnt mosque in riot-hit Meiktila, central Myanmar on March 22, 2013. Charred bodies lay unclaimed on the streets of a riot-hit town in central Myanmar, witnesses said, as global pressure mounted for an end to the Buddhist-Muslim unrest. Parts of Meiktila have been reduced to ashes in the most serious communal violence to hit the former junta-ruled nation since last year, leaving the authorities struggling to bring the situation under control
Credit: Soe Than Win
Share

YANGON, Myanmar – The latest round of sectarian violence in Myanmar seemed to be quieting over the weekend after the government declared a state of emergency and sent army troops to the area, leaving thousands homeless and more than 50 people confirmed dead.

Video footage and photos taken at the scene by the local media and wire agencies showed that three days of rioting has transformed the town of Meiktila south of Mandalay in central Myanmar into a war zone scattered with burnt houses, mosques and unrecognizable human dead bodies.

The local media reported on Saturday that at least 9,000 people were left homeless and are taking shelter in makeshift camps outside the town or at Buddhist monasteries in the town.

The violence began on Wednesday afternoon after a brawl between a Muslim gold shop owner and a Buddhist customer, but the apparent lack of law enforcement has led mobs to carry out arson attacks against Muslim residential quarters and engage in looting and murders with impunity.

“I am still in shock and fear,” said Hla Maung, one of 2,000 Muslim victims sheltered now in the football stadium outside the town. His home was destroyed by a mob on Thursday night but with the help of his Buddhist neighbors, he spent a night at a Buddhist monastery and joined fellow refugees yesterday evening.

Myint Than, an eyewitness who saw the charred human bodies in the town yesterday, said that police have merely stood by while the arson attacks and the killings occurred over the past few days.

“The police said they had no order to shoot. So this created a lot of lawlessness in the town,” he added.

Min Ko Naing, a leader of influential 88 Generation Students Group, who visited the conflict area on Thursday, also blamed the security forces’ idleness for the deadly violence. “It is totally unacceptable that the security forces did not take any actions just because they were not ordered to. I would point this out again and again,” he said in an interview with Radio Free Asia.

However, Ye Htut, the official spokesman of the government, has defended the police actions and he was quoted in the local media as saying that the situation got out of hand because of the opportunist individuals who took advantage of the unrest.

A series of political and economic reforms have taken place since the military rule ended and a new civilian government led by former military generals including the President Thein Sein took office two years ago.

The sectarian violence last year killed hundreds and left 80,000 homeless, according to UN statistics. Occurring twice last year in the Rakhine State of western Myanmar, the spate of violence between Buddhists and stateless Rohingya Muslims has mired the image of the civilian government.

Since then, anti-Muslim sentiment has evidently increased in the country and some Buddhist monks publicly called for a boycott of Muslim businesses — against which the authorities took no actions at all.

Some observers suspect that the former generals ruling the government and the army which remains as powerful as ever are trying to divert the public attention with sectarian violence and hatred because of the growing public protests stemming from old grievances against the abuses by the army such as land grabs.

Myat Ko, an official from Yangon School of Political Science, accused the high-ranking military generals of having a hand in the latest clashes.

“We don’t have the evidence to prove it. But this is happening in our country,” he said.
According to Dr.Maung Zarni, a visiting fellow at London School of Economics, the army is creating chaos which will continue to strengthen its centrality in politics.

Writing on his Facebook page today, Zarni said, “There is a consistent and recognizable pattern of violence: the plan is hatched elsewhere. Out-of-town armed mobs are bused in to a targeted locality. All hell broke loose. The police and military stand by until the job is done. Local authorities would say they are waiting for orders from above, which never come.”

However, Hla Maung Shwe, a leading member of Myanmar Peace Center, a state-backed body involved in peace negotiations with the country’s armed ethnic groups, dismissed all these allegations as false, saying that the government officials and authorities would not smear their own dignity by creating riots.

“They would not do this kind of thing,” he said.

Currently, both Buddhists and Muslims are concerned about the spread of similar clashes in their areas.

“We are all feeling nervous. We are losing sleep and diet these days, thinking when it will be our turn.” said Wunna Shwe, co-secretary general of Islam Council based in Yangon. “Rule of law and greater efforts to increase friendships between the two communities will be important in preventing further clashes.”