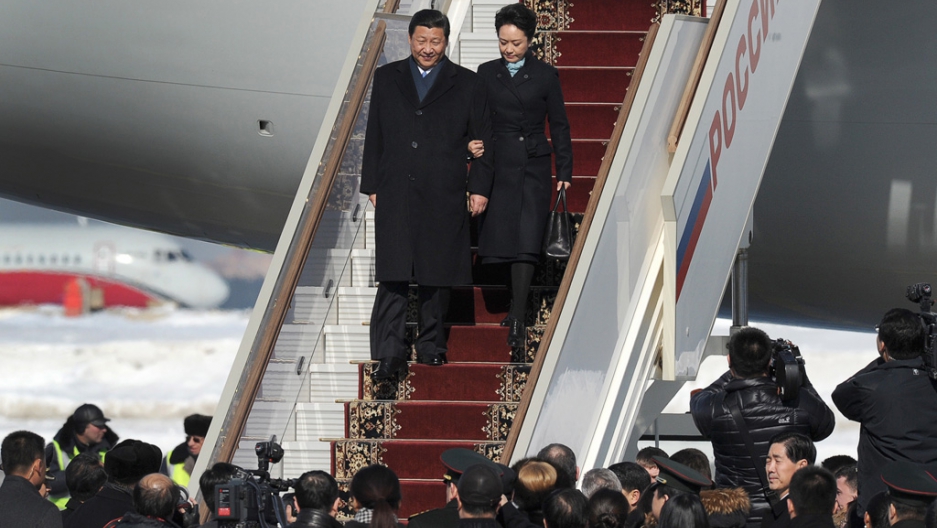 Chinese President Xi Jinping and his wife Peng Liyuan arrive at Vnukovo airport outside Moscow on March 22, 2013. Xi Jinping arrived today in Moscow on his first foreign trip, to cement ties between the two countries by inking a raft of energy and investment accords.
Credit: ALEXANDER NEMENOV
Share

Look out, FLOTUS, you have a challenger for most blogged about first lady.

Chinese media are offering nearly exhaustive coverage of Peng Liyuan as she accompanies her husband, President Xi Jingping, on his visit to Russia this week.

Garnering as much attention as Xi’s commentary on foreign interference and Sino-Russian oil agreements is Peng’s debut on the political scene.

“China’s quest for a graceful first lady is over,” one commentator on the micro-blogging Sina Weibo website said, according to BBC.

Peng is well known in China thanks to a successful music career.

Now, she’s getting praise for her choice of wardrobe as she accompanies her husband on official state business.

More from GlobalPost: Policy on North Korea needs to give a higher priority to human rights

“China’s first lady is no longer an old lady,” lawyer Zhang Haimiao said, also through Weibo. “I wish China’s future could be refreshed just like this first lady’s appearance.”

Others in China are comparing her to Michelle Obama and Carla Bruni-Sarkozy, the former French first lady.

Still, China’s first couple was praised for matching their wardrobes with their personal styles.

“The first couple’s outfits were low-profile, graceful and comfortable, their simple and tidy hairdos, Peng’s handbag and shoes as well as the colors of their scarves all matched with each other very well,” fashion designer William Tang told the South China Morning Post.

Peng's coat was the particular object of attention.

Just hours after the first images were broadcast of her descending from the aircraft in Russia, copies of the garment were being offered on the Internet shopping site Taobao (China's version of eBay) for between 499 and 10,000 yuan ($80 and $1,600).