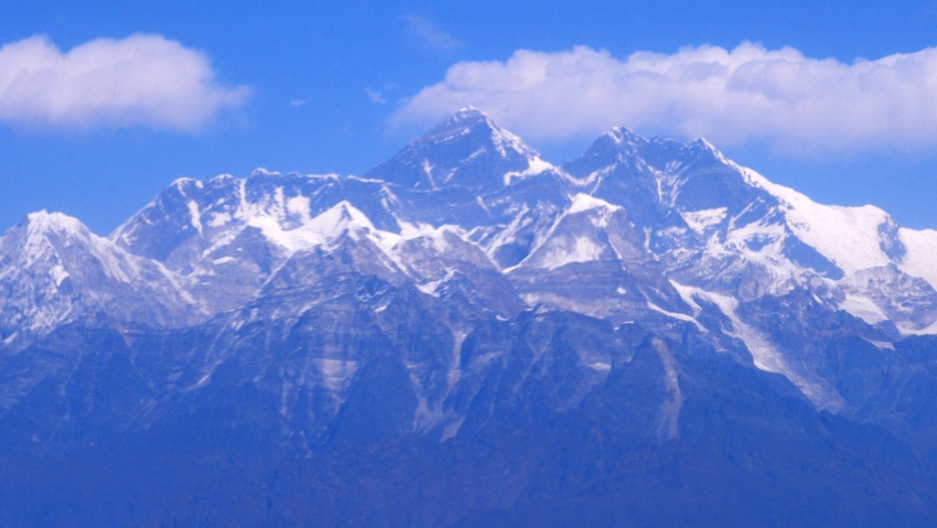 MOUNT CHACHANI, Peru — The distance between us grows slowly but surely in the gray light of dawn as we head up the steep snowfield 18,000 feet above sea level.

It is not that Richard Hidalgo, Peru’s most accomplished mountaineer, is setting a blistering pace. In fact, he’s taking short, deliberate strides.

But his metronomic rhythm toward the 19,872 foot summit of Mount Chachani is relentless.

Unlike me, he doesn’t need to stop to catch his breath every few seconds, readjust his backpack, or just take in the stunning view of arid, rocky valleys through the clouds below.

Hidalgo is here to prepare for an attempt at Mount Everest in April. If he succeeds, it will be his fifth of the world’s 14 summits over 26,256 feet (8,000 meters).

Only 26 people are confirmed as having climbed all 14 so far.

Exactly half did so without oxygen. Many more have died attempting these Himalayan giants.

If the discombobulating symptoms of altitude weren’t bad enough, exhaustion and sleep deprivation multiply the effect.

I set off for Chachani from high camp at 3 a.m. Hidalgo left an hour later in the certain knowledge he’d easily overtake me.

Much earlier starts than that — including before midnight — are routine in mountaineering to allow dawn summiting and descents that avoid dangerous afternoon conditions of melting snow and ice.

In the Himalayas — unlike here in the lower, tropical Andes — Antarctic temperatures and unimaginable windchill factors make frostbite a constant threat. “Pee bottles” are a must.

Although it’s considered a “non-technical” peak, Chachani nevertheless packs serious altitude, requiring an ice-axe and crampons near the summit, if no rope, harness, helmet or other gear.

“The idea is to acclimatize without using up my reserves of energy and patience,” says Hidalgo, 42. “I’ll be needing those for Everest.”

Despite living at sea level in the Peruvian capital Lima, Hidalgo has scaled some of the world’s highest peaks in the purest style, without oxygen, solo — meaning no sherpas beyond base camp — and in extremely fast times.

He’s also turned on its head the received wisdom that a mountaineer should accumulate fat reserves before spending harsh, long weeks pushing his mind and body to the limit.

The late Polish climber Jerzy Kukuczka, the second person to summit all 14 8,000ers, once recalled how strangers were surprised by his pot belly. He then pointed out how quickly it vanished in the Himalayas.

However, Hidalgo is heading to Everest with just 7 percent body fat, similar to a professional marathon runner or Tour de France cyclist.

No wonder he’s a growing celebrity in his homeland, with a lengthening list of sponsors and TV commercials to his name.

He prepares for his trips with daily 15-mile runs in Lima and by spending long weekends scrambling around the 16,000-foot Andean peaks a hair-raising three-hour drive east of the city.

“I wouldn’t say he’s a mutant, but that is very unusual — to be able to go up and down from sea level to high altitude like a yo-yo without ill effects,” says Peter Hackett, a doctor who is director of Telluride’s Institute for Altitude Medicine.

In the final month before setting off for Asia, Hidalgo heads to Peru’s third city, Arequipa, where Chachani and several other huge peaks dominate the skyline.

Being supremely fit is a given for a mountaineer. But it’s not a substitute for being acclimatized, a process that can only be achieved by spending time at altitude.

Indeed, many top athletes have suffered intense altitude sickness, including soccer pros from Brazil and Argentina playing in the Bolivian capital La Paz, the world’s highest at 12,000 feet.

“The best predictor of whether you’ll get altitude sickness or not is whether you had it before,” says Thomas Dietz, an American doctor who’s worked in Nepal and is the author of the "High Altitude Medicine" guide.

Hidalgo has the mountains in his blood, almost literally. There are just three populations, Himalayans, Ethiopians — world-class standouts in distance running — and Andeans, that have genetic adaptations to altitude.

They include the obvious, such as larger lungs and more oxygen-carrying hemoglobin, as well as esoteric variations of the body’s biochemical “pathways” that only scientists and doctors understand.

Those adaptations protect from mountain sickness and, to a lesser extent, the real high-altitude killers: pulmonary and cerebral edemas, fluid in the lungs or brain.

None of which diminishes Hidalgo’s accomplishments as he continues on his 14-8,000 quest.

“To do this, you need to absolutely love mountaineering,” he says with monumental understatement. “It’s just too much suffering if you’re not committed 100 percent.”

Symptoms of mountain sickness, which normally wear off after a few days at altitude, include headaches, nausea, fatigue, loss of appetite, drowsiness and, paradoxically, insomnia.

At the highest altitudes, acclimatization is no longer possible: intense mountain sickness and confused decision-making are a constant lethal threat. Mountaineers refer to altitudes above 26,000 feet as the “death zone” to be passed through as quickly as possible.

Edemas occur suddenly either at very high altitudes or after abrupt jumps in height.

They can be treated only by rapid descent, simulating lower altitudes with a gamow bag, or by an injection of the anti-inflamatory dexamethasone.

Some climbers, usually wealthy clients rather than pros like Hidalgo, even take dexamethasone preventively on summit day — a tactic that may save lives but has yet to be fully studied by doctors.

Another medication sometimes used is Viagra, which can prevent pulmonary edemas by opening up blood vessels.

Getting the unwanted side-effect of an erection is unlikely while shivering away at more than 25,000 feet, Dietz notes, although he qualifies his statement: “I don’t think that’s been studied.”

However, the effects of altitude become less intense with age, particularly in the case of cerebral edemas.

One reason is that the brain shrinks from adolescence, leaving more room inside the skull for swelling as a result of altitude without building dangerous pressure. That helps explain why Hidalgo’s profile, of a super-fit 40-something, is typical of world-class mountaineers.

More from GlobalPost: Cerro Rico: The mountain that eats men

Back on the upper reaches of Chachani, Hidalgo rounds a wall of rock high above me as the early morning sun begins to beat down and finally pulls out of sight.

Predictably enough, keeping up with him even on this relatively straightforward peak, has proved impossible.

He’s in good shape for Everest. And I’m looking forward to following him every step of the way — on Facebook.