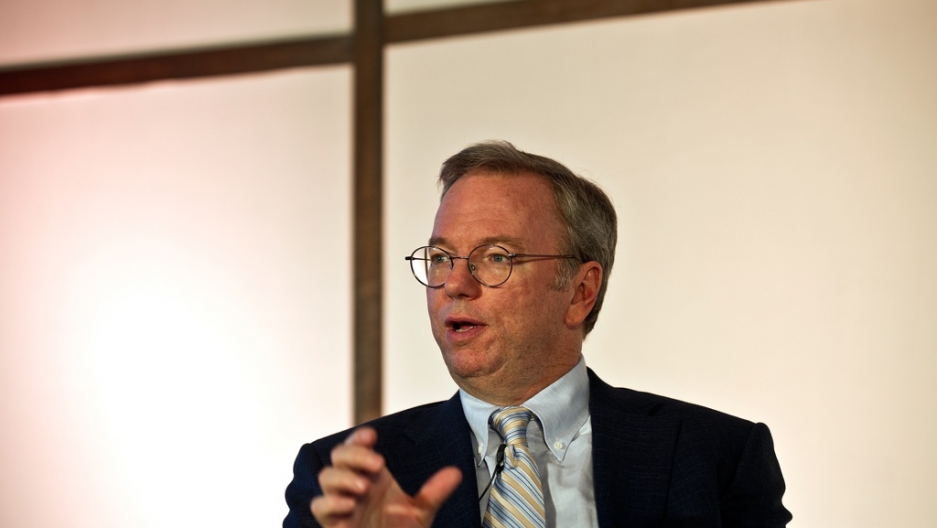 Google Executive Chairman Eric Schmidt gestures as he addresses a gathering at the National Association of Software and Services Companies (NASSCOM) startup event in New Delhi on March 20, 2013. Schmidt is in the Indian capital to take part in the Big Tent Activate summit on March 21.
Credit: Manan Vatsyayna
Share

YANGON, Myanmar — In Myanmar, where connection speeds often recall the dark days of dial-up modems, Google's chief had this message for university students: "Don't let the government control the Internet."

Eric Schmidt, the tech giant's executive chairman, is in Myanmar this week to sit down with the nation's president, Thein Sein, as well as local businessmen and students. His visit follows a high-profile trip to another wilderness of Web connectivity, North Korea. He is the first big name in technology to fly to Myanmar, formerly titled Burma, a poor nation still attempting to transition from an authoritarian police state to a more open society.

In Schmidt's most public outing in Myanmar, he told students and tech entrepreneurs that "Myanmar was a formerly inaccessible country but the Internet will make it impossible to go back," according to the US embassy's Twitter account (@USEmbassyBurma) which published details of the speech.

Myanmar's tech sector is in its infancy as commercial and authoritarian restraints have stunted its growth. Only in recent years have SIM cards — the chips that equip mobile phones with a unique dialing number — become available for less than $250. (Most Southeast Asian nations sell them for under $5.) And only in 2011 did the government unblock YouTube.

The number of citizens with Internet access is often pegged at less than 1 percent. But this figure, derived from 2010 government stats, doesn't account for the spread of Web cafes throughout Myanmar's cities and provinces and the relatively recent arrival of Web-capable SIM cards. True figures are hard to come by in a nation that doesn't even know its own population figures. The last census took place decades ago.

The rise of Internet access in Myanmar has already shaped the way citizens communicate. Government officials announce breaking news on their Facebook walls. News outlets, still parlaying with authorities for the right to print daily editions, can skirt restrictions with frequent updates to their Web sites. And Facebook has played a role in circulating graphic images from Myanmar's more troubled corners such as Rakhine State, torn by religious violence, and Kachin State, home to a still simmering conflict between troops and guerrillas on the Chinese border.

In Yangon, according to the US Embassy's Twitter feed, Schmidt told the crowd that technology could empower individuals and that one mobile phone in one village could potentially record injustices.