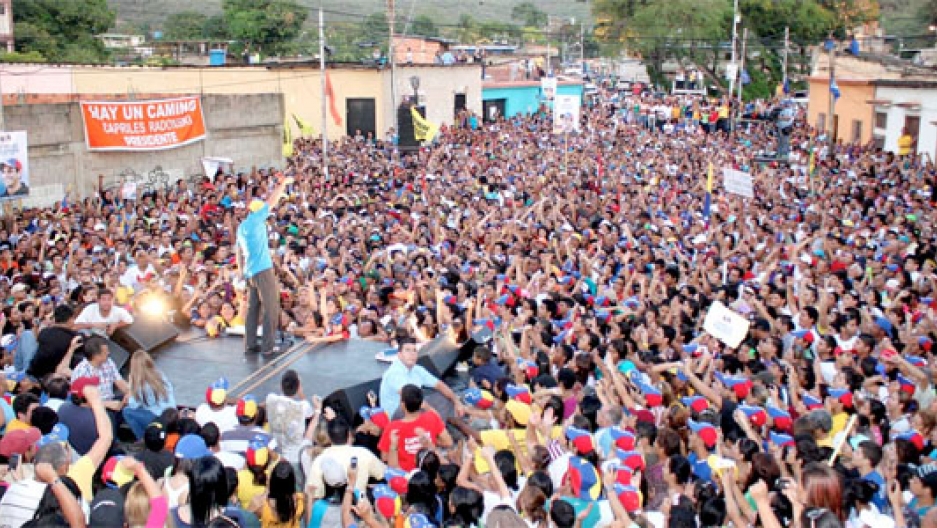 Venezuela's two presidential candidates are stumping for votes but they don't have a lot of time. President Hugo Chavez died of cancer on March 5th, and the country has called a snap election for April 14th.

The compressed schedule is especially problematic for opposition candidate Henrique Capriles, who is a huge underdog. Capriles lost to Chavez in last October's election. Now he faces Acting President Nicolas Maduro, whom Chavez named as his successor.

Maduro has a huge campaign war chest, and he's giving away free government houses to poor people. His every move is covered by pro-government TV, which dominates the airwaves.

Maduro is banking on a massive sympathy vote in the wake of Chavez's elaborate funeral. Chavez won a huge and loyal following by investing billions of dollars in programs to lift Venezuelans out of poverty, which is why Maduro invokes Chavez's name at every opportunity. According to a website tracking his speeches, Maduro has mentioned Chavez more than 3,400 times in the 17 days since his death.

By contrast, the Capriles operation is more seat-of-the-pants. I almost get lost trying to find his national campaign headquarters in Caracas because there's no sign on the building.

Inside, workers are rushing to paint offices, hang electoral maps and sign up volunteers. One of them is Andrea Radonski, Capriles' godmother. She says they're scrambling to put together a campaign in 30 days.

"We wake up very, very early," she says, laughing. "Some call people. Some look for money. Some look for food. If we have the time to make a t-shirt or a hat – I mean, we cannot sit and think 'Can we do it?' You have to do it today."

The Capriles campaign benefits from the knowledge, experience and support networks from last year's presidential run. Yet many potential supporters remain demoralized because Capriles lost that race to Chavez by 11 points. Now, workers have to convince potential volunteers and voters that Capriles has a fighting chance.

In one room, two dozen women learn how to set up phone banks to spread the gospel of Capriles. One of their toughest jobs is to rekindle last year's excitement, says Camala Joly, a volunteer.

"You fight the battle, I mean there is no other way," Joly says. "You just go ahead and try to motivate people because we Latin people are very up and down."

Capriles has pledged to campaign in all of Venezuela's 23 states. But his tour got off to a rough start when the government, citing bad weather, closed the airport where his plane was scheduled to land. Capriles called it sabotage.

Then, there's the cash problem. Although many businesses complain about the government's socialist policies, they also have government contracts. And they fear retaliation if they donate to Capriles.

"Forget about it," says Carlos Romero, a Caracas political analyst.

So why is Capriles even running? He's only 40, but if he loses back-to-back elections within just six months, some say it would spell the end of his presidential ambitions.

"There was no time for an alternative candidate," according to veteran political reporter, Roberto Giusti. "Capriles is the only one with national name recognition."

Under normal circumstances, Capriles would have a shot at victory. The currency has just been devalued; crime is rampant; and the government is becoming increasingly authoritarian. However, Chavez built up a huge following by spending Venezuela's oil wealth on social programs, and before dying, he instructed his minions to vote for Maduro.

At Capriles headquarters, campaign workers take inspiration where they can find it. Some have watched the movie "NO," about the 1988 plebiscite that brought an end to Chile's military dictatorship.

They'll have to work even harder, according to one of the latest polls. It shows Maduro leading Capriles by 14 points.