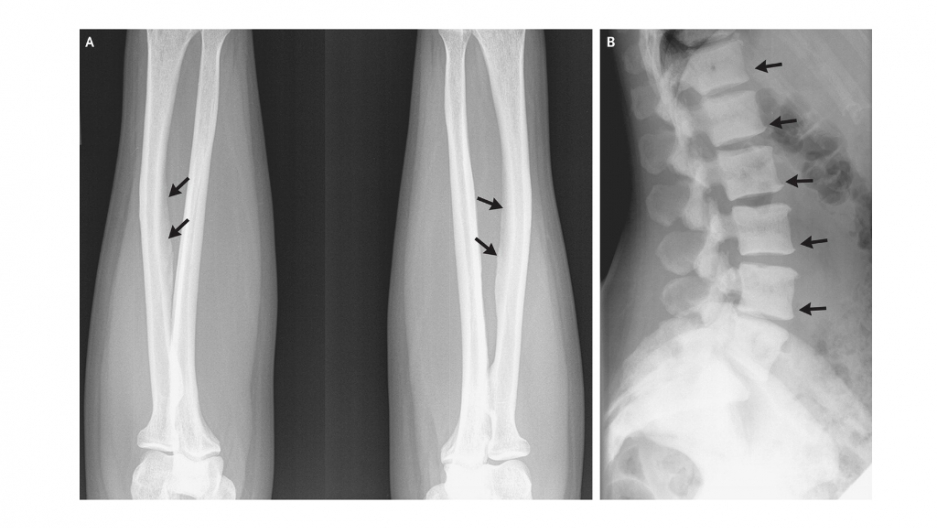 An X-ray shows the calcifications that developed on the ligaments (left) and spine (right) of a 47-year-old Michigan woman who drank a pitcher of tea made from at least 100 tea bags every day for 17 years.
Credit: New England Journal of Medicine
Share

Researchers say drinking too much tea can cause a rare bone disease.

But just how much tea? Turns out, quite a lot.

A 47-year-old Michigan woman developed skeletal fluorosis after drinking a pitcher of tea made from at least 100 tea bags every day for 17 years.

The bone disease, very rare in America, is caused by drinking too much fluoride.

The mineral is found in tea as well as water.

According to the New England Journal of Medicine, the woman visited doctors at Henry Ford Hospital in Detroit after experiencing pain in her arms, legs, hips and lower back for the past five years.

X-rays revealed dense bone material on her spine and calcifications of the ligaments in her arms,  researcher Dr. Sudhaker D. Rao wrote in the study.

Fluoride levels in the woman's blood were four times higher than normal.

Excess fluoride is usually flushed out of the body, but mineral deposits can form on the bones if someone ingests that much, Rao said.

Doctors told the woman to stop drinking tea, and her symptoms showed improvement.