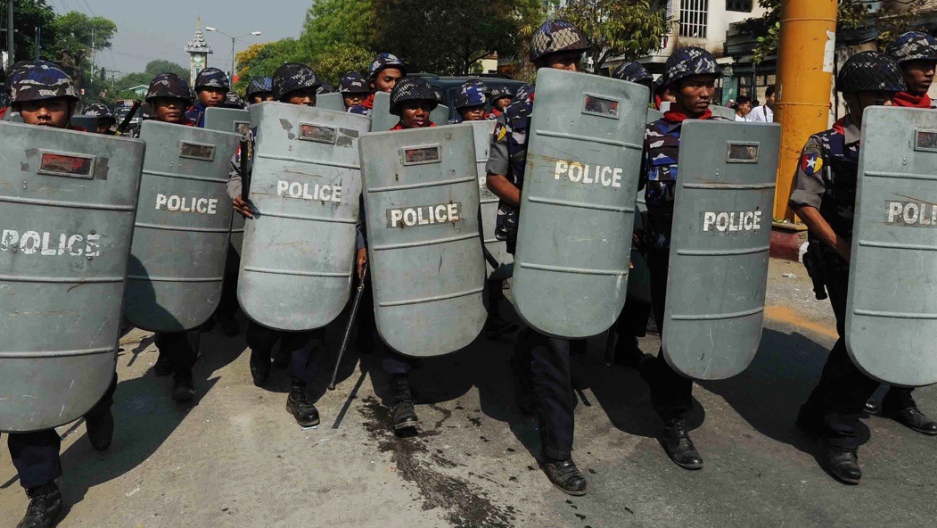 Policemen form a line as they patrol in riot-hit Meiktila, central Myanmar on March 22, 2013. Myanmar declared a state of emergency on March 22 for a riot-hit town where 20 people have been killed in Buddhist-Muslim violence that has sparked fears of spreading unrest.
Credit: Soe Than Win
Share

YANGON, Myanmar — The images now streaming out of Meikhtila, a town in central Myanmar, are sickening.

Bodies are charred nearly beyond recognition and strewn about streets. Quarters of the city are torched so thoroughly that only cement walls and tin roofing stick out from the rubble.

These sad scenes are the outcome of brawls and arson attacks between Buddhists, the nation's dominant religion, and Muslims. As is typical in Myanmar, the Muslim minority appears to have received the worst of it, according to multiple reports in Myanmar's local media.

The body count is officially reported at five but that is almost certainly an underestimate. It's easy to count more than five corpses from photos collected from various wire agencies.

The town now seems to be roiling and highly difficult to access, particularly for foreign journalists. The local photographers who are braving the streets appear to be enduring threats. According to a tweet by Thomas Fuller, a New York Times reporter, one Associated Press photographer was forced to hand over a memory card full of photos at swordpoint.

A parliamentarian tells The Irrawaddy news outlet that roughly 1,000 people had gathered to "besiege" a Muslim neighborhood. Other reports of frightening harassment against local reporters are circulating in the journalism rumor mill.

The clashes are said to have sparked off after a petty dispute in a gold shop. How it started is far less relevant than the indisputable fact that tension between Buddhists and Muslims is fast becoming one of the thorniest and least-anticipated problems in reform-era Myanmar.

These riots in the country's sun-baked interior recall ongoing violence on the coastal flatlands near Bangladesh in a region called Rakhine State. Politicians and authority figures have attempted to play down the religious themes in that crisis and instead argued that many of the region's Muslims — particularly the Rohingya, a stateless ethnic group — are illegal immigrants from Bangladesh that don't belong there in the first place. Rohingya leaders, along with international groups such as Human Rights Watch, insist they've lived there for centuries.

But these arguments won't work in Meikhtila, a Mandalay Division town that's nowhere near any of Myanmar's foreign borders. It's difficult to see these riots as anything other than clashing along cultural and religious lines.

Myanmar's Buddhist monks — widely seen as heroic icons for leading protests against the domineering military — don't always sound so peaceful when the subject of Muslims comes up. While reporting an unrelated story in Mandalay last week, I asked a 27-year-old monk for his thoughts on the Muslim Rohingya. "They're extremely violent people," he said. "They're brutal. They rape girls. They're kalars." The word "kalar" is a highly derogatory Burmese term often applied to Muslims, particularly those with dark South Asian complexions.

"Even in big cities like Mandalay, we also call the local Muslims 'kalar' as well," he said. "But at least they're not violent. Not like the kalar in Rakhine State who burned down our temples and attacked our villages." Disclaimer: This viewpoint is not universal and other monks I've spoken to in the past have urged nothing less than brotherhood and compassion toward Muslims.

Diversity is one of Myanmar's greatest qualities and its myriad ethnic groups add great depth (not to mention an array of mouth-watering dishes) to the country's national culture. First-time visitors to Yangon who arrive in search of golden temple spires are sometimes surprised when a pre-dawn call to prayer emanates from mosques around their hotels. Those who imagine Myanmar from afar don't often realize that Muslim men with chinstrap beards and women in pastel hijabs are a common sight here.

As the government begins to move away from police state tactics and shackles on expression, it appears that Myanmar's notorious iron grip may have helped keep certain communities from each other's throats. The nascent movement toward greater freedoms of protest and speech is undeniably positive. But as the lid continues to peel back, we can expect to hear expressions of rage mixed in with yearnings for greater liberty.