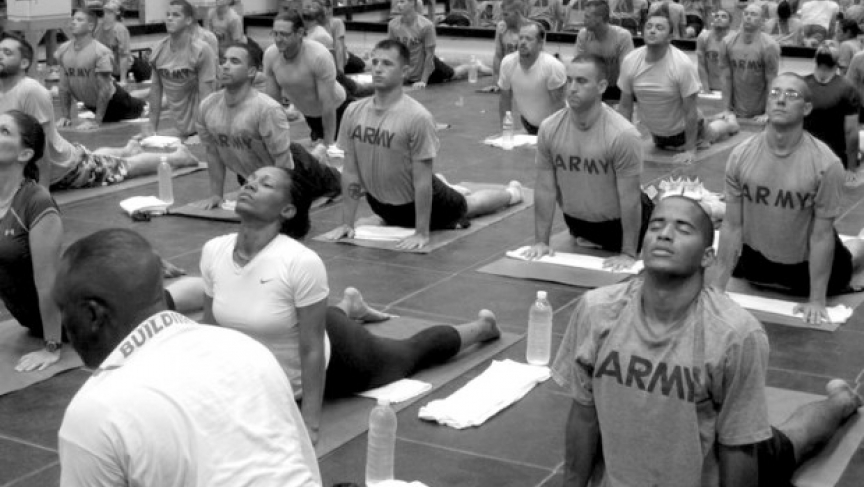 US soldiers participating in the Yoga For Veterans program. (Photo: Give Back Yoga Foundation)

Yoga's not usually the first thing that springs to mind when thinking about treatment for post traumatic stress disorder in veterans. But from the Veterans Administration to the Pentagon, yoga classes are becoming not just commonplace, but in some rehabilitation programs mandatory.

One of the places in the forefront of change is the Newington Yoga Center, in Newington, Connecticut.

About 20 veterans train to become yoga teachers. Suzanne Manafort of the Veterans Yoga Project, said what began as a small project has burgeoned into programs across the country. Manafort taught yoga for years before using it as a treatment for PTSD. She said she had no idea she might need to make adjustments to her teaching, until she made mistakes.

"Touching is a mistake. In yoga classes we touch all the time. But to somebody whose been sexually assaulted that's a huge violation. Walking behind them is a huge mistake because it feels like they have to pay attention to what's going on in the room instead of just practicing their yoga practice," Manafort said.

She said ultimately it was veterans themselves that guided her, in some cases just by the courage it took simply to stay in class.

"Some of the men and women that I work with are Vietnam Veterans so they've been at home suffering for 40 years," said Manafort. "And when they come into this treatment program and they're told they have to do yoga, 'they're like are you kidding me?'"

"I thought it was a joke," said Vietnam veteran Paul Gryzwinski. "And I remembered actually laughing out loud and they said no we're really not kidding you're going to be going to yoga."

Gryzwinski is training to teach yoga to veterans. Many years after returning from the war, PTSD hit him hard. He ended up turning to the VA. Where he first encountered yoga.

"And I just thought of myself in like, tights with you know a bunch of women. And I know that sounds sexist — and I'm not, so forgive me — but it was such an alien concept to me," Gryzwinski said with a chuckle.

And Gryswinski's early misperceptions are one reason that Dan libby, a co-founder of the Veterans Yoga Project, said the 12 week yoga training for treating vets with PTSD tries to strip all the new-agey stuff out.

"We really emphasize, 'leave all the Sanskrit names at home, right. Leave the candles at home, don't talk about you know moonbeams and chakras and all these things,'" he said. "It's really just about learning about your body and your experience; learning to breathe."

Lt. Col Melinda Morgan deployed right after 9-11 and started teaching yoga to those who had served and those who were preparing to go to Afghanistan.

"So I started teaching veterans 10 years ago and one of those veterans that I taught became an instructor himself. And so in 2007 when he was in Iraq and I was in another location, he writes me a note that said, 'I have to teach yoga and I don't think I can.' So I'm like, 'yes you can.' I wrote it down all of the poses, emailed it to him and helped him on his way to become a certified teacher," Morgan said.

Today, Morgan teaches at the Pentagon, and she said classes once sparsely attended are now full every day. But despite an increased demand for yoga paired with a growing number of alternative treatment programs in the military and the VA, there's scant hard science about why yoga or most of the other alternative programs work.