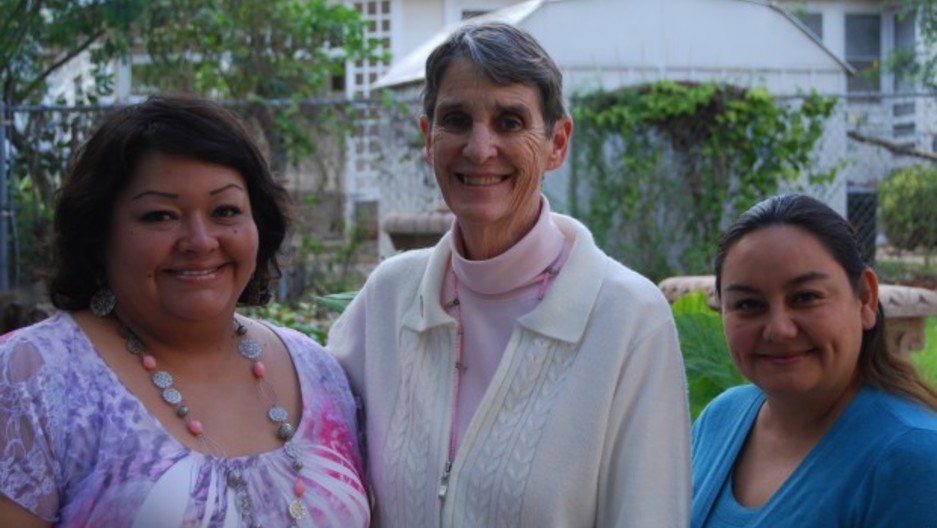 Sister Rosemary Welsh, center, with two immigrant women who were victims of domestic abuse and got counseling at Casa de Misericordia. These women are in new relationships and recently acquired US visas. (Photo: Jason Margolis)

Share
Most of the women who come to Casa de Misericordia, or House of Mercy, in Laredo, Texas, are undocumented immigrants. For many, it's hard to see a way out of an abusive relationship. "One of the ways men would keep them in a domestic violence situation was saying that I am a US citizen, or I am legal permanent resident, and you call the police, and they will deport you and I will stay with the kids," said Sister Rosemary Welsh, the group's executive director. "So it was a way of terrorizing the women and also keeping them in bondage and keeping them in a violent situation." Abused women, as well as some men, have been coming to Casa de Misericordia for 15 years, seeking shelter, counseling, and legal assistance. I sat down for coffee and snacks with five women who have received counseling here. They chose not to give their names. They shared horrible stories of physical and emotional abuse. One woman, for example, said her husband would leave her and her children at home without any food. She was afraid if she left the property, he'd have her deported. She says she survived because her son hunted squirrels and rabbits. Today, she's in a new marriage, working as a makeup artist, and is taking courses at a local college. And she has a visa. A woman by her side also got a visa last year. "I feel better, relieved," she said. "I have a good opportunity for job, for studying. My life changed 360 (degrees), great." A young woman at the table said softly, "She got her freedom." The two women with visas got their freedom thanks to the Violence Against Women Act, VAWA for short. The law provides funds for the prosecution of violent crimes against women, including those who are undocumented, and helps coordinate community responses. The Act was originally signed into law in 1994. It was most recently renewed by Congress and signed into law by President Barack Obama in March. The women I met wanted to highlight their stories of redemption. But not all have been so lucky. Many women fear not just their abusers but also increased border security. Before the September 11th terrorist attacks, border patrol here was largely contained to the actual border. The women said border patrol agents are now at the bus stops, stores, and restaurants. They're on bicycles and in helicopters. "Now you see them everywhere, through schools, everything. They're everywhere now," said one woman who has been living in Texas, without papers, for 13 years. Her mom sat next to her and spoke in Spanish. She translated. "We don't do much stuff, we don't go out, or we don't look for a job because we're scared. There's always that fear that either they're going to catch us, there's always fear when driving." Many women can't get visas through the VAWA. First, there are legal fees — attorney's fill out affidavits, process papers and help women navigate the system. Costs add up and it's hard to find a pro bono lawyer. The victim also has to prove abuse. This can be difficult enough, and Sister Rosemary said heavy border security can keep women from venturing out. "So if a woman is raped, sexually assaulted in our community, and wants to do charges against a gentleman, she needs to go to the hospital and do a rape kit. They can't do a rape kit here in Laredo because we don't have a nurse prepared, so they have to go to a hospital in Harlingen (Texas). If they go to the hospital in Harlingen, they can't get back." They said they can't make the 180-mile drive back because border patrol sets up checkpoints along major highways. Anxiety about getting caught can also affect their ability to help their children. One woman spoke about her 6-year-old child who needed treatment for a kidney problem in Corpus Christi, about a 150-mile drive from Laredo. She was afraid to travel along the highway to the hospital. Eventually she says she found a doctor who came to Laredo. She says two years on, her child is doing fine. I asked the five women if any of them had ever been stopped by border patrol. None of them had. But they've heard about Obama administration's record number of deportations, and they worry about being next. Even women who have legal documents get nervous. Sister Rosemary spoke about an elderly woman who violated the rules of her visa. She left Texas to visit family in Mexico. "Don't go back I told her," said Sister Rosemary. "She never got back. We haven't seen her for five years. She called me every Sunday. She's sick, she's going to die, and none of us are going to see her. These are horror stories. That's a real live story." The women I met — both those with and without papers — said they just don't cross the Rio Grande River anymore. One woman teared up talking about the grandson she's never met in Mexico. Other women spoke about teenage nieces and nephews they'd never met, and funerals of parents they'd missed. The women here are angry with politicians in Washington. They said they understand the need for border security and the agents. And while renewing the Violence Against Women Act was a victory for them, they still see a broken immigration system. And many feel like neglected pawns in an un-ending political game.