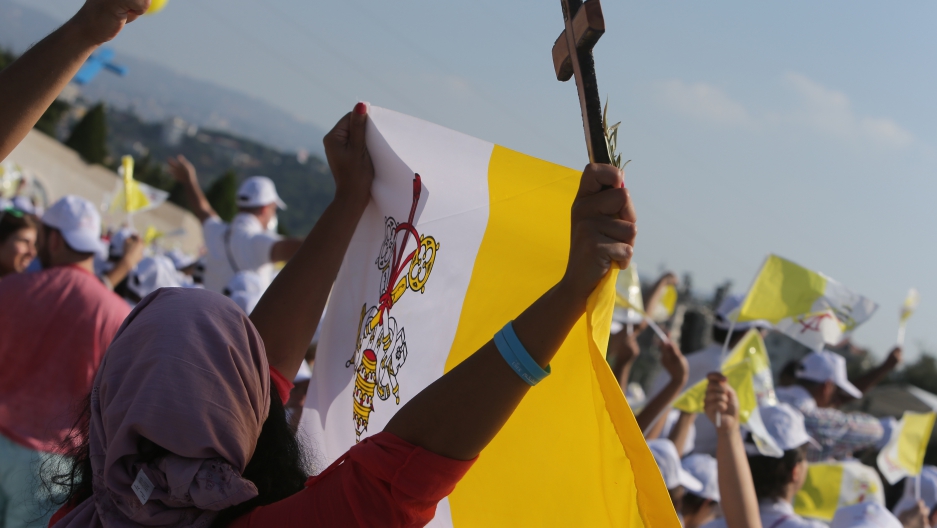 Lebanese Catholic youths cheer Pope Benedict XVI upon his arrival to the Maronite patriarchat in Bkerke on September 15, 2012. Pope Benedict XVI urged Middle Eastern Christians and Muslims to forge a harmonious, pluralistic society in which the dignity of each person is respected and the right to worship in peace is guaranteed.
Credit: Joseph Eid
Share

BEIRUT, Lebanon — Two decades after the end of the Lebanese civil war, Beirut’s once-destroyed downtown is largely rebuilt, and the crucifixes atop St. Maron Church shine brightly as parishioners file out from evening Mass.

But sectarian scars and distrust remain for Norma Nasser, a 60-year-old Maronite Catholic housewife, who is worried about hardline militant groups like Shia Hezbollah and Sunni Salafis who wield growing influence in her country.

“I am afraid of the future, especially for my kids,” she said. “We respect Muslims, but I am not sure they respect us.”

Even though Beirut is no longer cleaved into Muslim and Christian sides by the Green Line — the five-mile long, overgrown barricade erected during Lebanon’s 1975-1991 civil war — some Christians still feel like their presence here is not guaranteed. An influx of refugees from the civil war in neighboring Syria has Christians in Lebanon anxious that religious violence against them could reappear here.

Catholic Maronites account for roughly a fifth of Lebanon’s four million people, and their church is the largest Christian sect of the 18 state-recognized religions. Maronite militias were chief belligerents in the civil war, and during that period the church’s relationship with the Vatican was strained. The Roman Catholic church now holds up peaceful Lebanon as an example of religious coexistence, providing the new Pope Francis with a unique opportunity to advance Christian interests in the Middle East.

But religion and politics are tightly intertwined in Lebanon, and political conflicts are often interpreted as matters of communal survival. Official government business is conducted based on a system of “confessionalism” in which everything from parliamentary positions to marriage licenses are doled out according to the country’s sects. Even simple government jobs like electricity bill collectors are subject to a Byzantine set of quotas designed to maintain religious balance.

Nasser was one of only two dozen people who walked up the aisle to receive communion at St. Maron, whose pews could hold hundreds more.

“Sometimes people come, sometimes they don’t come,” Nasser said, as she headed to a Bible study class in the adjacent cloisters. “Nowadays, they don’t come to church because they believe they need their freedom,” she said with resignation.

Father Simon Faddoul, head of the Catholic charity Caritas Lebanon, said the close link between religious institutions and a government that Transparency International says is more corrupt than 78 percent of the world has led some Catholics to drift from their faith.

“We have many people who try to exploit religion,” he said. “We have opportunist politicians. We don’t have real politicians who really care about the country and the future.”

The inefficacy of the government is exacting a toll on the country’s peace and stability. The country’s population has exploded as hundreds of thousands of Syrian refugees have poured over the border to avoid that country’s civil war. President Michel Sleiman claimed on Wednesday that 1 million Syrians are currently in Lebanon, according to a report in Beirut’s Daily Star newspaper.

Though its fragile political system has not been drawn into Syria’s inferno like many predicted, fear is widespread over how the conflict will end up changing Lebanon. International investment is drying up, tourists are cancelling trips and Lebanon’s previously booming economy slowed from 8 percent GDP growth in 2010 to 2 percent last year, Reuters reported.

The country’s Christians say they need only look at their neighbors to notice a worrying trend: an exodus of Iraqi Christians following sectarian violence, growing resentment and persecution of Copts in post-Mubarak Egypt, and the increasingly sectarian civil war in Syria, where the chant “Christians to Beirut, Alawites to the grave” was coined.

Fr. Faddoul’s charity, which aids tens of thousands of mostly Muslim Syrian refugees with services like food supplies, hygiene kits and rent assistance, came face-to-face with this clash when it tried to distribute aid in the restive northern Lebanese province of Akkar. Muslim fundamentalists demanded that Caritas remove its logo, which contains a crucifix, before distributing aid. Faddoul said told his workers, “You be clear. We help under our cross. Otherwise we are not going to help, and we are not going to do anything.”

Eventually, tensions cooled, the objectors relented and Caritas was able to provide aid freely. Incidents like these, Faddoul said, underscore the reason so many Christians feel increasingly threatened.

“You cannot submit to the will of these people because they are disfiguring Islam and humanity.” And moderate Muslims, he said, “don’t have the guts to stand up to them.”

“These people are turning our lives into hell,” Faddoul added. “Everyone’s lives. Even their families’ lives.”

“Is this what Bouazizi, who burnt himself in Tunisia, aimed at?” Sayah asked. “Those young people who were killed in Egypt, or anywhere else, were really pure, highly committed to promoting human rights.”

Sayah thinks Pope Francis can work with other nations to help alleviate Arab Christian worries, which he said is caused by external forces. “The problem is not local. If Qatar and Saudi Arabia, on the one hand, and Iran stop sending arms tomorrow, the war would stop in Syria,” he said. “The problem is the involvement of people from the outside who have their own interests.”

When Lebanon was in the throes of its own civil war, though, the Maronite Church was split between those who sought to end the war and more militant factions who wanted to wanted to further the church’s role as the traditional protector of Christians in the Levant. Indeed, Bachir Gemayel, leader of the Christian Phalange militia during the civil war, is quoted as saying, “the Vatican should understand that Christians in Lebanon are not guinea pigs for the Christian–Islamic dialogue in the world.”

It wasn’t until fratricidal bloodletting between rival Christian militias spiraled out of control in the late 1980s did the church finally unite behind Vatican initiatives to end the war.

A swath of leaders, from President Barack Obama to Pope Benedict XVI, have identified post-war Lebanon as a model for the world, and Sayah believes that the survival and continuity of Lebanon’s Christians carries global implications.

“If this formula does fade in Lebanon, the message to the world is that religions can’t live together, cultures can’t work together, and the alternative is war of religions,” Sayah said. “This is the importance of Lebanon.”

But the problem is that many young and educated Lebanese people aren’t interested in participating in this model of religious coexistence because life here is tough. The toxic combination of regional conflict, official corruption and economic insecurity means that these days, Fr. Faddoul said, if you ask a young Lebanese man what his greatest ambition is, he will tell you that it is “to get out.”

“This is not right,” Faddoul said. “When you have people leaving the country with disgust, this is a problem, because they won’t be back.”