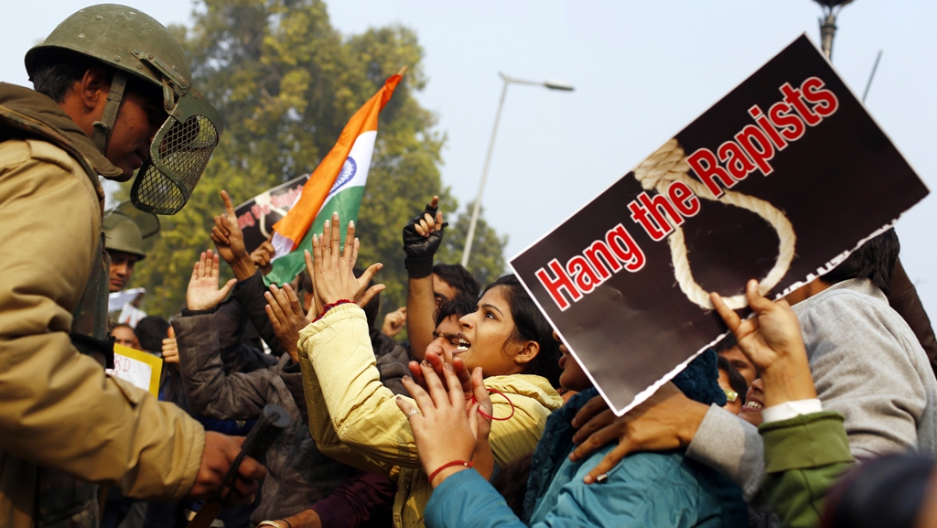 An Indian demonstrator (C) taunts the police during a protest calling for better safety for women following the rape of a student last week, in front the India Gate monument in New Delhi on December 23, 2012. In the biggest protest so far, several thousand college students rallied at the India Gate monument in the heart of the capital where they were baton-charged, water cannoned and tear gassed by the police.
Credit: AFP
Share

Three months after a young woman was fatally gang-raped in Delhi, India has passed a tough new anti-rape bill that increases penalties for rapists and makes harassment a crime.

The Criminal Laws (Amendment) Bill cleared the lower house of parliament on Tuesday and now goes to the upper house, which according to the Washington Post is expected to pass it in the current parliamentary session.

The new legislation, hailed by the Post as a landmark, is intended to send "a loud, clear and deterrent signal that the society will not tolerate such errant behavior," according to Home Minister Sushilkumar Shinde.

The key provisions include:

• A minimum sentence of 20 years' imprisonment and a maximum of the death penalty in cases where the victim dies or is left in a persistent vegetative state.

• A minimum sentence of 20 years and maximum of life imprisonment for gang rape, rape of a minor, or rape by a police officer or figure of authority. Previously it was seven to 10 years.

• Penalties for police officers who fail to file a woman's complaint of a sex crime.

• The definition of sexual assault is expanded to cover molestation and unwanted touching of private parts.

More from GlobalPost: Rape in Steubenville and Delhi: Where's the difference?

Yet activists have complained that much is missing from the bill.

Notably, it does not criminalize the rape of a woman by her husband. That oversight contravenes the Indian constitution, "which considers women as equal human beings who have a right to live with dignity and be free from violence within and outside marriage," Sudha Sundararaman of the All India Democratic Women's Association told the Times of India.

Neither does the bill tackle incest or child trafficking, ban politicians charged with rape from running for public office, or lower the age of consent from 18 to 16, which campaigners had hoped would prevent the unfair criminalization of consensual relationships between teenagers.

Furthermore, there are concerns that "the rush to put tougher penalties in place and defuse public anger over the issue may create further problems for India's already beleaguered justice system," Agence France-Presse said, citing the danger that inadequately trained police would misapply the new laws.

The bill's political opponents went further and claimed that it would criminalize (supposedly) normal behavior.

"Who among us have not followed girls?" asked politician Sharad Yadav of the regional Janata Dal party during Tuesday's debate, in reference to the new provisions on stalking. "The girl may not give us a lift the first time, you have to pursue her and then tell politely. This is the way."

With such attitudes to contend with, it's perhaps not surprising that some activists have welcomed this bill, despite its flaws, as "a major gain."

"It does not address 100 percent of all that we demanded," Kavita Krishnan of the All India Progressive Women's Association told the Post, "but we don’t want to delay or deny what we have got in order to wait for that perfect law."

More from GlobalPost: Hacking vs. rape: Which crime gets more jail time?