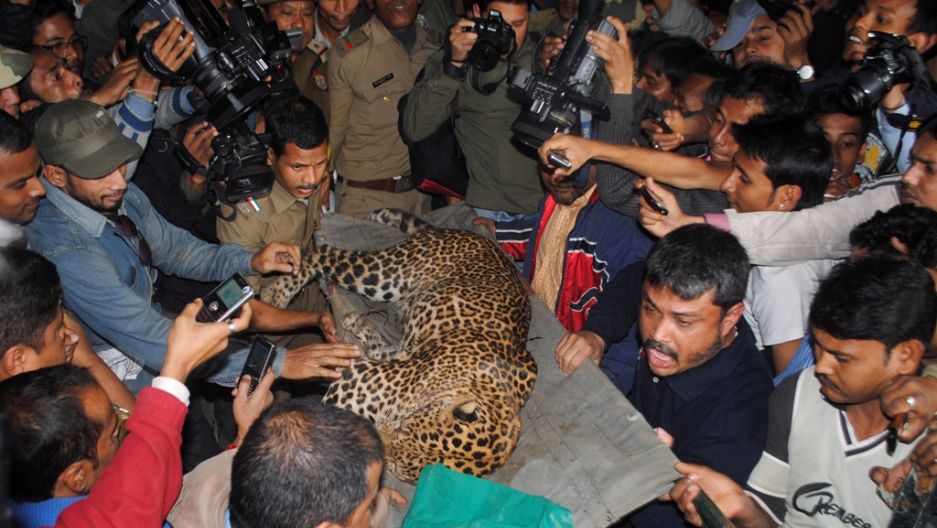 A tranquilized leopard is carried off by park officials after the feline attacked people in Guwahati, India, on Jan. 7, 2012.
Credit: AFP
Share

MUMBAI, India — Swetha Paghe, 50 years old, was crouching in the pitch dark when the leopard came for her this November.

The beast swiftly silenced her screams and dragged her from her slum colony on the outskirts of Mumbai into the scrub forest along the borders of the Sanjay Gandhi National Park. Her fellow villagers quickly formed a search party and set off for the hills. But by the time they found her, she was dead.

“Every day of your life, whether you're eating, drinking, or going outside, you're always wondering [if the leopard is going to come],” said Dilip Navsha Paghe, Swetha's 30-year-old son.

“Now we don't let the kids out of our sight at night,” said Paghe, who has three small boys.

Residents of Aarey Milk Colony and other communities that border the national park have good reason to be afraid of the dark. Over the past decade, the leopards that stalk Bollywood have mauled or killed more than 100 people — even straying onto the studio lots of nearby Film City.

But local news stories of bloodthirsty maneaters obscure an all too familiar reality: India's notorious civic failures, not Mumbai's leopards, are to blame for the killings. And, until recently, forest officials' response to the problem was actually making it worse.

Sanjay Gandhi National Park is a 100 square kilometer “wilderness” surrounded on three sides by a teeming megalopolis. Nearly 30 times the size of New York's Central Park, with a core area that is off-limits to ordinary citizens, the park is home to at least 21 leopards, according to a recent study.

But as many as a million tribal people and migrant laborers live in and around the urban wilderness. And because these communities have been ignored and neglected by the government, their settlements have actually spurred an increase in the leopard population and drawn the animals into the city, rather than driving them deeper into the forest.

“Nowhere else in the world will you see so much wildlife and so many people [living together],” said wildlife biologist Vidya Athreya, who led a yearlong research project on human-leopard conflict that involved the Maharashtra forest department, the Bangalore-based Center for Wildlife Studies and a civil society group called Mumbaikars for Sanjay Gandhi National Park.

“In America, all their wolves have been killed off. They're reintroducing them, and people are scared. In Europe, they have 20 people per square kilometer, and they don't want even one wolf per 100 square kilometers. In India, we kill [our dangerous animals], we poach them, and all that. But we don't think that they all should be wiped out. That's not there in our philosophy.”

Can that philosophy survive? Maybe. Certain tribal groups who have resided in the vicinity for centuries are permitted to build huts and gather firewood on the outskirts of the forest and even inside the park.

However, neither the city, nor state, nor central government has been able to stop migrant laborers from moving in illegally. And nobody provides the battery of services that is needed to prevent the leopard population explosion and protect people from their wild neighbors.

There is no garbage pickup and no plans to provide it, so the villages and slums attract legions of stray dogs. Fat and boisterous, these dogs have replaced the fleet deer and shy wild pigs to become the leopards' primary food source. There are no street lights, no sewers, and no toilets, so to relieve themselves childen and women like Swetha Paghe must squat in the dark near the rubbish heap — where leopards mistake them for their dogs, or settle for them, just the same.

“We tell the people, we meet the corporators, we tell the administration,” said Sunil Limaye, the forest official in charge of the park. “Everybody says, 'Yes, we will do it.' But nobody does it. That is clearly the problem.”

The result is that there are a whopping 57 dogs per square kilometer in the park region, according to the Mumbaikars for Sanjay Gandhi National Park study. The strays have not only lured the leopards to the forest's outskirts, but also spurred a concurrent population boom among the big cats. Using camera traps and spot-patterns to identify individuals, researchers found that the park is home to nearly twice the number of leopards that would be found in a more isolated forest.

“We found 12 females, six males, and three individuals which we couldn't identify [by sex], so a minimum of 21 individuals in Sanjay Gandhi National Park and Aarey Milk Colony, which is an area of about 120 square kilometers,” said the Center for Wildlife Studies' Athreya. “Each female leopard needs 10 square kilometers of territory, so by that account we should only have had 12 [leopards].”

“The density of large cats is totally dependent on prey. The more prey you have, the more [predator] animals you have.”

Until city and forest officials find a way to collect garbage and cull the area's stray dogs, the hope for local residents and conservationists is that a greater density of leopards doesn't necessarily mean more leopard attacks. Athreya argues that leopard attacks spiked between 2000 and 2004 (including 84 attacks in two years alone) primarily because widespread panic forced forest officials to trap and relocate supposed problem animals — mostly by dropping them deeper into the park itself.

Instead of removing a threat, however, the relocations opened up a territorial vacuum for new leopards to move in. So attacks continued wherever a leopard was removed. Meanwhile, the relocated leopards grew more aggressive in targeting human habitations since they were thrown into ranges already occupied by hostile rivals. Or they just made their way back home, sometimes traversing hundreds of kilometers to get there.

“Everybody thinks trapping is the solution,” Athreya said. “But it actually worsens the problem.”

Since the forest department realized that relocation should only be used as a last resort — removing animals that have actually attacked people — the frequency of attacks has gone down dramatically. At the height of the relocation craze, between 2002 and 2004, there were some 84 leopard attacks in the area, an average of 28 a year. Between 2005 and 2010, the average number of attacks plunged to two per year.

But a dramatic increase in the human population has resulted in another spike in attacks — including seven fatal maulings in 2012 and several more this year. The number of people living inside the park has ballooned from a few hundred to at least 10,000 over the past five years, according to Jalpesh Mehta, whose non-profit Empower Foundation works with these communities. And with every attack, the forest department faces more pressure from local residents and the politicians who represent them to set traps and relocate animals.

Understandably, tempers run hot. On the night forest officials captured the leopard believed to have dragged away 50-year-old Swetha Paghe, angry villagers armed themselves with iron rods, knives and cleavers to try to prevent the wildlife rescue team from taking the animal away. Only with the help of police, and after a long negotiation, could forest officials and volunteers get the leopard out.

“People feel that we care more about the animals than we do about the people,” said Pawan S. Sharma, a volunteer who helped with the rescue. “Sometimes people say, 'You are waiting for something to happen, and only then you will act.'”