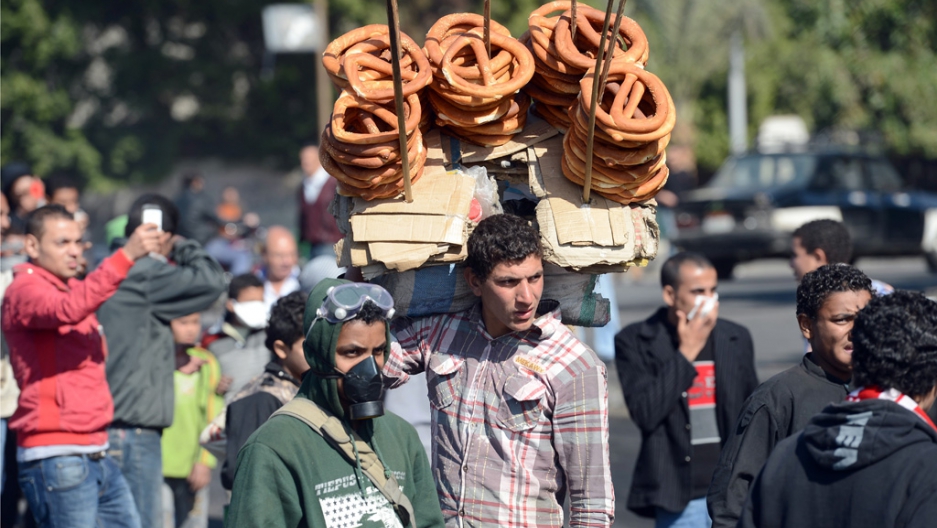 CAIRO, Egypt — Hundreds of Egyptian bakers blocked roads in Cairo on Tuesday in reaction to a government plan to ration bread.

They descended on the Supply Ministry to protest diesel shortages and rising fuel and flour prices, the Egypt Independent said.

Bakers are under increased pressure with rising costs and shortages while trying to survive under Egypt’s long-held policy of subsidizing bread and fuel prices.

The cheap bread is often the best and only food source for the nation’s poorest people. Now, the government wants to begin rationing those loaves, Reuters reported.

It’s a move to reduce the country’s deficit and will involve issuing electronic cards to control how much bread people can buy.

The plan will begin “after two months” in Port Said and Port Fouad, according to Reuters.

GlobalPost's senior correspondent in Egypt, Erin Cunningham, says that tampering with subsidized bread is "perhaps the most politically risky of measures" Egypt could use to address its budget deficit.

As recently as 2008, rumors that state subsidies on bread would be lifted prompted protests and clashes across the country, in which several Egyptians died.

Demonstrators that spearheaded Egypt’s revolution in 2011 adopted the slogan “bread, freedom and social justice!,” which has been a rallying cry at protests ever since.

Now, experts warn of another looming crisis, according to the Guardian. Bakers must sell bread for 5 piasters, or about 1 cent, and the government reimburses them; however, they say payments only cover two-thirds of the cost.

“Rationing might reduce subsidy expenditure, but it will come at the price of increased social tension,” economist Moustapha Bassiouny told the Guardian.

More from GlobalPost: Egypt might replace police with private security

According to the World Bank, food accounts for 44 percent of Egypt’s consumer price index, one of the highest in the world — and bread and other carbohydrates make up the bulk of daily consumption.

But under pressure from lending groups like the IMF to cut spending, the government needs to show that it is willing to scale back some of its massive subsidies bill, of which bread consumes some $2.45 billion each year.

Economists are critical of the way in which the subsidies are wasteful. Right now, there is no control over how many loaves one consumer can purchase, nor is there a database of customers.

But as Egypt’s politics become increasingly polarized, political violence is becoming the norm, and ordinary Egyptians struggle to get by. Even implementing slight restrictions on access to bread could prove explosive.

“We forgo other necessities and eat very basic things — bread, potatoes,” 50-year-old Mustafa Shehata, a Cairo resident, told GlobalPost in October. “I have to take on extra work, or borrow money from people in my neighborhood.”

Erin Cunningham contributed to this report from Cairo.