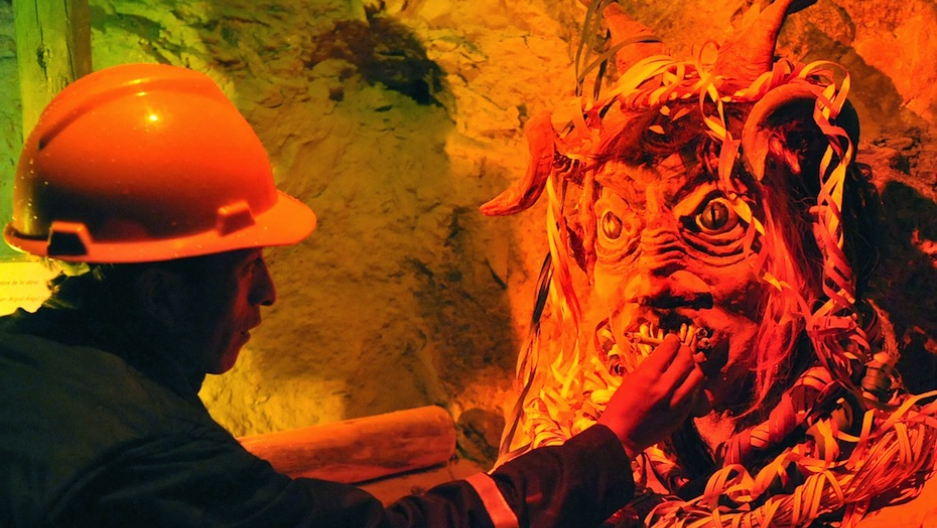 A miner places a cigarette in the mouth of a statue of "The Uncle" (Satan), which mine workers in Bolivia pay tribute to and ask to protect the minerals and their lives.
Credit: Aizar Raldes
Share

CERRO RICO DE POTOSI, Bolivia — “There isn’t a man on this mountain who wants his children to work here,” Pablo Choque says as he prepares for his shift as a driller.

Above us towers 15,800-foot Cerro Rico — literally the “Rich Mountain” — the greatest silver deposit ever known.

Locals have another name for it: The Mountain that Eats Men.

In its 17th century heyday, armies of indigenous and African slaves died here as the ore they mined helped keep the ailing Spanish empire afloat.

Four centuries later, thousands of men like Choque continue to risk life and limb deep in the bowels of Cerro Rico as they search for its last veins of silver, zinc and tin.

The miners rarely report accidents to the labor ministry, and there are no comprehensive official mortality statistics.

But the tales of death are everywhere.

According to Felipe Calizaya, a Bolivian professor of mining engineering at the University of Utah, there is little doubt that the mountain remains one of the most deadly places in the world to be a miner.

“The most basic safety procedures do not exist at Cerro Rico,” he told GlobalPost.

While many die from accidents, the greatest toll comes from silicosis, a lung disease caused by breathing in rock particles.

The clock begins to tick the day a miner first enters the mountain. The sickness kills most miners before they reach 40, Calizaya says.

The respiratory problems are compounded by temperatures above 90 degrees Farenheit deep inside the mountain, with the miners emerging, soaked in sweat, at the end of a shift into the cold mountain air.

Choque’s job as a driller is the most perilous. The risk of cave-ins, rocks falling, and drills suddenly bouncing backwards off a lode of harder rock are ever present.

But worst of all is the dust that causes silicosis. “You can’t see your hand,” Choque, 33, tells GlobalPost. “You have to wear a mask. Drilling for even one minute without one would be impossible, but you can hardly breathe with one.”

In a modern mine, that dust would largely be prevented by a continuous stream of water directed out of the drill tip.

Not here. Instead, it drifts back down the mine shaft, where in lower but no less deadly concentrations it is breathed in by other miners. Only the drillers wear masks.

Nor are there gas detectors, geological studies, mining engineers, or any attempt to coordinate the paths of shafts, many well over a mile long, which have left Cerro Rico resembling a sagging Swiss cheese, its summit already beginning to collapse.

Just about the only concessions to safety, both relatively recent, are the $10 helmets the miners wear and pipes periodically pumping fresh air along the main shafts – but not to the many tiny passageways that shoot off like tree branches, where the mining is actually done.

Women are not permitted here. The miners believe they bring bad luck.

In the deadly mine

We enter Cerro Rico through a narrow gash in the mountain’s side at an altitude of some 14,500 feet — equivalent to the summit of Mount Whitney, the highest peak in the contiguous United States.

As the last rays of daylight flicker out behind us, the thin, moist air gradually begins to warm and the ceiling slowly tapers down to the uneven floor, which is flooded to ankle-height.

After five minutes of steady descent, the narrow tunnel opens out into a chamber the size of a small bedroom, home to a shrine to Tio Jorge — “Uncle George” — the devilish deity who oversees this subterranean universe.

Julio, my guide, stops briefly to make an offering to the Uncle, a three-quarters sized clay mannequin sitting cross-legged on the floor.

First he sprinkles coca leaves in the figure’s lap, then he lights a cigarette and shoves it in his mouth. Finally he sprinkles some fortified wine in front of the statue.

We are treating George better than most of the miners.

A shelf above the Uncle’s head is lined with empty bottles of “puro,” rubbing alcohol. Being the cheapest way to get utterly plastered, puro is the tipple of choice among many of the miners here.

We resume our journey down the mine for what seems like an eternity of wading, clambering and crawling. The mud rises up our shins and the ceiling dips down to just three feet from the floor.

As we go, we run into several miners heading in the opposite direction. They are all business and greet us tersely, as though not a grim second underground — away from their lives and loved ones on the outside — should be wasted on anything other than the job at hand.

We pass under several logs that supposedly hold up the mine ceiling – but have buckled in two under the weight of the collapsing rock.

The mine appears to muffle sound, and the silence is only marred by the noise of dripping water and the occasional distant rumble of what seems worryingly like falling rock.

When we switch off our headlamps, the darkness is absolute and crushing.

About half-a-mile in, the air has moved from bracing to tepid to clammy, and is now visibly laden with fine silica dust — which barely raises a cough as you breathe it in.

Eventually we reach a fork in the tunnel, where several miners swig sodas as they ready sticks of dynamite to blow their way to a new lode.

As we chat, they point out a tiny hole in the tunnel side, barely wide enough for a man to squeeze through.

A steep, five-minute scramble up that narrow, diagonal chute — a shortcut to hell if ever there was one — lies another lode of silver.

Just a month earlier, the group tells me, two teenagers died from carbon monoxide poisoning there.

No one wishes to speak ill of the dead but it sounds as though the pair may have been attempting to steal other miners’ tools.

“That’s what youngsters are like,” says one old hand, a huge wad of coca leaves wedged in his cheek. “They think that if you can’t see it, there is no danger.”

Neither the labor ministry nor COMIBOL — the national mining agency that leases concessions to more than 30 mining cooperatives grouping together some 15,000 miners on Cerro Rico — even attempt to enforce health and safety laws, workers say.

When I ask several miners who is in charge of safety, they are baffled. “It’s up to each person,” one, Maximo Vilca, eventually volunteers. “It’s your life, so why would you rely on anyone else?”

The dangers are compounded by the cutthroat competition among the miners. When one cooperative finds a rich vein, neighboring cooperatives attempt to burrow their way to it as fast as possible.

Several miners tell me of fights deep inside the mountain, some involving dynamite. Others talk of miners digging upward to the collapsing summit of Cerro Rico, officially now off-limits because of the risk of cave-ins.

“On the surface, everyone behaves,” says one miner. “But down below, it is the Wild West.”

Life and death beyond the mine

For taking his life in his hands during every shift, Choque earns an average of 1,500 Bolivianos (around $220) a month, depending on how much silver he and his partners find.

He says he will stick the job out for another five years, until he has bought a home for his wife and three kids. “Time will tell,” he says when I ask him what he will do instead of mining.

The problem for him and the other 240,000 inhabitants of Potosi, the high altitude city just below Cerro Rico, is that the entire local economy is based on mining.

During the Spanish empire, Potosi was one of the richest cities in the world. It was said that a bridge could have been built with the silver from Cerro Rico all the way to Madrid.

But now Potosi, with its stunning colonial haciendas, churches and royal mint, is struggling. In 2010, the entire city went on a three-week strike, demanding new industries that would offer future generations an alternative to mining.

The government has made no promises.

In one run-down courtyard in the city, belonging to a miners’ mutual association, I come across that rarest species: an elderly ex-miner.

Juan Cuiza, 67, wheezes in barely audible Quechua as he tells me: “Of course, I knew about silicosis. But my family had to eat.”

Doctors have told him he has lost 60 percent of his lung capacity — that’s 60 percent gone in Potosi, at 13,000 feet above sea level.

Public hospitals are useless, he says, and he can’t afford private medicine. Instead, his wife treats him with honey and infusions from herbs she picks in the surrounding mountains.

“Do any job you want, but don’t go down the mine. It is too much suffering,” he says when I ask him what advice he would give to a young man considering working in Cerro Rico

On my last day in Potosi, over breakfast, a miner tells me of yet another death, just the day before my own trip down the mine.

Ricardo Manrique, 36, died after plummeting 120 foot after the rope he was using to ascend a shaft snapped. He left behind his wife, two sons and four daughters, the oldest of them just 11 years old.

“What pains me most is his children,” the miner told me wearily over his morning coffee.  “His sons are orphans now and will be heading down the mines sooner rather than later.”