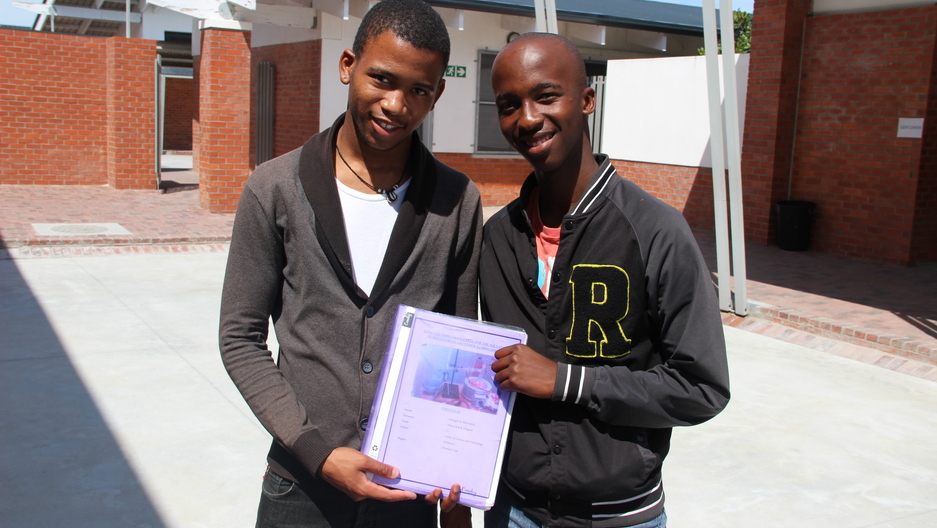 Abongile Xeketwana and Monwabisi Dingane with a summary of their chemistry experiment.

And they’re the first COSAT students to win this competition.

Their experiment, “Using Oil from Orange Peel for the Solvation of Polystyrene and Other Hydrocarbons,” was inspired by a desire to clean up the townships they live in. They isolated oil from orange peels and used it to convert plastics – like the kind that litter much of Khayelitsha – into a polymer that can be recycled or repurposed. The further details of their findings are a bit lost on me, but they clearly impressed the judges.

Yesterday, the duo boarded an airplane to Beijing, where they will represent South Africa in a global high school chemistry competition. I saw them just before they left, and they seemed remarkably calm – particularly for two kids who have never been out of the country.

They said they wrote to the Department of Education, asking the government to pay for their advisor, COSAT chemistry teacher Mr. Barnard, to accompany them on the trip. But they never heard back, so they’re traveling alone. (They said they’ll be well looked after once they arrive in China.)

I asked them to take lots of photos on their trip, and I’ll post some when they return. Along with, I hope, news of their world championship.