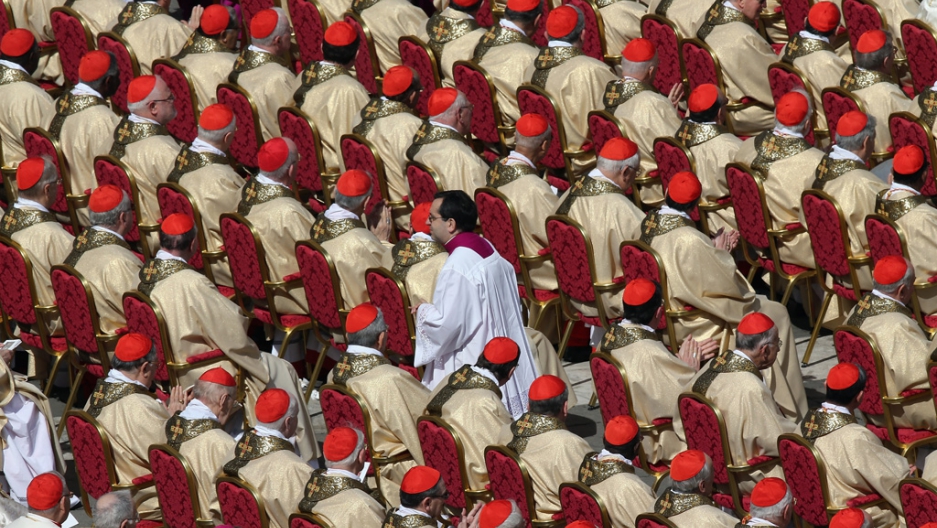 Cardinals attend the Inauguration Mass for Pope Francis in St Peter's Square on March 19, 2013 in Vatican City, Vatican. The inauguration of Pope Francis was held in front of an expected crowd of up to one million pilgrims and faithful who crowded into St Peter's Square and the surrounding streets to see the former Cardinal of Buenos Aires officially take up his position.
Credit: Dan Kitwood
Share

ROME — Under blue skies, Pope Francis at his investiture Mass today at St. Peter's Square called on international state officials there to be "protectors of one another and of the environment...We must not be afraid of goodness or even tenderness."

An estimated 200,000 people packed the square and streets surrounding the basilica.

The pope's sermon, amid the beauty and solemnity of a Latin Mass, spoke specifically to representatives of governments seated aside the altar, from US Vice President Joe Biden to Zimbabwe's President Robert Mugabe.

"I would ask to all of those who have positions of responsibility in economic, political and social life, and all men and women of goodwill,” he said. “Let us be 'protectors' of creation, protectors of God's plan inscribed in nature...keeping watch over our emotions, over our hearts."

Yet in the unfolding narrative of a pope calling on the world's Catholics to focus on the poor and marginalized, Francis was trailed again by news coverage from Argentina that put him in a negative light in his response to clergy sex abuse.

"During most of the 14 years that Bergoglio served as archbishop of Buenos Aires, rights advocates say, he did not take decisive action to protect children or act swiftly when molestation charges surfaced," wrote Nick Miroff in a piece published yesterday in the Washington Post, "nor did he extend apologies to the victims of abusive priests after their misconduct came to light."

Father Julio Cesar Grassi remains a priest despite being found guilty of child sexual abuse, according to the Post. "Church officials led by Bergoglio commissioned a lengthy private report arguing that Grassi was innocent," wrote Miroff, "submitted as part of the priest’s legal appeal, which is pending, and prosecutors say the document has helped Grassi avoid jail time so far."

Since the dawn of television, no pope has been immediately trailed by investigative reporting of his previous career as a cardinal and in Francis's case, as a Jesuit superior in Buenos Aires before becoming a bishop.

The contrasting story lines suggest that if he is to successfully focus Catholics on the plight of the poor and marginalized — a centerpiece of his agenda as Cardinal Jorge Mario Bergoglio — he must as Pope Francis forcefully confront the negligence of bishops and cardinals in handing pedophiles in recent decades.

On the ride into the square in an open vehicle, Francis stopped, stepped down next to the guardrail and embraced a young crippled man, held up by a male friend or relative. Lingering over him, kissing his forehead and blessing him, the pope's gesture captured by Vatican TV sent a powerful message of solidarity with the disabled and marginalized.

Yet even the power of imagery in a global culture linked by television can only buy time in such an uncommon situation.

Italian media have largely ignored the clergy abuse cases that continue to surface in Italy, a phenomenon that journalists and producers in other western countries have discussed among themselves in the last week. That Italian media denial is due, in part, to the heavy hand of Silvio Berlusconi, the disgraced former prime minister whose companies control 60 percent of Italy’s television industry. Berlusconi courted Vatican officials throughout his long tenure.

Italian society also has an embedded cynicism about the Catholic hierarchy as a worldly power, a view that casts priests abusing youth as no earthshaking reality.

But papal advisors and officials of the Roman Curia who use the Italian media as a baseline on world events are on borrowed time.

How deeply Pope Francis may be implicated in concealing a sexual predator may have greater impact on his papacy than the coverage of his role in the Dirty War, which compromised whole sectors of Argentine society, the church hierarchy included. In the continuing reports, his actions as a Jesuit superior suggest that he did what he could against great odds.

In words and gesture, Francis has taken swift steps to restore the image of the pope as a moral statesman on the global stage, a symbol of peace and preacher of moral responsibility for the world's poor.

How well he sustains that image seems likely to depend on his agility in dealing with the root problem — the lack of an adequate Vatican legal system.