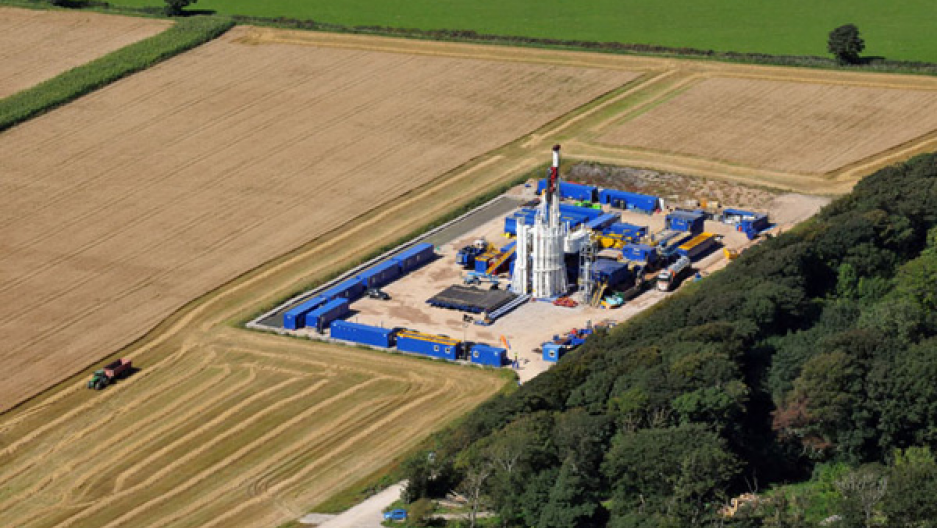 As the UK gears up to start natural gas fracking, government and industry say they're determined to avoid the mistakes made in the US. But observers differ as to whether the country is better prepared for the risks of the controversial technology, or worse.

When a natural gas drilling company says it doesn't have time to show you its fracking wells, you can bet local opponents will step up. And so it is with Lancashire residents Ian Roberts and Pam Foster, who one recent day took a reporter down a rugged country road near the British seaside town of Blackpool to have a look at one of the latest additions to the neighborhood.

This part of the UK is best known for farming and tourism. But it also sits on a lot of shale gas, and it's where a company called Cuadrilla Resources has drilled Britain's first exploratory wells using the controversial technology know as hydraulic fracturing or "fracking."

The method of pumping natural gas out of shale rock far underground has transformed energy markets in the US over the last decade while helping bring down both energy bills and carbon emissions. But it's also brought a host of environmental and health concerns.

Residents like Roberts and Foster have heard horror stories about pollution from fracking in the US. Some of the reports are verified, some are not, but Foster wants no part of the technology here.

"You've got to remember, horizontal fracking has never been undertaken in this country before," Foster says, standing in front of stacks of shipping containers and a blue metal tank that rise above the surrounding fields at Cuadrilla's test drilling site. "We're not prepared to be the guinea pigs."

The test well here in Lancashire is part of a rush to bring fracking technology to the world beyond the US. Opponents here and elsewhere worry that rush will also bring the same problems.

But supporters, like Cuadrilla's CEO Francis Egan, say it doesn't have to be that way.

"What I keep saying to people is, look it doesn't have to follow exactly every step of what happened in the US," Egan says.

UK gas regulations "up there with the best in the world"

Egan says he's also heard horror stories about fracking, but he believes the UK and Europe can learn from a decade of American trial and error.

"And it is recognized that the UK regulatory regime is if not the best, up there with the best in the world," Egan says.

The International Energy Agency would seem to agree. It says British and European practices are generally far stricter than those in the US. And Paul Younger, an engineer at the University of Glasgow, says the industry's record in the US has given fracking a reputation it doesn't deserve.

"It's been very unfortunate for us in Europe," Younger says, "because the way things have gone in the States has been to the discredit of the industry as a whole, sadly."

Younger says the UK owes its more rigorous oversight to decades of experience with its offshore oil and gas industry.

Take the way wells are constructed. According to a study conducted last year by the UK's Royal Society, which Younger contributed to, standard practice in the US is to line wells with two layers of concrete and steel casings. But the report says in the UK, companies use at least three layers of casings, to better guard against leaks.

Then, there's the water. A typical frack well can produce large amounts of contaminated wastewater. In the US, much of that is stored in large open pits, a practice younger shakes his head at.

"You know the idea of just digging a pond and sloshing the water in there and hoping for the best, there's no way in the UK," Younger says.

He says drillers in the UK will be required to use double-lined steel tanks, and unlike in parts of the US, they'll have to fully treat wastewater before it's disposed of.

Then there's the most controversial aspects of fracking–the chemicals mixed in that water. In the US, drillers can keep many of these chemicals secret. Not here, says Younger.

"There's no secrecy allowed whatsoever," he says. "And they will simply not allow anything that would not be permissible in drinking water."

For the time being, Cuadrilla, says it only plans to use one chemical in its test wells–a friction reducing substance called polyacrylamide.

Taken together, Younger says, these stricter practices will ensure that the kind of "reckless" mistakes made in the US won't be repeated in the UK.

But not everyone is convinced.

"When you actually dig a little bit beneath the surface, you start to realize that, actually, it's not regulated at all," says Mike Hill, a former oil and gas engineer who's been an advisor on fracking for the Lancashire government.

Hill says the UK's regulatory approach was designed for remote, offshore rigs in the North Sea, not for fracking wells near crowded towns and cities.

"And when you move large-scale gas production (or) exploration to within a few hundred meters of large urban conurbations, you need to take into account public health," Hill says. "And we don't have regulations for doing that.

"In fact," Hill says, "I think at this stage, we are considerably less protected than (people) are now in the States."

And when it comes to compliance, Hill says UK regulators depend too much on what a company says it does.

"There's no actual inspections at all," he says.

The UK's Health and Safety Executive says it did inspect two of Cuadrilla's test wells two years ago, but that the visit was mostly to check worker safety. To assess well integrity, the regulator says it relies on a "dialogue" with the company.

But even British lawmakers aren't sure if that's good enough. Tim Yeo, who chairs the parliament's committee on energy and climate change, says he doesn't know if the existing Cuadrilla operations are being inspected sufficiently frequently.

"And as you mention it," Yeo says, "I will ask some questions and investigate that."

The British government has warned Cuadrilla over failure to report damage to one of its wells. And just last week the company announced it was suspending work at one well site to complete an environmental impact assessment.

Looking for a cheap-energy boom

But the government is still eager to develop a shale gas industry to help replace the country's dwindling supply of gas from the North Sea. And Yeo says specific new regulations will be put in place to ensure that fracking is safe.

On the streets of Lancashire, some residents say they support fracking, as long as it is done carefully.

While opponents foresee an environmental nightmare, others hope a shale gas revolution will help revive the UK's sluggish economy.

"We are sort of desperate for energy," says Lancashire resident Ronald John Gower.

"As long as we get things a little bit cheaper, like in America," Gower says. "They're getting gas there a lot cheaper and it's helped their economy, hasn't it?"

The question is, can you have both low gas prices and tougher regulations? One new report suggests not–that partly because of environmental concerns, the UK won't see a flood of cheap shale gas.