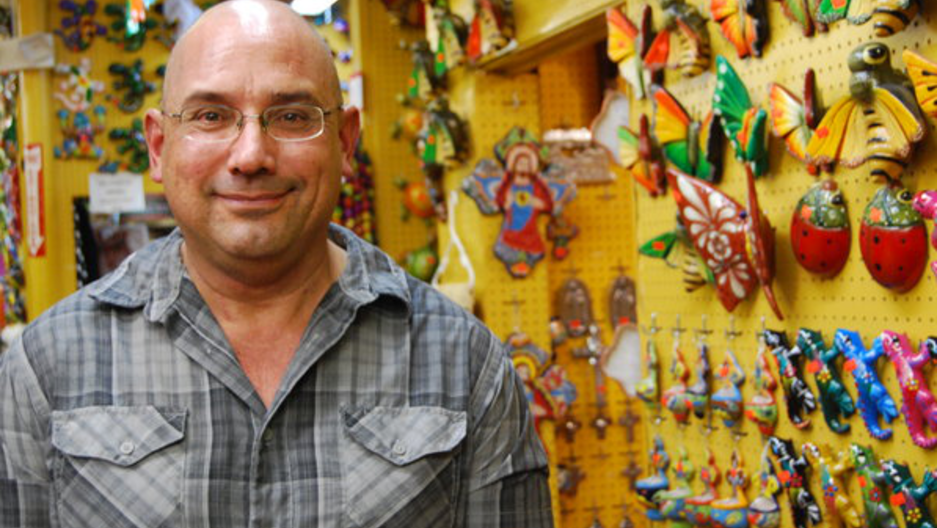 Raymond Camina says people who shop at his Laredo shop, Basket & Pottery Alley, often think they're shopping in Mexico, because of an internal U.S. border checkpoint. (Photo by Jason Margolis.)

The city of Laredo, Texas has a bit of a branding problem.

This sounds crazy, but this has happened to Camina more than a few times.

“At first we used laugh about it, but then it got more prevalent," he said. "Over and over, like, wow, there is a big confusion.”

Camina thinks people get confused because there’s a U.S. security checkpoint 29 miles north of this border city. These interior checkpoints are second lines of defense used by the Department of Homeland Security to thwart illegal immigration and drug smuggling.

Camina said he understands the need for heightened security, but they're making shoppers afraid to come to Laredo. And Washington’s calls for more security aren’t helping.

“I think it’s a little over exaggerated. But I don’t have the intelligence they have. But what I see, just from a business point of view, it makes it seem like we’re being invaded,” he said.

Many people along the border back up this claim.

“What we hear a lot are the helicopters, the helicopters all night, overhead and then they stop,” said Sandra Rocha Taylor, excecutive director of Laredo Main Street, an organization dedicated to revitalizing downtown Laredo.

Michael Seifert, a community activist who coordinates the Rio Grande Valley Equal Voice Network from the town of Alamo, says it's unnerving.

“I live one mile from the border, and I have border patrol cars racing down my street all the time, to what end I don’t know,” he said. “We have kids who play kickball in the street, so it’s kind of like, what’s that about?”

People along this stretch of the border shake their head at the idea of more border security. Homemade signs along the Rio Grande River read simply: “No Border Wall.”

Some say that money spent on the border wall— which can cost as much as $21 million per mile — is misguided. Juanita Valdez-Cox, executive direction of the immigrant-rights organization LUPE in the Rio Grande Valley, says there are bigger needs.

This area is one of the poorest parts of the country, and Valdez-Cox said the money going toward security can be better allocated.

“We just don’t believe that they should continue to use the security issue as a problem so that they don’t have to deal with fixing the real issues of immigration reform," she said. "It’s just a cop-out in our opinion.”

Of course, people want to be safe and they support some security, she added, but enough is enough.

“Living here, I’ve never felt in danger," Valdez-Cox said. "We don’t feel that pressing urgency of the violence issue that they talk about in Washington.”

According to the crime statistics, this place is pretty safe.

Victor Rodriguez, the chief of police in the Rio Grande city of McAllen shows reports comparing major crime rates of nearby border towns versus big Texas cities like Dallas and Houston.

The bottom-line: You’re three to four times safer along this stretch of border. Of course, part of the credit has to go to the increased presence of federal agents who patrol here.

Still, Rodriguez is tired of so many peopling describe the border as some sort of a war zone.

That skewed perception also keeps Mexicans away, too. But that’s not because they’re afraid — it’s just harder to visit.

Taylor’s office in Laredo is just a few yards from the Rio Grande River. Outside her window, hundreds of people are lined up on a pedestrian bridge, waiting to enter the United States.

“The lines are tremendous. You can wait two, three, four hours, it just depends on what time of the day it is,” she said.

Maria Eugenia Calderón-Porter, who directs the Bi-National Center at Texas A&M International University in Laredo, says the federal government needs to spend more money to get the lines moving.

“I don’t think there can ever be too much security, but there’s too much time lost,” she said.

“You have people standing in line for hours in the sun, cars idling, trucks idling to cross at the World Trade Bridge, losing time and money," she said. "We have to be more reasonable. OK, if our list for allowing somebody to come in is a very long list, provide the manpower and the facilities to do it with.”

Of course, Washington’s focus on security isn’t just about protecting border towns. It’s about stopping illegal entry and keeping smuggled drugs out of places like Missouri, Georgia and Ohio.

That argument gets little sympathy along the border though.

“The other side of that, I would like to say to the senator from Ohio: You guys need to clean up your ship, putting in programs that help people with addiction problems," Seifert said. "I think that really needs to be looked at seriously. Because the flow is not going to stop, it’s too profitable. It’s way too much money.”

“It’s an unending story,” Seifert said. “Is the border secure? Well it is, or it’s not.”

Perhaps the better question is: How do you decide if the border is secure? And who ultimately will get to make that determination?