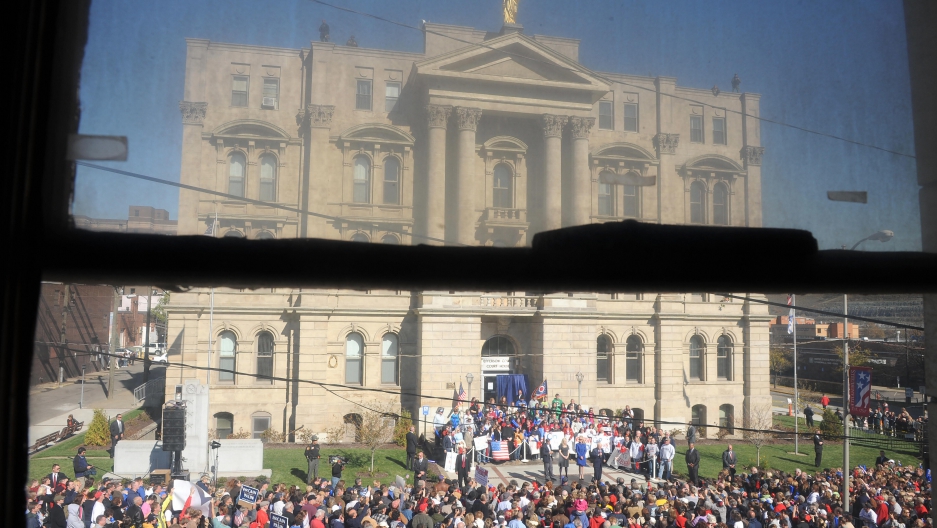 The judge at the town courthouse told the teenage girls they face a maximum penalty of six months detention if convicted.
Share

Two teenage girls wept in court Tuesday as they faced charges of making death threats on Twitter and Facebook to the Steubenville rape victim.

The court heard that one of the threats on Twitter read: "You ripped my family apart, you made my cousin cry, so when I see you bitch it’s going to be a homicide," the Daily Mail reported.

But outside court a brother of one of the girls claimed his sister was quoting lyrics by Philadelphia rapper Meek Mill in her tweet, the Post Gazette reported.

The 16-year-old is a relative of Ma'lik Richmond, the Post Gazette reported.

Judge Samuel Kerr remanded the pair in custody Tuesday, and told the defendants they face a maximum six months detention for their crimes.

The girls were arrested Monday and charged on three counts: Intimidation of a victim, Telecommunications Harassment and Aggravated Menacing.

Abdalla said one of the teenagers turned herself in to police while the other was arrested, WRTF reported.

The case was played out on social media when a video of boys laughing about the assault on the "dead" drunk girl went viral.

The football players broke down when they heard the judge's verdict: "delinquent beyond a reasonable doubt" on all counts.

Attorney Fran Carinci, who is representing the 15-year-old girl, described her client as a good law-abiding person.

She claimed the threats were not genuine and her client had been swept up in the hysteria of the case.

"I think, first of all, we need to calm down and reflect [about what] the kids really said and if it's a genuine threat," she said.

Following yesterday's hearing, the girls were led away and will face trial on March 27.