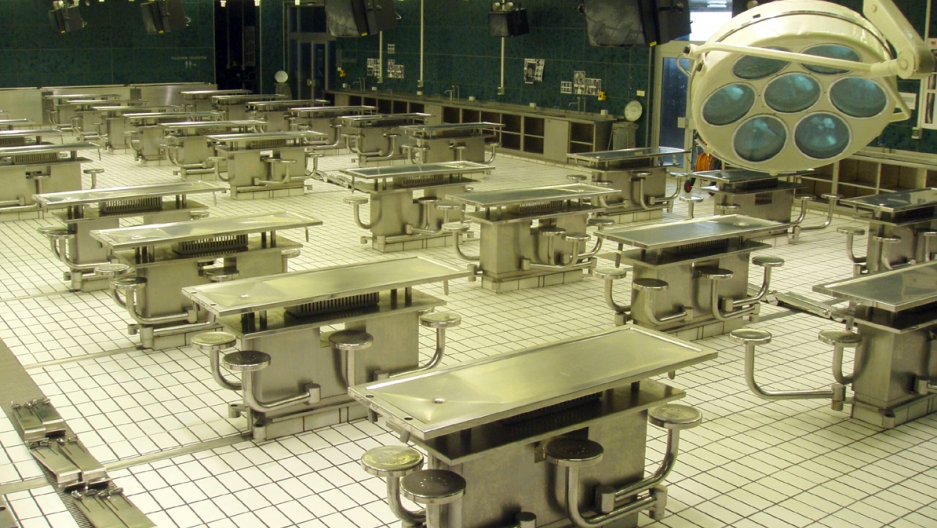 For medical students, nothing can replace practicing on cadavers that are as lifelike as possible.
Credit: Graz Institute of Anatomy
Share

GRAZ, Austria — A technician in white rubber boots and a light blue medical smock carefully washes an elderly female corpse on a metal table in the basement of Austria’s Institute of Anatomy.

Specialists here use a special preservation process called the "Thiel method," after its developer Walter Thiel, who headed the institute for 30 years until his retirement in 1990.

Developed over a period of decades, it’s based on a salting process similar to the one local butchers use to “wet cure” ham. It produces sterile, fungus-free cadavers that look and feel as close as possible to a living body.

Unlike traditional embalming, bodies preserved that way remain "floppy" and their tissues retain their living color and feel. The method also avoids the nasty smells and health threats from the chemicals traditionally used.

And although embalming has long been seen as a low-tech, largely non-commercial endeavor, Thiel’s process is drawing attention at home and abroad.

The renowned British forensic scientist Sue Black is setting up an institute to bring the method to Britain. Doctors in the United States and elsewhere are also interested.

The growing popularity may have something to do with a new trend in medicine. After a vogue for micro-medicine — such as the development of microscopic tissues for engineering artificial body parts — "macro-medicine" is making a comeback, and the Thiel method may play a role.

“If you go through a forest looking through a microscope, you will not see a tree," says Friedrich Anderhuber, Thiel’s longtime collaborator and current head of the anatomical institute. "If you feel a muscle or a liver of a cadaver, it must feel like a muscle or a liver.”

For surgeons developing complex techniques — say, for restoring bladder control after a hysterectomy — nothing can replace practicing on cadavers that are as lifelike as possible.

Surgeons and anatomists previously had to make do with grey, stiff bodies preserved with formaldehyde, or frozen ones that quickly disintegrate and pose infection risks after they thaw.

After his retirement in 1990, his successor Anderhuber added a post-graduate education center that attracts around 2,500 students a year from across the world.

In the embalming room, the bodies of two elderly men and one woman in their 60s or 70s lie on stainless-steel tables, heads propped up on sections of blue plastic tubing. They’re slightly swollen and mildly jaundiced from preserving fluid fed through rubber tubes into their necks and through their skulls.

The process requires around 5 gallons of preserving fluid each. Afterward, a red dye is introduced to give the bodies lifelike color.

In another room, two long rows of tanks filled with preserving fluid store around a dozen bodies on steel shelves.

The corpses are kept face-down because they float in the briny liquid and their faces would otherwise be squashed against the shelves above.

Bodies come from local donors — around 250 a year, although more want to donate to the institute than it can accept.

Like his predecessor Thiel, who died last year at age 92, Anderhuber says his body won’t be preserved or dissected when his time comes.

“It’s very important for us not to have had personal relations with the person we’re working on,” he explains. “We have great respect for the cadavers — we know they were mothers and fathers, but not our own."

Anderhuber says he may donate his skeleton for mounting as one of the institute’s exhibits instead.