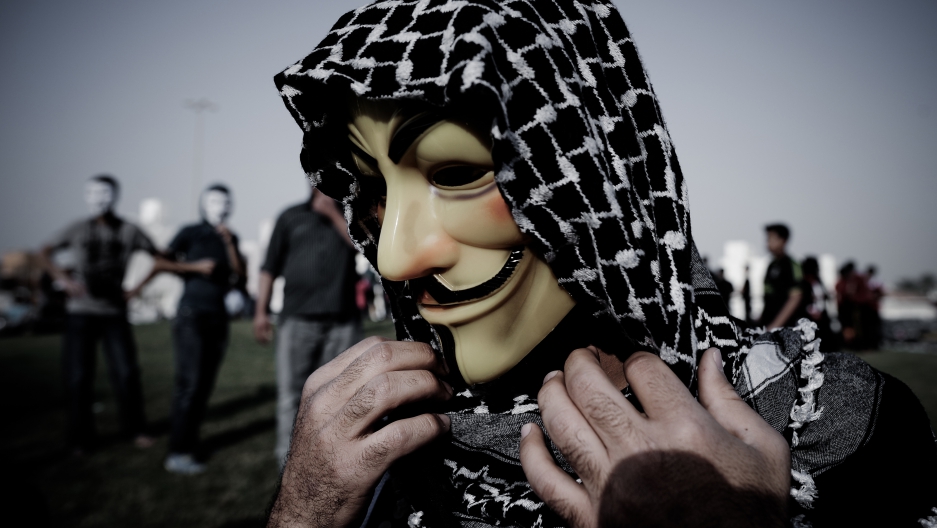 A Bahraini protester wearing a Guy Fawkes mask used by the Anonymous movement takes part in a demonstration against the government and in solidarity with jailed freelance photographer Ahmed Humaidan in the village of Karranah, west of Manama, on March 1, 2013. Humaidan was arrested during a rally on December 29, 2012 and was charged with 'demonstrating illegally' and 'using violence to assault police and damage public properties'.
Credit: Mohammed al-Shaikh
Share

MANAMA, Bahrain — Human rights activist Sayed Yousif al-Muhafdha had no idea who followed him on Twitter. That is, until he was arrested one afternoon.

As the acting head of the Bahrain Center for Human Rights, Yousif — as he’s known to friends — regularly witnesses demonstrations in Bahrain and documents actions by protesters and police.

Demonstrations are illegal here. The government has arrested Shia Muslim leaders. Thirteen have been sentenced to long jail terms for advocating democratic reform. Others had their citizenship revoked, making it almost impossible to find work.

Opposition TV and radio don’t exist. That leaves Twitter, the social network of choice for young Bahrainis. In November last year, Yousif had just tweeted a photo of an injured demonstrator when five men in plain clothes surrounded him. They refused to identify themselves and put him in an unmarked car. But Yousif said he knew he was under arrest.

After one minute, the officer told me, ‘You just tweeted. Give me your telephone.’ He took my iPhone. Luckily, I also have a Samsung.”

Yousif was later charged with “disseminating false news” under a law aimed at stifling dissent. Yousif ended up spending 30 days in jail.

“They kept me in jail for one month for a tweet, while police who have killed protestors go free,” he said.

Through a month in detention, assigned an immigrant roommate who spoke neither English nor Arabic, Yousif was left with plenty of time to think about how complicated Sunni-Shia relations have become since the start of his country’s Arab Spring uprising in February 2011. About 70 percent of Bahraini citizens are Shia. They face discrimination in jobs, housing and education.

“They are the poor people,” he said. “For sure they are the majority protesting in the streets.” But many Sunnis also opposed the government and joined the early demonstrations, he noted.

“Although the government tried to divide Sunni and Shia, the majority of all Bahrainis still have problems with the government. We all want democracy. For the past 42 years, we’ve had the same, unelected prime minister.”

Demanding an end to the monarchy has landed dissidents in jail for years. So far the government has dealt less harshly with Yousif. He was allowed weekly family visits. That’s how he learned that international media and human rights groups were protesting his detention.

“My family printed out all the articles and statements about my case by international organizations,” he said. “I knew I was not alone.”

“If Bahraini officials believe that an activist is inciting violence by tweeting a picture of an injured demonstrator, then it’s clear that all the human rights training sessions they’ve attended have been wasted,” Whitson said at a recent press conference in Manama.

Yousif said his detention was political, aimed at warning him and others to stay away from demonstrations. “They want me off the streets,” he said. “They want to commit crimes without any witnesses.”

A few days after his release from detention, Yousif was back on the streets documenting Bahraini police actions.

On March 11 he was acquitted of all charges.

Freelance journalist Reese Erlich’s reports from Bahrain are part of a GlobalPost Special Report on the role of the Sunni/Shia rift in Middle Eastern geopolitics, in partnership with NPR.