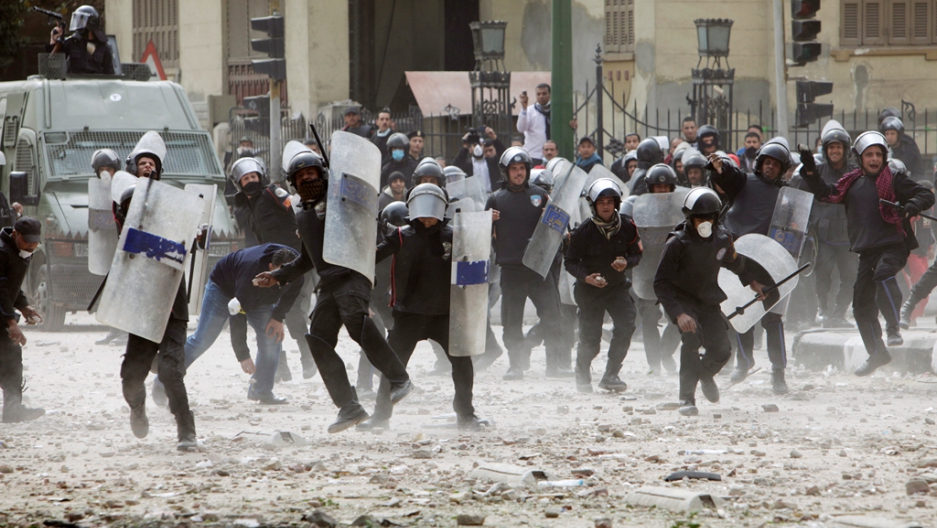 Egyptian riot police charge towards protesters near Egypt's Interior Ministry, as violent demonstrations continued into their second day on Feb. 3, 2012 in central Cairo, Egypt. As the country's turmoil continues and huge swaths of the police force strike to protest their working conditions, the government is exploring private security companies as possible replacements.
Credit: Ed Giles
Share

CAIRO, Egypt — It seems police here have finally had enough.

Earlier this month — following more than a month of clashes between security forces and protesters, in which at least two policemen died — riot police and regular officers started a near-nationwide strike to protest intolerable working conditions and what they say is their role as political pawns in the government’s fight with the opposition.

But the mutiny has also given rise to alarming calls by officials for “popular committees” — or militias — and private security companies to both legally and informally assume police duties to fill the vacuum.

Residents here are worried government-sanctioned vigilantism will pave the way for further chaos and a possible collapse of the state.

“If militias come out, this means that the state has collapsed,” said 55-year-old Ahmed Mohammed Mustafa, the owner of a fruit and vegetable stand near some of the most intense clashes in Cairo in recent weeks. “Nobody can stop them from coming into our neighborhoods and doing whatever they want. How are we supposed to know who they are?”

The unprecedented police strike — which has subsided temporarily in the capital but continues in other provinces — poses a serious challenge for the already teetering government of President Mohamed Morsi.

Morsi and the Muslim Brotherhood group he once led has sought to co-opt the largely anti-Islamist interior ministry during their time in power, deploying them to use the same methods as their dictatorial predecessor and abandoning calls for police reform.

But the moves have apparently backfired. Police conscripts admit they are ill-equipped to patrol the nation’s increasingly restive cities, given the rising anger, and that the country’s slide into chaos needs radical political prescriptions.

Now, the Brotherhood’s Freedom and Justice Party (FJP) is spearheading the drafting of a law that would allow private security companies to control the population, possibly as a bid to sideline an increasingly unfriendly police force.

And its Islamist allies in the southern province Assiut — the former militant group, Gama’a Islamiya — are forming motorcycle-riding committees that blare Quran verses to monitor security there.

“Most protests do not need a security solution, but a political solution, which we cannot provide,” said Farag Ahmed Farag, a riot policeman who helped organize strikes in Cairo. “We definitely provoke more anger on the streets. When we are there, the protesters become more violent. We just want to be able to confront thugs and criminals.”

In Garden City, an upscale Cairo quarter just south of Tahrir Square that hosts the US Embassy, residents and shopkeepers say their lives are plagued by insecurity, both political and criminal.

“There is no security here. There are thefts and fights break out,” said 27-year-old Hazem Al Azaz, a local grocer. The Qasr Al Nil police station, which early last week temporarily halted its strike, is just blocks from his shop.

“Since the revolution, the police have not done their job,” he said. “We cannot see a difference between when they are on strike and when they are working.”

But the prospect of private security contractors — which operate outside the command and control structure of the interior ministry — arriving to police the area deeply worries Al Azaz and his neighbors.

According to a senior Brotherhood leader in Alexandria, Ahmed Al Nahhas, the justice ministry would issue special permits to security companies to procure arms and make arrests.

Nahhas says citizens would be able to appeal to the public prosecution in the event of any abuses by security contractors.

But, he says, “I don’t really understand how it would work.”

That inspires little faith among rights groups, who add that both the justice ministry and attorney general have taken a more active role in helping cover up police abuses.

“[Justice Minister] Ahmed Mekki made it very clear to us: he is unabashedly pro-police, and he denies systematic torture and abuse” among security forces, said Karim Medhat Ennarah, security sector researcher at the Egyptian Initiative for Personal Rights.

As a result, rights groups say, it is unlikely prosecutors will adequately investigate mercenaries with an already ambiguous legal status.

“Nobody will accept militias on the streets — this is completely unacceptable,” said 20-year-old Ehab Qandil, who sells snacks and cigarettes in Garden City. “They will cause problems and the people will clash with them. They have no authority.”

Egyptians say they would much rather see a better-equipped and reformed police force return to the streets than have law-and-order fall into the hands of vigilantes.