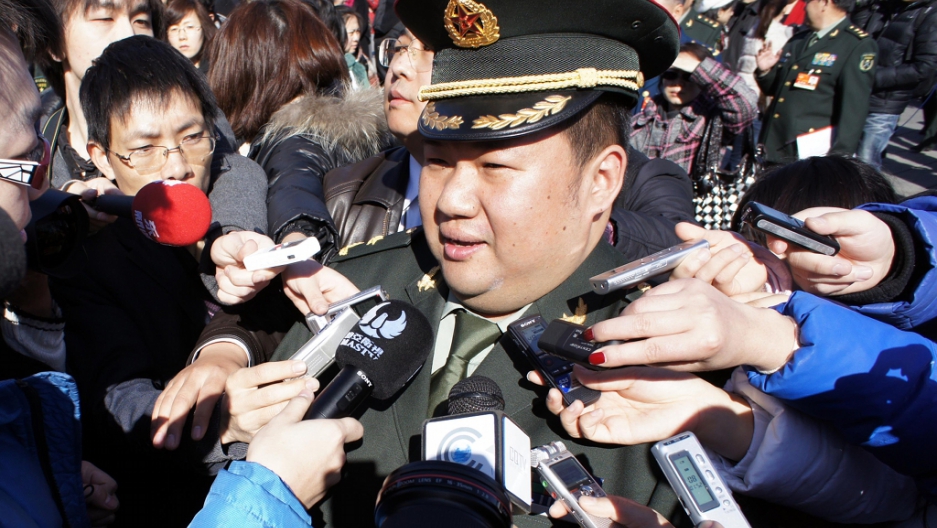 The delegate Mao Xinyu, grandson of Chairman Mao Zedong, is surrounded by reporters as he walks to the Great Hall of the People before the opening ceremony of the Chinese People's Political Consultative Conference on Mar. 3, 2011 in Beijing, China.
Credit: ChinaFotoPress
Share

The most-mocked man at China’s annual rubber-stamp congress—which is wrapping up this week in Beijing—was in some respects also its most privileged.

The only living grandson of the "Great Helmsman," Major General Mao Xinyu, 43, once again served as the butt of jokes about his girth, his intellect, and his career, which even he has admitted owes something to his name.

On Weibo, China’s Twitter, thousands shared a photo of the beefy man in his ill-fitting military uniform with this caption:

“My mom told me since I was little that a military uniform looks good on everyone. When she saw this picture, she finally admitted defeat.”

Mao’s attendance as a delegate to the China Consultative People’s Congress, an advisory body, is a regular bounty for Chinese media. Several years ago, he got so confused trying to dodge reporters that he lost track of his car.

At this year’s congress, he made headlines by calling for more “democratic rights and powers of oversight” for ordinary Chinese people, and submitting a proposal to apply Mao Zedong’s strategic ideas to cyberwarfare.

"Please take my proposal seriously," he said, according to state-run media. "I took much time in preparing it."

Yet while he is, for much of the public, a laughingstock, he is also an immense beneficiary of China's political system. In fact, his rapid rise epitomizes to many the worst excesses of nepotism in today’s Communist Party, where many of the top leaders—including president Xi Jinping—are “princelings,” the sons and daughters of first-generation Communist revolutionaries.

In 2010, without any obvious distinction, Mao was elevated to become the youngest Major General in the People’s Liberation Army. He is currently employed as the deputy head of war theory at the PLA academy of military sciences, where he researches “Mao Zedong Thought.” He has been given several degrees from prestigious universities despite—according to the Financial Times—having a learning disability.

In an interview with the popular Chinese portal Netease after his promotion, Mao admitted that his name was "definitely a factor" in his rapid rise. "All the people take their love and respect for Mao Zedong and transfer it onto my person," he said.

Indeed, while the Communist Party has veered radically away from his ideas, Mao Zedong still looms large in party ideology, and the "leftist" faction--which includes the now-fallen Bo Xilai--remains committed to many of Mao's socialist teachings. To this day, Mao’s portrait towers over Tiananmen Square, and the official verdict on him is that he was "70 percent right, 30 percent wrong."

Yet people have also not forgotten Mao's legacy as the dictator behind the Great Leap Forward and the Cultural Revolution, which together caused the deaths of up to 50 million people--far more Chinese than were killed by any foreign power--and plunged the country into a frenzy of violence which continues to haunt it to this day.

Even Mao Xinyu has at times seemed ambivalent about his grandfather's legacy. One off-the-cuff remark he made this week seemed to criticize Mao Zedong’s lingering cult of personality. The Telegraph quoted him saying Mao had been “put on an altar” and that only by “transforming [Mao and other leaders] back into real people” would the public want to learn from them again.

Little wonder then, that people delight in taking Mao Xinyu down a notch. And the fact that he has a knack for inadvertent comedy only helps.

In 2011, when invited to recite a Mao Zedong poem on a TV talkshow, the Major General gave a hearty reading, and then proceeded to pick his nose on the air.

Then when he called himself a calligraphy hobbyist, people found actual samples of his work and circulated it online. It was, to Chinese viewers, ridiculously sloppy and childish.

“If Chairman Mao saw these characters, he would faint from anger,” wrote one user in a translation by ChinaSmack.

Others have simply mocked his public speaking, wondering how anyone could attend his lectures at the university in Guangzhou.

"Thank God I don’t have any relatives studying in Guangzhou University, or else they would have to quit the school,” wrote one.

“Major general Mao Xinyu would teach you how to keep talking in the whole class while actually say nothing but nonsense,” wrote another.

Yet Mao Xinyu, for all his foibles, is of course different from his powerful, fiercely independent grandfather. Unlike Mao Zedong, Mao Xinyu has a more open attitude to the outside world. When he asked if he would be open to have his children studying in the West--as many elite Chinese children do--he said yes.

“If they study well, I don't mind sending them overseas," he said. "But they must depend on themselves. No privilege.”