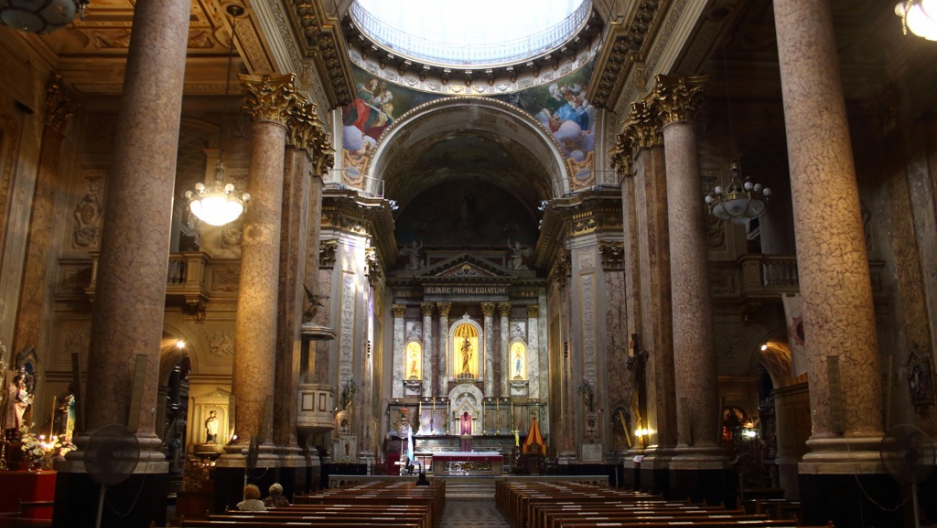 The inside of the Basilica San Jose, Flores.
Credit: Ed Stocker
Share

BUENOS AIRES, Argentina — Raquel Arias is beaming, not because the pope is Argentine but, more importantly, because he’s a fellow fan of San Lorenzo soccer team.

“Here, we’re fanatical about the game,” she says.

Standing opposite her in the grocery store, Nelida Varela is looking less than impressed. She’s a follower of Velez Sarsfield.

The pope’s trail in Buenos Aires has led to the slightly shabby middle-class neighborhood of Flores, in the center of the capital. Until recently, it was more renowned for its main plaza, street sellers and a notorious slum in its southern tip. Now, it promises to be known as the birthplace of Jorge Mario Bergoglio — Francis to the faithful — and Latin America’s first pope.

The mood here has been one of surprise. None of the country’s media outlets predicted he would be elected by the conclave. And although nearly 80 percent of the country's 40 million inhabitants claim to be Catholic, the reaction has lacked the spectacle it might have produced if the pontiff had been Brazilian, Chilean, or Peruvian. Football, it seems, is more of a draw.

Sixty-five-year-old Varela acknowledges she had “no idea the pope used to live around the corner” but said she was extremely proud nonetheless. The gossip instead focuses on Bergoglio’s San Lorenzo club membership card numbers that came up in La Quiniela, a popular lottery game, on the day he was elected. “Pure magic,” as she calls it.

Down at number 531 Membrillar street, neighbors are looking on bemusedly at the hordes that have descended. The pope was born at this house — although it has been pretty much completely rebuilt since he lived here half a century ago. Current occupant Arturo Blanco, 77, said the amount of people ringing his doorbell had been “absolutely crazy.”

Flores residents Sebastian Joaqin and Gonzalo Lahana, both 21, are eying the residence from the other side of the road. They explain that they attended the same school as God’s representative on earth, the Escuela Tecnica 27 Hipolito Yrigoyen, but had no idea until now that his former home was here.

“We came down to check it out,” says Sebastian. “It was shocking to learn that the pope is from the same neighborhood as us. We now have Messi, the Queen of Holland [Maxima Zorreguieta] and the pope!” Barcelona’s Argentine soccer superstar Leonel Messi, of course, had to be mentioned first.

Trinidad Cargozo, 65, points to number 555 where the pope’s apparent former girlfriend, known only as Amalia, lives. “They say that when he was young he said to her that if she wouldn’t marry him, he’d enter the church instead,” she says.

The pope, while not provoking undying devotion, certainly brings out positive feelings in "porteños" — as Buenos Aires residents are called — tapping into Argentinians’ sense of pride.

In the fruit and vegetable shop, Varela had referred to the Jesuit pope, whose parents are Italian, as “very intelligent, capable and humble,” mentioning he had shunned the normal golden papal cross in favor of his more austere iron one. His choice to ride back on a bus with the rest of the cardinals on election night and his plea to Argentine priests not to visit him in Italy further illustrated Varela’s point.

But with every high-profile job comes the dirt — and the papacy is no different. Just like Pope Benedict XVI, who couldn’t escape his Hitler Youth past, Francis has already had to deal with allegations that, as a member of the Jesuit hierarchy during the dictatorship in the 1970s, he turned a blind-eye to human rights abuses committed by the junta. One local journalist, Horacio Verbitsky, has accused the new pope of handing over two priests to authorities during the so-called "dirty war."

On Friday, the Vatican denied the accusations, saying, "They reveal anti-clerical left-wing elements that are used to attack the Church."

“Look, there are lots of people in this country who write things without substantiating them,” says Father Gabriel Marronetti, from the San Jose Basilica a couple of blocks away. He has known the pontiff for 21 years.

The church — with its impressive columns and frescoes — was where Bergoglio decided on his religious calling and a place he often used to return to when bishop, with the parish under his jurisdiction.

Pope Francis’ choice of March 19 as the date he will formally assume the papacy is also linked to this church. It’s the patron saint day of San Jose, or St. Joseph; among the inspirations for his path to the Vatican. The only drawback, Marronetti says with a chuckle, is that the pope won’t now be giving mass in Flores for the start of Easter later this month, as originally scheduled.

So does he think that Bergoglio will remain the plain-talking man from the barrio that he always was?

“He’s already shown that he’s not interested in protocol and that he wants to bring the church closer to the people,” the priest answers before pausing. “Hopefully he’ll stay that way.”