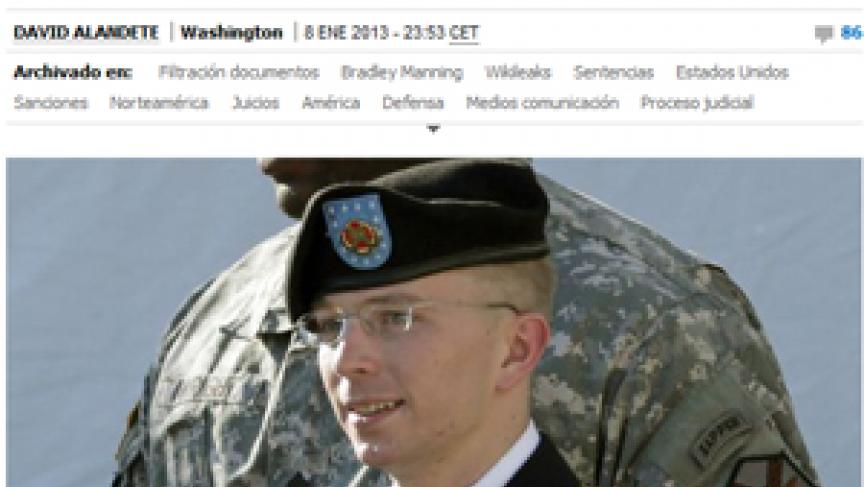 Share
I was part of the media swarm that descended on Fort Meade Maryland at the end of 2011, when Bradley Manning made his first appearance before a military judge. Since then, the media presence at the hearings has shrunk dramatically, but I noticed that the foreign press have been sticking around. In-between court sessions, I talked about it with Ed Pilkington, the chief Washington correspondent for The Guardian. "Yeah, it's interesting," he said, "I've been sitting as you have in this courthouse spillover room, and in there you've got people from Spain, Italy, France, quite a lot of American bloggers who are filing to their own little outlets, but the big American organizations have only turned up to hear Bradley Manning himself speak. They haven't been here through the more sort of minutiae that we've been sitting through- which I think is important, it's important to tell the whole story and get the whole picture, not just the slightly more sensationalist moments." It's an open question why the US media have fallen off this story. But what's keeping the foreign reporters here? For Ed Pilkington and the Guardian, part of it is personal. "Because we, of course, were involved in publishing the Wikileaks material right at the beginning, and so there's a slight feeling at the Guardian that, having been so engaged with it, we can't then abandon the person from whom the information… came in the first place." The New York Times was also there at the beginning, publishing the Wikileaks material along with the Guardian, but they don't send a reporter to all the hearings. It's been a sore point with critics, but the Times' Washington Bureau chief said that "as with any other legal case, we won't cover every single proceeding". But what about the media that weren't there from the start? The foreign reporters I encountered were drawn to the story because the leaks pull back the curtain on the sausage factory that is US foreign policy. "I think people in the US don't actually think this is a really big deal," says David Alandete, US Correspondent for the Spanish newspaper, El Pais. "Meanwhile, from the outside, it's seen as a bigger deal because there was an interpretation, in the Wikileaks saga that those cables, especially those State Department cables were showing the State Department and American diplomacy in a way different than it's portrayed from the government. So I think from the outside it's more interesting than from the inside." Alandete says that on a human level, his readers want to know how the US government is treating the man responsible for the leaks; they tend to be more sympathetic to Manning than Americans in general. Camille El-Hassani with Al-Jazeera Television, says her audience is extremely interested in the documents that expose details from the US war on Terror. "For my audience, the information about the wars in Iraq and Afghanistan, about civilian casualties, extraordinary rendition, broader things about US foreign policy- These are things that the US hasn't properly answered for; in a lot of people's minds, they haven't given answers to those questions," she says. "Our audience felt there were some answers in those documents. And I don't know that the American public is quite looking at it that way." The American public may not want to look at it at all, which could explain the dwindling media presence at Ft Meade— while others in the world may still want to know more about the wars in Iraq and Afghanistan, rendition, black sites, and Guantanamo, these are topics many Americans might rather forget.