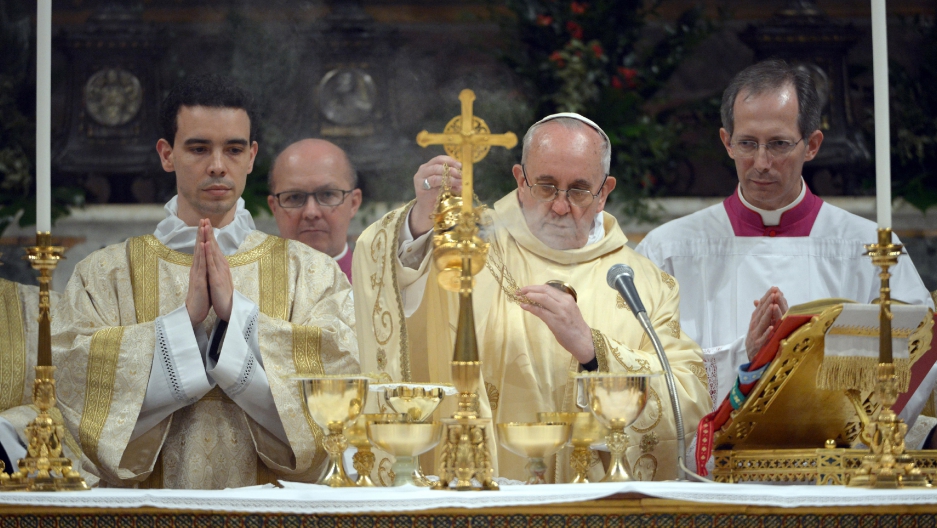 Jorge Mario Bergoglio attends his first Mass with cardinals as Pope Francis in the Sistine Chapel on March 14, 2013 in Vatican City, Vatican. A day after thousands gathered in St Peter's Square to watch the announcement of the first ever Latin American pontiff it has been announced that Pope Francis' inauguration mass will be held on March 19, 2013 in Vatican City.
Credit: Osservatore Romano
Share

ROME – This was an historic papal transition from the very start.

And as a week of pageantry and punditry comes to an end here, it is apparent that it is also the first time a papacy has begun right away as a story of competing narratives. Pope Francis is a pope from the New World but of Italian descent — a pope who speaks like a progressive on economic inequality but like a strict conservative on social issues, particularly gay marriage.

Pope Francis, in tone and gestures, introduced himself to the world as a humble pastor, bowing to 100,000 from the balcony at St. Peter’s Basilica and drew on his focus on behalf of the poor to turn the center of gravity in the Catholic Church from Rome to the global south.

Meanwhile a relentless media was digging into his complex position as Cardinal Jose Maria Bergoglio in Argentina’s bloody past.

Early reports began raising stark questions about his role as a Jesuit superior in dealing with the military junta during the 1970s’ Dirty War, a struggle in which 30,000 people, including more than 100 priests, were killed by the violence but the church as a whole was largely silent on speaking out against the injustices of the dictatorship.  Jesuits reacted with praise and surprise to the first of their order to become pope.

“He has truly lived his vow of poverty,” said Father Thomas Reese, a sociologist and author of Inside the Vatican, serving as a media commentator at the Holy See Press Office this week. “He was very progressive on social justice, fighting the Argentine government on benefits for the poor,” said Reese. “This is not a candidate of Wall Street. He’s to the left of Nancy Pelosi on economic issues.”

But the historic first  of a Jesuit becoming pope is another story, and not a simple one to parse in the case of Pope Francis.

"I am a bit shocked by the fact we have a Jesuit pope," Jesuit Father Federico Lombardi, the Vatican spokesman told reporters. "Usually the Jesuits don't accept, or at least try to resist being nominated as bishops or cardinals."

Ignatius Loyola, the Spanish soldier and mystic, founded the Society of Jesus in 1534 as an order in service to the pope, not to compete within the ecclesiastical ranks for positions like bishops and cardinals.

The Jesuits, as the society is known, are renowned as an order of educators, stressing critical thinking; but they have had a more ambivalent, sometimes strained relationship with certain popes. Clement XIV banned the Jesuits in 1773 as a casualty of the papacy’s role in European dynastic battles. Pius VII, who was imprisoned by Napoleon, revived the order after his release in 1814.

Yet a guarded period of waiting among Jesuits seems also at hand. How will a pope so strongly orthodox on moral teaching react to the liberal path of the Society of Jesus in America and other Western countries?

When Cardinal Bergoglio chose the name Francis, he won the hearts of Italians on the spot by embracing the saint from Assisi who immersed himself in the lives of the poor. Introducing himself with a bow to people of Rome as their bishop struck a tone of modesty, a pastoral essence.

Alternatively, bypassing the name Ignatius may also have been a coded message on his own religious order.

As Jesuits established universities and schools in Europe and the New World they became known as intellectuals of the church.

But since the reform-minded Second Vatican Council of the 1960s, Jesuits have taken a more direct path of engagement with the poor and on other social issues; many Jesuit universities send student volunteer groups to Third World countries.

The Jesuits’ embrace of liberation theology in 1968 so enflamed the powerful Mexican industrialist, Eugenio Garza of Monterrey, that he pressured the local bishop to dismiss Jesuits from Nuevo Leon diocese.

As Jesuits became more politically active, Father Robert Drinan, Dean of the Boston College Law School, won a seat in Congress in 1970, opposing US involvement in Vietnam. Wearing his clerical collar in Congress, he filed the first bill to impeach President Richard Nixon, though not for the Watergate scandal: Drinan charged that the secret bombing of Cambodia was unconstitutional.

But in 1980, John Paul II ordered all priests and nuns to withdraw as candidates or offices in electoral politics. Drinan complied.

In contrast, Bergoglio’s role as Argentina’s Jesuit provincial in the 1970s “insisted on a more traditional reading of Ignatian spirituality, mandating that Jesuits continue to staff parishes and act as chaplains rather than moving into ‘base communities’ and political activism,” John L. Allen Jr. wrote in a March 3 National Catholic Reporter profile of Cardinal Bergoglio.

The Christian base communities that mushroomed in the slums of many Latin American cities in the 1970s saw priests and nuns live among the poor, leading discussions of the gospels which stressed Jesus’s solidarity with people on the margins. Bergoglio took the role of Jesus as an ally of the poor to heart, but with absolute adherence to orthodoxy and obedience to church authority. He opposed liberation theology for what he saw as Marxist overtones.

Liberation theology denounced the politics of poverty on moral grounds and criticized the Catholic hierarchy’s historic alliance with Latin social elites. Cardinal Joseph Ratzinger ordered a public silence of the Franciscan priest-scholar, Leonardo Boff, a founder of the movement; he later left the priesthood.

But of the new pope, Boff told the New York Times: "I am encouraged by this choice, viewing it as a pledge for a church of simplicity and of ecological ideals. What is more, Cardinal Bergoglio comes from the developing world, outside the walls of Rome."

Jesuits are grouped together in geographic provinces. Each has a leader, called a provincial who oversees the broad management of the organization and the roles of individual priests.

In 1973, Bergoglio became master of novices at the Seminary of Villa Barilari in San Miguel, Argentina. Later that year, he was elected superior of the Jesuit province of Argentina.

“Liberation theology was a challenge to bishops to say more about the poor,” said a Jesuit scholar in Rome, speaking on background. “When Bergoglio was the director of novices, the community was so split that they brought in a new provincial from Colombia. It was very divisive.”

In 1980, he returned to San Miguel “as a teacher at the Jesuit school, a job rarely taken by a former provincial superior,” notes a Jesuit website, in suggesting a humility on Bergoglio’s part – or a comedown.

Many religious orders were wracked with divisions in Latin American countries struggling under the boot heel of dictatorships, particularly with clergy and sisters targeted by death squads. Argentina saw 30,000 deaths and disappearances by the time the war ended in 1983.

In 1992 when Bergoglio became an auxiliary bishop in Argentina, it marked a departure from Jesuit community life. By many accounts he lived a spartan daily life, cooking for himself in a small apartment rather than the archbishop’s palace, taking public transport even as a cardinal.

In 2005, shortly before the conclave in which he lost to Joseph Ratzinger, Cardinal Bergoglio was accused in a lawsuit in Argentina of being complicit in the military kidnapping of two radical priests he had dismissed, according to press reports in Argentina. A book by author Horacio Verbitsy, a respected Argentinian journalist and activist on human rights, documented that the two priests were taken by the military and tortured and later turned up, “drugged and partially undressed” at the edge of Buenos Aires.

A rival book by another journalist and a significant body of press reports in Argentina have dismissed the idea that Bergoglio played any role in this incident and simply reflected the difficult position the church found itself in while trying to protect priests who worked among the poor and were perceived as political leftists for doing so.

Reacting to the allegations that Bergoglio was somehow complicit in turning the two priests over to authorities, Father Reese said, “I don’t believe that. To say that he would do something like that – I just don’t buy it.”

The lawsuit was dismissed, but according to a report in yesterday’s New York Times, journalists in Argentina have unearthed documents “that appear to contradict Cardinal Bergoglio’s account of his actions,” including “statements by priests and lay workers who clashed with Cardinal Bergoglio.”

In 2010, Bergoglio testified that he met secretly with junta officials, asking for release of the kidnapped priests. In a long newspaper interview in Argentina he spoke of hiding people the military was hunting and trying to gain the release of others.

“He is unusual in that he has always rejected posts in the Roman Curia and only visited the Vatican when it was absolutely necessary,” Andrea Tornielli, an author and veteran Vatican correspondent wrote in La Stampa. “One thing he hates to see in the clergy is ‘spiritual worldliness’: ecclesiastical careerism disguised as clerical refinement.”

The irony of his position – as a cardinal living alone rather than community, a Jesuit eschewing a past position in the Vatican bureaucracy – suggests a true outsider, a man of radical convictions about the dignity of the poor yet an archbishop of ironclad adherence to moral teachings unchanged in centuries.

His most immediate task is to name a Secretary of State – the second-in-command position more like a combined chief of state and prime minister – and fire Roman Curia staffers named in a secret report to Benedict as culprits in the VatiLeaks scandal. A speech to priests in Buenos Aires last year suggests he is capable of that.

“In our ecclesiastical region there are priests who don't baptize the children of single mothers because they weren't conceived in the sanctity of marriage,” Bergoglio declared. “These are today's hypocrites. Those who clericalize the church. Those who separate the people of God from salvation. And this poor girl who, rather than returning the child to sender, had the courage to carry it into the world, must wander from parish to parish so that it's baptized!”

Such passionate convictions about the dignity of each soul undoubtedly inspired the cardinals who elected him. But the vault from  archbishop to Supreme Pontiff has made Francis a religious monarch. If the reports from Argentina establish serious culpability with the departed generals, he may have a harder time as a moral statesman on the global stage, and a champion for the world’s poor.