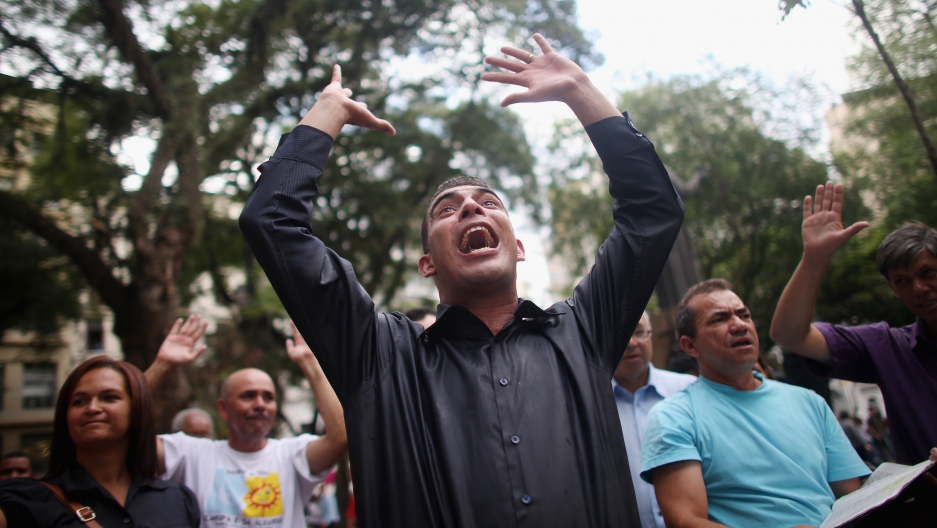 A Protestant (C) preaches to a crowd outside the cathedral of the Roman Catholic Archbishop of Sao Paulo, Cardinal Odilo Pedro Scherer, on March 11, 2013 in Sao Paulo, Brazil. Brazil has more Catholics than any other country in the world but a boom of evangelical Protestantism in Brazil is steadily eroding the dominance of the Catholic church in Brazil.
Credit: Mario Tama
Share

SAO PAOLO, Brazil — When Pope Francis makes his first scheduled overseas trip to the world’s most Catholic continent, he will be guaranteed an ecstatic welcome.

By happy coincidence, this year’s World Youth Day is being held in Rio de Janeiro in July and with papal attendance confirmed, Latin Americans will have an early chance to see the first pope who is one of their own. Around 40 percent of the world’s Catholics live in the region, with Brazil being the world’s most populous Catholic country – 64.6 percent of its 191 million citizens say they are faithful to Rome.

But if Francis wants to see firsthand the challenges the Vatican faces in the region, he should visit Rio’s notoriously violent slums. Here the youth are restless and evangelical church halls run by homegrown Protestant pastors appear on every second block, a pattern repeated on the poor periphery of most Brazilian cities.

As if following Europe, where the Catholic Church is besieged by secularism and apathy, most middle class Latin Catholics no longer pay attention to the church’s teachings on contraception and divorce while left-leaning governments increasingly legalize same-sex marriages and chip away and the region’s draconian anti-abortion laws. Many young Brazilians are turning away from the church and nearly 10 percent now say they follow no organized religion.

But in Latin America the greater threat to Rome is evangelical Protestantism, which is on many social issues often even further to the right.

Rio is the capital of a veritable Brazilian Reformation in this country that has seen Rome lose more souls in recent decades that it did during the European Reformation in the 16th century. Bible-thumping backstreet pastors compete with larger, well-organized neo-Pentecostal churches such as the Universal Church of the Kingdom of God, The World Church of the Power of God and New Life to attend to the spiritual needs of Brazil’s urban poor.

The rise of Brazil’s evangelical movement has hit the Catholic Church hard. For centuries it enjoyed a religious monopoly in the country. More traditional Protestant churches such as Baptists, Presbyterians and Congregationalists were confined to the margins of Brazilian society.

As recently as 1991, 83 percent of Brazilians defined themselves Catholic. By 2010 that percentage had fallen below 65 percent. In less than two decades Rome lost more than a fifth of its Brazilian faithful. If the rate of loss of the last two decades is maintained into the next two, by 2030 Catholics will be a minority in Brazil where already 22.2 percent of the population identifies as evangelical Protestant.

This change in Brazil’s religious profile reflects a deeper revolution in its society which entered the 20th century a rural, agricultural society and exited it urbanized, industrialized and increasingly in the grip of a rampant consumerism.

“The migration from the country to the city was very important for the growth of evangelical groups,” says Professor Orivaldo Pimental Lopes Jr., a sociologist who has studied the rise of Brazil’s new Protestant churches. “Traditional connections were broken.”

These migrants arrived by the millions in cities such as Rio and São Paulo where authorities were unprepared to receive them. Here migrants built the slums where traditional institutions did not reach, leaving many without such basic services as running water or a parish priest. It was into this gap that the evangelicals stepped.

“These communities were often precarious and violent but the city also offered the migrant new horizons and new freedoms,” says Professor Lopes. “People felt at liberty to make choices that they had not in more traditional rural communities.”

The emergence of a consumer culture among poorer Brazilians relocated to the city with its cash economy and aspirational lifestyles was fertile ground for the evangelical churches. “These groups preach the Doctrine of Prosperity, that God will reward you in this life and that if you are not getting ahead you are doing something wrong spiritually,” Lopes says.

This new emerging Brazil caught the Catholic Church, made complacent by its long religious monopoly, unaware. Even today the church here is plagued by a manpower shortage that means many parishes must share a priest with neighboring ones. And despite one of its cardinals having being tipped for the papacy, this lack of personnel means the Vatican has had to appoint foreigners to about a quarter of the country’s bishoprics.

“What the Catholic Church discovered was that despite the evangelizing work of its first missionaries the church had not put down deep roots,” says Father José Arnaldo Juliano dos Santos, a Catholic historian in Brazil. “And it was hard to compete with groups preaching reward in this life when you are promising it in the next one.”

The evangelical Protestant advance in Brazil mirrors a broader one across Latin America where in varying degrees evangelical churches are growing in strength from Argentina to Mexico and are already coming close to forming a majority in Guatemala.

This is the challenge that Pope Francis faces in his own continent. If the election of Cardinal Ratzinger as Pope Benedict was interpreted as an attempt to meet the challenge of increasing secularization in Europe, the elevation of Cardinal Bergoglio could be seen as a turn to a strong pastoral leader to face the evangelical challenge in what remains the world’s most Catholic region.

The church in Latin America has now learned lessons from the Protestant groups. It has in recent years sought to place greater emphasis on its own evangelizing efforts and leaders such as Cardinal Bergoglio and Odilo Scherer, the ‘papible’ cardinal of São Paulo, have redoubled the Latin church’s focus on its pastoral care as it seeks to rise to take on the evangelical challenge.

This has helped restore some confidence to the church.

“Before when Rome had a monopoly in Brazil many people said they were Catholics but they were in name only,” says church historian Father Juliano dos Santos. “Today though there might be fewer people calling themselves Catholics, I would estimate that in fact there are more practicing Catholics than before when the church enjoyed its monopoly.”

There is also suspicion that the explosive growth of Brazil’s evangelical groups might have been exaggerated. The religious data from the 1991 census was only released in 1997 amid concerns that the methodology overrepresented Catholics at the expense of evangelical Protestants.

“If this hypothesis is correct, and I believe it is, the very strong growth of evangelicals seen between 1991 and 2000 [70 percent] is overestimated. Their growth between 1991 and 2010 could in fact be flatter than it appears,” says the sociologist Lopes.

That would mean dire warnings of Rome being reduced to a minority church in Brazil by 2030 may be premature. That will provide some comfort when Pope Francis prepares for his trip to Rio in July.

But Brazil’s evangelical churches are now deeply embedded in the country’s culture. Huge temples modeled on Solomon’s in Jerusalem are being erected in Brazilian cities. One Pentecostal church already owns the country’s second biggest television broadcaster. In the Congress in Brasília, the so-called ‘evangelical caucus’ is courted by the ruling Workers’ Party, to the dismay of many of its activists.

Pope Francis will visit a Brazil where a homegrown Reformation is sinking ever-deeper roots.