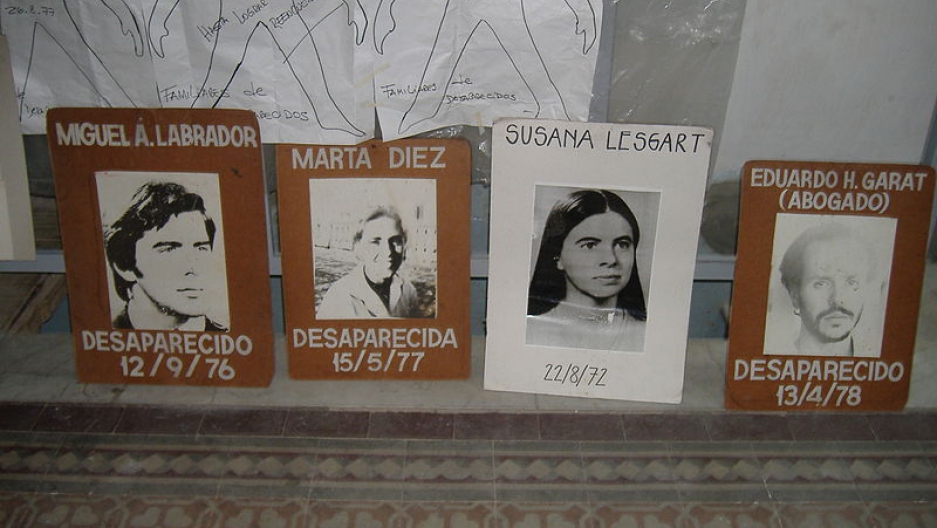 Some Argentinians disappeared during the Dirty War. (Photo by Pablo D. Flores via Wikimedia Commons.)

The new leader of the Catholic Church, the former Cardinal Jorge Mario Bergoglio of Argentina, is a precedent breaker in many ways.

Pope Francis is the Vatican's first Jesuit leader and the first pope from the Americas. But his selection has awakened old concerns about the role Argentina's Catholic Church. Some critics have alleged that Bergoglio may have been complicit in the military regime's human rights violations.

In 1976, a military junta seized control of the Argentinian government, and thousands of people disappeared. It became known as the Dirty War and ended in 1983.

Bergoglio was the top Jesuit in Argentina during the junta years. During that time, two of his priests disappeared and were subsequently tortured.

John Dinges, a journalism professor at Columbia University and author of "The Condor Years: How Pinochet and his Allie Brought Terrorism to Three Continents," says there are questions whether Bergoglio did anything to try and prevent this..

"He had actually dismissed them because they were too progressive.  They were then kidnapped and after a short period of time, they appeared disheveled, beat up, tortured, undressed on the street," he said.

But it's equally unknown if Bergoglio played a role in winning their release from their captors. There is no evidence Bergoglio passed a message to the military encouraging them to detain the two Jesuits who disappeared, Dinges said.

During a similar period of violence and unrest in neighboring Chile, the Catholic Church was a leader in the human rights movement, saving thousands of lives. But in Argentina, the church did nothing to protect the people from the military, Dinges said.

"The hierarchy of the church, which would include the head of the Jesuits — did not speak out in favor of human rights, did not speak out against the dictatorship," he said. "In fact, the only statements that they made were basically to congratulate the military on re-establishing order."

There are at least 10,000 documented cases of people who disappeared during the Dirty War.

Many of these victims were Catholics, but they weren't considered active Catholics, Dinges said. Other victims were members of revolutionary Marxist groups, described at the time as terrorists who carried out violent acts, he added.

"The affiliation with the church was between the right wing and the church in Argentina, the opposite in many other countries," he said. "But you didn't have a really strong liberation theology presence in Argentina, and certainly, the hierarchy was definitely against those progressives."

The Associated Press reports some leading Argentine human activists say Bergoglio shouldn't be included with other church figures that were "closely aligned with the dictatorship."

In the case of the abducted Jesuit priests, the best scenario for Bergoglio would be that he went to the military and actively intervened, saving their lives, Dinges said. Which is conceivable.

"The fact that they were not killed is certainly significant," he said. "Then of course, we need to find out what else he did on behalf of the thousands and thousands of people that were disappearing off the streets."