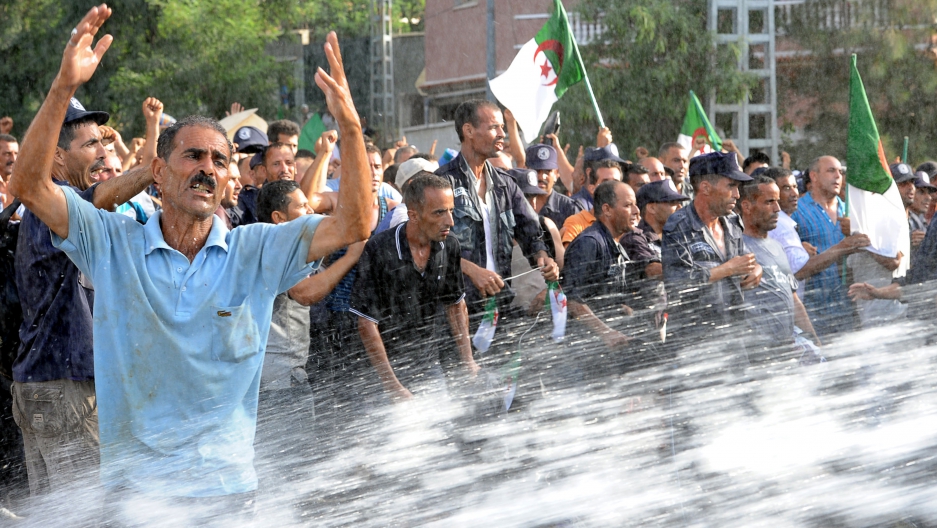 ALGIERS, Algeria — A towering pillar of black smoke rises menacingly above a cramped eastern suburb of the capital on an otherwise calm recent afternoon.

Residents of a nearby shantytown have blocked a multi-lane highway, burning tires to protest the death of two of their neighbors killed by speeding cars. A swift police response has shut down the entire area.

“Why are they burning the tires?” a 29-year-old worker named Ibrahim says by way of explanation. “To get their rights.”

Algerians were left out of the Arab uprisings that swept the region two years ago, abandoning their own popular protests after a series of government reforms calmed a population still reeling from the instability of a deadly civil war in the 1990s.

But near-daily demonstrations like this one, including labor strikes across the country, are highlighting a deep social malaise and resentment of what Algerians say is an increasingly corrupt government that deserves little trust.

“We need to change those who are on top — the people who are leading must go,” says Nordeen Baba Ismail, a 24-year-old law student at the University of Algiers. “We want houses and jobs, but they do what they want. Even with a diploma, you can’t get a job. You need connections.”

That’s a common refrain. Many say government officials caught in a recent series of high-level bribery scandals are more concerned with lining their pockets from the country’s vast oil wealth than with governing. Unemployment is high, particularly among Algeria’s youth, as is inflation. Infrastructure and social services are buckling as the population grows.

The unofficial rate of urban unemployment is currently estimated to be between 18 and 20 percent, while joblessness in the more impoverished interior reaches as high as 30 percent.

“There is corruption at all levels,” said Abdul Haq Lamiri, director of the Institute of International Management in Algiers. “We have a make-believe democracy. And as long as this system stays like this, the economy will reflect that.”

When Algerians took to the streets at the beginning of the Arab Spring in February 2011 to protest high food prices, the government acted promptly to quell the unrest. The administration raised salaries for public and private employees, boosted subsidies for basic goods and introduced new laws that allowed for greater media freedom and more open political participation.

As a result, the National Liberation Front (FLN) — the party of President Abdelaziz Bouteflika that has dominated politics for decades — still holds power despite the election of a new parliament last year.

“The Arab uprisings happened because they were fighting dictators,” said 58-year-old Murad, a resident of Algiers old city. “Algeria has a dictator.”

Although some criticize the reforms as cosmetic, however, they appear to have placated at least some of the political class.

“Algeria was under state of emergency and it was lifted,” said Somaya Ferghani, a female member of Algeria’s parliament. “We saw the results of the Arab Spring in Tunisia and Egypt — it was the beginning of terrorism, not democracy. In Algeria, we are on our way to becoming a modern country.”

Many Algerians are truly worried about the consequences of a potentially destabilizing popular uprising after the nearly decade-long civil war that killed some 200,000 people in the 1990s. It began after the army cancelled elections that were set to bring Islamists to power.

Algerians are wary about the recent rise of Islamist parties in Egypt and Tunisia.

But even in areas still rocked by Islamist militants, ¬including the northern Kabilye Mountains near Algiers — where the spiritual leader of Al Qaeda in the Islamic Maghreb is hiding — residents are increasingly venting displeasure with the government.

Ali, a 60-year-old retired engineer who declined to give his full name, says he can’t support his family of six on his pension of $160 a month. Some are forced to buy vegetables on credit from local vendors.

“My four sons don’t have work, and my salary disappears in just 10 days,” said another man also named Ali, a resident of the provincial capital of Boumerdes. “I want to buy sardines, but they’re too expensive. We eat potatoes, carrots and sometimes dried fruit. We’re living under stress every day.”

Whether or not the popular anger is enough to bring people onto the streets remains to be seen, however. There’s a split between those protesting for greater freedoms and those who want better wages, separate goals that have yet to be united.

And many Algerians still have faith in the system, or too little faith in revolt.

“Nobody wants to bring Syria to Algeria,” says independent union leader Lamina Maghraoui. “But the more we protest, the more repression we see. If the regime doesn’t change its attitude and the social suffering increases, there will be a reaction. It will be a revolt.”