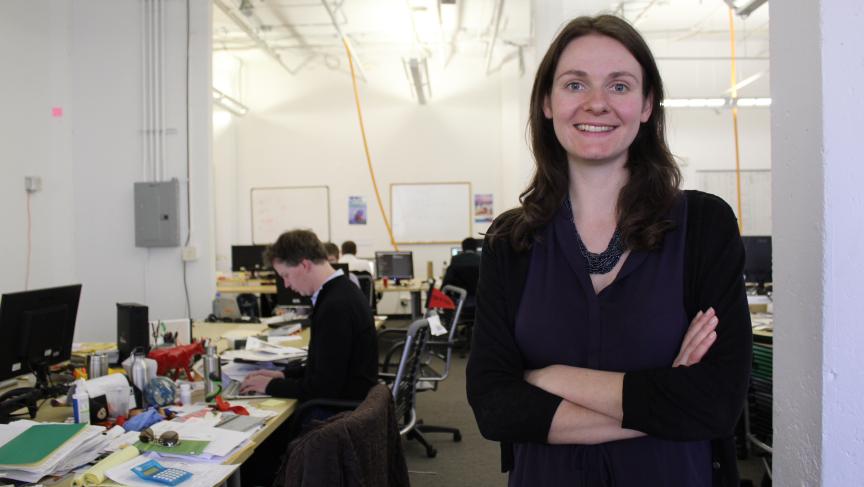 A cocktail shaker full of whiskey and juice marks the start of happy hour, but we aren't at a bar.

This is The Hatchery, a sprawling office space in San Francisco and an incubator for startups. It’s non-stop work here, so a weekly in-house cocktail hour is one perk.

Two entrepreneurs, James Richards, 25, and Michael Smith, 29, take a break. They met in Indonesia, where Richards is from, and now work on their startup called Advisable, an online marketplace for lawyers.

Richards is one of Columbia Law School’s youngest ever graduates. He passed the New York bar exam at age 20. Co-founder Michael Smith is a programming whiz from Belgium. But there’s a snag.

While Richards’ legal residency is taken care of, Smith’s visa isn’t certain and it could force him out of the country soon.

“It’s that period in between,” Smith worried. “It’s hard to tell what happens because we work best when we physically work in the same place and because of this visa issue we’re going to be in different parts of the world.”

Foreign-born entrepreneurs say the visa system here makes it extremely difficult for them to stay here. But the United States says it wants to encourage startups, so these entrepreneurs say it's time for a “startup” visa that would let them stay here and set up shop.

Smith and Richards know that a wobbly outlook in the startup world is not good.

“In a startup you have to be together,” Richards said. “There’s no way we’d be able to mimic this process remotely, especially in the early stages when every minute is a New York minute.”

Silicon Valley has long pressed for change, and this year could bring a fix. Support is growing for a new startup visa that would let foreign-born entrepreneurs work with fewer hurdles. Talks are on in Washington about safeguarding the visa against fraud and phony companies, and ensuring that it would go to startup founders that look solid and might create jobs.

“I think that the entrepreneur community is very much willing to put some hurdles around it so that this is not just a visa that you can pay a lot of money and get one,” said Emily Lam, with the Silicon Valley Leadership Group, who is helping lead the push for the startup visa.

Right now, there is bipartisan support for it. But the startup visa would likely get rolled into comprehensive immigration reform, and that path remains unclear.

“Even though the path is still littered with minefields, and at any point in time this whole immigration debate could get blown up by any number of issues, it is still the best opportunity to reform immigration in the last five or 10 years,” Lam said. “It’s going to be a fight to the death until at least August when we hope that before the recess, the bill gets passed.”

Opponents, including some immigrant rights groups, say it's not fair for entrepreneurs to jump ahead of others already in long visa lines. Others say more effort should be made to support U.S.-born innovators.

But advocates for the visa say it creates jobs for immigrants and Americans.

Michelle Zatlyn co-founded CloudFlare, which does programming to bulletproof websites from hackers. Its clients range from small e-commerce companies to political groups around the world.

Zatlyn ticks off some of the countries where politicians have employed her company’s services, including Colombia, Ecuador, Pakistan, Turkey and Israel.

“In the Middle East, where there is a lot of unrest, where sometimes the fighting that is happening on the ground, you’ll see the fighting go to cyberwars,” she said.

All told, Zatlyn has helped grow the company from 3 to 40 employees, hiring a mix of foreign and U.S.-born engineers. They have filed 25 patents.

But Zatlyn is from Canada. After driving out to California after earning a master’s in business from Harvard, she started to hit a visa wall.

“My first attempt was denied,” Zatlyn said. “At that point, I had three months left.”

First, Zatlyn’s company, like any startup, was judged too small, considered high-risk. Plus, as one of the company’s founders she couldn’t sponsor herself for the H-1B skilled-worker visa, one way foreigners try to get around this obstacle. To stay here, Zatlyn actually had to become an employee of the company she founded, demoted to product manager.

At the same time, she understands some of the reasoning behind the bureaucratic vetting process.

“It’s hard to discern who’s legitimate and who’s not,” Zatlyn said. “I mean, the immigration service is not in the business of picking businesses that are going to win.”

But there is worry that, for the first time, the number of immigrant-founded startups is declining because of the bureaucratic costs and uncertain wait. Startups can’t afford visa limbo. So they’re heading elsewhere, to countries that do more to roll out the red carpet for innovators.

“Chile, for instance, offers $40,000 per entrepreneur. They’ll actually give you money if you want to go there and start a business,” Lam said. “And Singapore has consistently said that they’ll offset salaries if, you know, want to start new jobs there.”

Yet, there is one workaround that might help keep foreign innovators in the United States, kind of. A company called Blueseed wants to create a floating startup community. It would be a vessel moored in international waters near California.