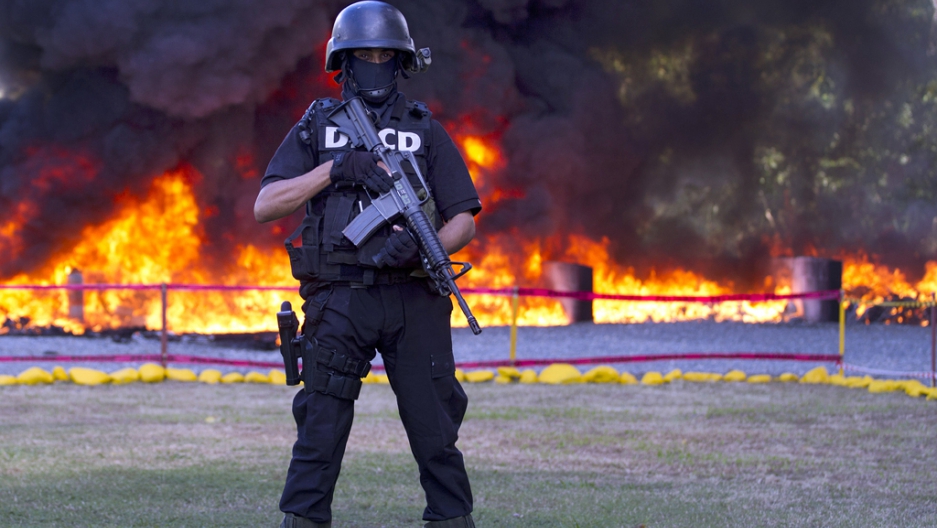 An agent of the the Dominican National Directorate for Drug Control (DNCD) stands guard as seized drugs are burned in the background in Pedro Brand, Dominican Republic, on Dec. 20, 2012. Some 3.2 tons of drugs — mainly cocaine, heroin and marijuana — were set ablaze, from 10 tons that were seized.
Credit: Erika Santelices
Share

BOSTON — At a time of growing frustration with the US government's hawkish and expensive drug strategy, Dr. Kevin A. Sabet remains an outspoken proponent of prohibition.

From 2009-2011, Sabet served as the senior advisor to Gil Kerlikowske, President Obama's director of the Office of National Drug Control Policy (ONDCP). He was one of three main authors of President Obama’s first drug control strategy. He also served as an ONDCP political appointee in both President Bill Clinton and George W. Bush's administrations.

Salon Magazine labeled him "the quarterback of the new anti-drug movement," and Rolling Stone called him one of legalization's biggest enemies.

The interview has been edited for clarity and length.

GlobalPost: At a time when many people — including heads of state — are calling for an end to the drug war, why is it important that we continue the fight.

Kevin Sabet: Well, I think it's important that we get specific about our policies and about our objectives. One phrase that I think has lost its relevance is 'the war on drugs.' Whenever I hear somebody talking about a war on drugs, I really ask first ' well what do we mean by the war on drugs?' I haven't heard anybody use it in the positive.

If you mean the status quo, I think it is time to analyze what has worked, what hasn’t worked, and what we need to do to get better results. Drug policy is not unique in that the trends attached to this issue are constantly evolving. That means you do need an evolving policy. The question is, what does that evolving policy look like, and is it better compared to what we have going on now?

A lot of folks use the term "alternative" to really hide behind things that are much more radical than they would even immediately let on. "Alternative" could mean increased treatment, which might be radical in one country, but it could also mean legalization, which I think would be radical in any country. I do think it’s time to look at drug policy. You can be against legalization but in favor of change, but unfortunately in today’s world that nuance has been completely lost.

Many people say that prohibition is failing: We’re spending upward of $40 billion a year and imprisoning hundreds of thousands of people — yet drugs are cheaper and more available than ever. Why is this?

The question is, failing compared to what? Actually drugs are not cheaper and more available than ever now. Drugs are also used by far fewer percentage of the population than they were just 30 or 40 years ago in the United States. [Editor's note: prior month usage among teens has fallen from greater than 30 percent from 1975 to 1980 to less than 25 percent today].

One of the biggest myths is we are simply incarcerating otherwise innocent people who are using drugs. There are about a million and a half people arrested for drugs every year. People need to understand that when somebody is arrested for a drug offense there are usually a lot of other things going on beyond the scope of drug addiction.

These kinds of things have to be tackled if we’re actually going to get any progress. You really have to look at this in the totality of the circumstances, for a lot of people drugs are a symptom of other things going on in their lives.

Studies find that there is very little difference in cannabis use between states where marijuana is criminalized vs. decriminalized. Is this evidence that a strict law enforcement approach is not working?

No, it’s evidence that the word decriminalization means nothing today.

The most robust studies done on states with formal decriminalization laws have basically shown that there is no distinction in terms of police activity, arrests, and jail. So the question is flawed. I really blame the discourse, which devolves into sound bites, talking points and bumper sticker slogans.

The word decriminalization has actually lost its meaning entirely because most journalists and advocates mistakenly substitute decriminalization with legalization. As I said, the decrim states don’t even have differences in their actual enforcement. The evidence is actually very mixed, and it doesn’t really tell us much.

Medical marijuana in California and Colorado is completely rampant with widespread use. That’s very different from medical marijuana that’s confined to 1,000 people in Maine or New Mexico.

According to studies the rate of marijuana use in the Netherlands, where possession of marijuana in small quantities is tolerated, is almost the same as in the US. What does this tell us about how liberal cannabis laws affect how many people use the drug?

It's completely and totally irrelevant. It’s much more interesting to look at countries that have rapidly changed their laws and see what the rate of use was in the past.

The reason I say that is because the US has always had higher rates of everything than Europe and these other countries. We drink more, we gamble more, we snort cocaine more, and yes we smoke marijuana more — always have maybe always will.

There were always far fewer users in the Netherlands than in the US in terms of kids. Now they’ve caught up to us. What else have they done? They’re completely reversing their policies, and they’re closing shops down.

The number one country in Europe for marijuana treatment need is the Netherlands. People want to use Portugal, and we could do a whole seminar on why Portugal is actually not a good example. Portugal in many ways is a treatment model similar to the US in many states: if a person is caught with drug possession only, they send you to treatment, and a panel looks into what is actually needed for you. We already do that in the states. Frankly in Portugal they’ve had mixed results with this, but it’s not legalization. It’s not even close to the things that are being promoted in the US in terms of drug law reform.

It seems that people who advocate prohibition mainly argue that it is working, and the bottom line is that fewer people are smoking marijuana. Is that the situation we're facing?

No doubt about it. It’s working compared to alcohol and tobacco users, definitely.

That doesn’t mean there aren’t areas that need to be refined and changed.

We do a horrible job at identifying who has a drug problem and what kind of intervention they need. We do a horrible job of getting people prepared to re-enter the community after they’ve served time for drugs or other crimes. We also can be mean-spirited in our laws among people that are trying to get their lives back on the right track.

Let’s be very specific here, I’m not being Pollyanna and saying that what we’re doing is perfect. What I’m saying is we need to a much better job of what we do, but compared to the model of legalization that’s being put forward what we’re doing is better. It is not the most desirable policy however.

So why should alcohol be legal even though it’s more toxic and kills some 40,000 people per year and marijuana illegal?

I’m not going to have an argument with anybody about what’s worse alcohol or marijuana, but in fact they’re usually used together. People who smoke marijuana usually also drink alcohol.

Alcohol has a long history of widespread, accepted use in our culture and widespread marijuana use does not have that. It makes absolutely no sense that we have an industry that preys upon the underserved and disadvantaged. [Alcohol marketers] ruthlessly target these populations to increase their bottom lines and their profits on the backs of people with addiction. It is totally unjust and it makes absolutely no sense that we would want to open that up again.

With legal marijuana we would open that up again. Alcohol and tobacco are precisely the reason we don’t want another legal substance, whether it’s marijuana, LSD, cocaine, or any and all of the above.

Has the US program to eradicate drugs overseas been effective in reducing US drug use?

It’s going to take far more than supply reduction, demand reduction or legalization to begin to address the problems of infrastructure and confidence in institutions.

In Colombia, the reason you can walk around in Cartagena today and not worry about getting your head blown off is that they had a robust plan which had as much to do with alternative development as it had to do with funding Apache helicopters and getting rid of coca production. You have to actually have a balanced strategy.

Of course Colombia is not Mexico, but it’s frankly so simplistic to paint a very wide brush and to think that anything resembling legalization would address those issues there.

Drug policy is hard, and it really does require at the end of the day an honest assessment of the pros and cons of any policy. I really don’t think we have that right now in our discussion of legalization in this country or in the world.

Do you foresee a time when there will not be a drug problem in the US?

We have more of a drug problem in many respects than we did 40 years ago in terms of prevalence and use.

In some respects we’ve had improvements and in others we’ve had setbacks. I see that continuing for the foreseeable future, but in terms of actually being able to reduce the levels and consequences of use that should be the goal of drug policy as much as possible.

Do I ever imagine a poverty-free or a cancer-free America? That’s pretty hard to imagine, but I sure want to strive toward that. I think it’s a good goal to have. Let’s reduce those things and the consequences they bring.