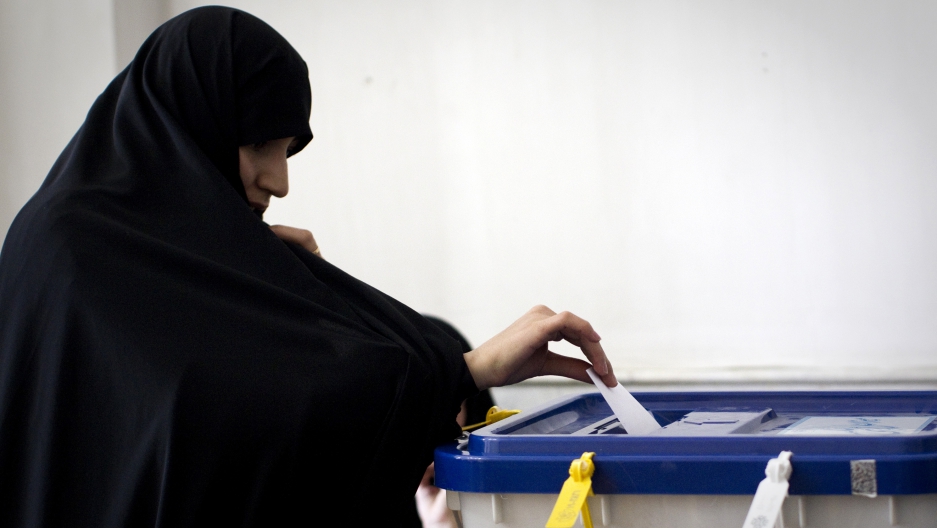 An Iranian woman casts her ballot at a polling station at Massoumeh shrine in the holy city of Qom, 130 kms south of Tehran, on Mar. 2, 2012.
Credit: BEHROUZ MEHRI
Share

A pro-reform clerical group in Iran is calling on the country's former moderate leaders to step up to the plate ahead of the country's June presidential election, according to Radio Zamaneh, an independent Iranian media organization.

The Society of Seminary Teachers and Researchers of Qom issued a statement saying in "view of the current national situation," former presidents Mohammad Khatami and Akbar Hashemi Rafsanjani should run for president. Qom is a major religious city and home to a leading Shiite seminary in Iran.

The statement was released on the Kaleme Website of reformist leader Mir Hossein Mousavi, himself a former presidential candidate now under house arrest, according to Eurasia Review, citing Zamaneh.

“People’s participation in the coming presidential election will be a worthy response to sanctions and warmongering as well as a large step toward peace, international cooperation and a presence on the global scene," Zamaneh cited the reformist group as saying.

Mostafa Tajzadeh, a leading intellectual among the reformists who is now in prison, has also called for them to run, according to Zamaneh.

Elected on a platform of reform, Khatami, a cleric, served as president from 1997-2005, during which time many of his campaign promises were stymied by the country's Islamic leadership.

Rafsanjani, a longtime powerplayer in Iran, has a colorful history of political involvement that is controversial among reformists. He was president of Iran from 1989 to 1997, according to BBC News.