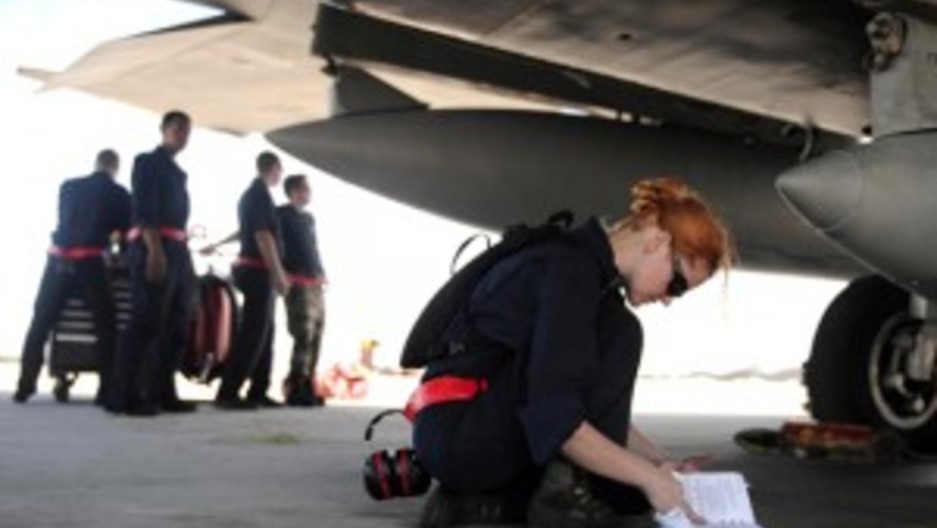 Jessica Hinves, Airman 1st Class, is now a member of the advocacy board of Protect Our Defenders. (Photo courtesy of Cinedigm/Docurama Films).

The U.S. Senate Armed Services Committee held a hearing Wednesday to examine the ongoing problem of sexual assaults in the military.

The hearing comes soon after a number of sexual assault reports at Lackland Air Force Base in Texas. On Monday, Defense Secretary Chuck Hagel said he would investigate the case of Lt. Col. James Wilkerson, in which Wilkerson's commanding officer reinstated the fighter pilot to active duty.

Under the defense department's uniform code of military justice, commanding officers can dismiss certain convictions from a solider, sailor or airman's record — including convictions for sexual assault

But the U.S. House of Representatives on Tuesday took up a bill that would remove that power from military officials. Similar legislation is expected in the Senate.

Jessica Hinves was an Air Force fighter jet mechanic when a fellow service member at Lackland Air Force Base raped her.

"I was in my barracks. I was walked to my room by a staff sergeant that night, who made sure I was OK. My rapist was in an adjoining room. He broke in through my bathroom and raped me, walked back out, grabbed his book bag, didn't say anything to anybody and left," she said.

Hinves went to the hospital, where a rape examination was performed. A woman in an adjoining room reported the assault, leading to an investigation.

"I joined the military knowing I could lose life or limb," Hinves said. "I never knew that I could be raped, especially by a soldier."

The investigation continued on for a year. Hinves says an officer with the Air Force's judge advocate general's office recommended an Article 32 hearing for her accuser — a hearing typically conducted during murder and rape cases.

But a few days before the court date, there was a change of command, Hinves said. The man's commander stopped the case from going further because he believed there wasn't a reason to prosecute.

The airman is still serving in the military; during the investigation he was awarded the Airman of the Quarter honor.

In the military judicial system, victims aren't guaranteed anonymity. And after she reported the case, Hinves says, everyone turned against her.

The military doesn’t have the ability to handle the complexity of these cases, Hinves said.

"I don't think it should be taken out of the military. I think we need somebody in there to work with the military," she said.

Susan Burke, a lawyer specializing in cases of military sexual assault, says withdrawing charges is common because the uniform code of military justice is set up to make reporting a crime intrusive for victims.

"In civilian life, if you're a crime victim you go to the police — you report and you confront an impartial system of justice that doesn't in any way impact your career or your workplace. In the military, it's quite the opposite — everything is flowing through the workplace. It's a broken system that needs to be changed by an act of Congress," she said.

Past proposals for reform, including the Sexual Assault Training Oversight and Prevention Act, have been caught up in how the new rules would be applied, Burke said.

"Any piece of legislation that comes forward has got to grapple with taking that convening authority out of the mix, because that's the piece that's making it so unfair," she said.

Rapists don't have one victim, they repeat offend, Hinves said. And it doesn’t matter if they're attacking a man or a woman because they are just looking for an opportunity to offend, she added.