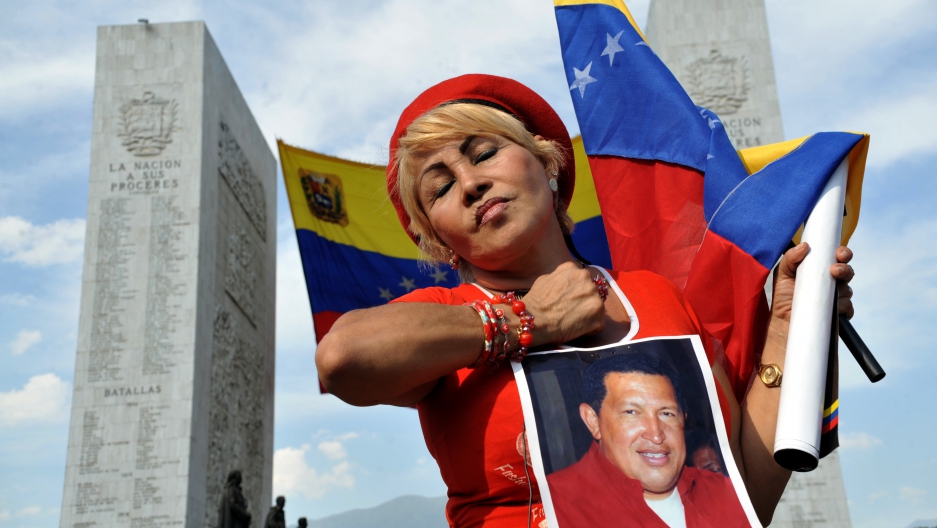 CARACAS, Venezuela — It can take half a day or more to get just a few seconds with the Comandante.

Following the death of President Hugo Chavez from cancer last week, the government declared seven days of mourning, which ended Tuesday. However, epic lines continue to form outside the military chapel where Chavez’s body will lie in state until midnight on Thursday.

“I've been crying for Chavez for three days,” said Maria Teresa Soto, a retired school teacher, as she got in line for a second attempt. “I was here from Thursday to Friday [of last week] and I couldn’t see him. It was impossible. I was awake for 27 hours. I got sunburned. But today, I am going to see him.”

Over the past 14 years, Chavez led a self-styled socialist revolution on behalf of the poor. He presented himself as the savior of Venezuela and a cult of personality built up around the figure of Chavez. That helps explain the crush of people clamoring to reach his coffin.

Even a week later, the line is about 2 miles long. Chavistas, nearly all of them wearing red, the color of the revolution, stand under the tropical sun or under floodlights after dark.

It calls to mind the over-the-top adulation for figures like Eva Peron, the wife of Argentine strongman Juan Peron who became a hero to that country’s poor and working class. After she died in 1952, the government put on a massive funeral and built a new Buenos Aires suburb — called Ciudad Evita — with a layout shaped like her head.

The frenzy is summed up in the words to “Oh, What a Circus,” from the opera "Evita":

“We’ve all gone crazy,
Mourning all day and mourning all night
Falling over ourselves to get all of the misery right.”

Unlike much in chaotic Caracas, a traffic-choked city of 5 million, the Chavez visitation is tightly organized. They’ve gotten the misery right.

Perhaps due to a temporary dry law, nearly everyone behaves. Many people sit on portable stools. Soldiers pass out free oranges and water. And the mood in the line is for the most part upbeat because, even though Chavez is gone, he seems to be everywhere.

The line is hard to figure. For long periods it’s static. Then suddenly everyone rushes forward like when the doors open for festival seating at a stadium rock concert. A few people try to cut in line but, when they’re spotted, a roar goes up from the crowd and soldiers force the interlopers to the back.

Many in line are out-of-towners. One, Kildare Cols, who works as a dentist in one of the free clinics that Chavez installed in the country’s poor barrios, lives in the western city of Merida. He spent 14 hours on a bus getting here. Cols says Chavez gave so much to the country that he’s willing to sacrifice a few days to honor his memory.

But there’s also a large dose of politics at play.

Like many of the mourners, Cols was excused from his job to travel to Caracas aboard a government bus. The bus first dropped the passengers off at a campaign rally for interim leader Nicolas Maduro, Chavez’s hand-picked successor who is running in the April 14 presidential election.

Opposition candidate Henrique Capriles, who lost to Chavez in October, when the badly ailing president was still claiming he was cancer-free, says the manipulation of the people continues.

The government, Capriles says, is now exploiting Chavez’s death and drawing out the mourning process for as long as possible to generate a huge sympathy vote for Maduro, who lacks Chavez’s charisma. But there’s little Capriles can do. If his campaign goes negative, analysts say, voters may view him as insensitive to the Chavez family tragedy.

“All of this has been coldly calculated,” a frustrated Capriles told a news conference Sunday.

Referring to the role that Maduro, who was then vice president, may have played in obscuring the facts about the true state of Chavez’s health, Capriles said: “Nicolas lied to the county during the past four months …. Nicolas, you toyed with the hopes of millions … And now you are using the body of the president for your political campaign.”

Yet the grief over Chavez’s death seems, for the most part, genuine and profound. Not surprisingly, almost everyone in line is dark-skinned and hails from the poor and working class, the people who benefitted most from the Chavez revolution.

Offering an unsolicited declaration, one man nearly breaks down as he talks about Chavez’s greatness. Another woman compares Chavez to Jesus because “he helped everyone.”

Politics come up. But there’s no discussion of high inflation, the soaring homicide rate, crackdowns on the press or Chavez’s ingenious use of the rules of democracy to consolidate his own power. Instead, these "Chavistas" — as his flock are known — are now pledging their votes for Maduro and claim their mission is to finish the revolution that Chavez started.

Security tightens up as the line reaches Ft. Tiuna, the military base where Chavez lies in state. Soldiers instruct the crowd to take off their hats and to hold their day packs and water bottles in their right hands as the coffin will be on the left.

The crowd that has been chanting revolutionary slogans for the past six hours grows quiet. Each visitor will get just a fleeting glimpse of the coffin.

When the moment finally comes, it’s like visiting a wax museum. Chavez’s face is bloated and his cheeks are streaked with rouge. He wears a green military uniform and a red beret, prompting many to give him a final military salute.

Afterward, tears flow. But others seem to have gained strength from the experience. Among them is Beysi Linares, a beautician. After four attempts, she finally got in to see Chavez. She says it was worth the wait.

Yet even those who dropped out of the line in exhaustion hoped to have many more chances. Like Mao, Lenin and Ho Chi Minh, the body of Chavez was expected to be embalmed and put on permanent display.