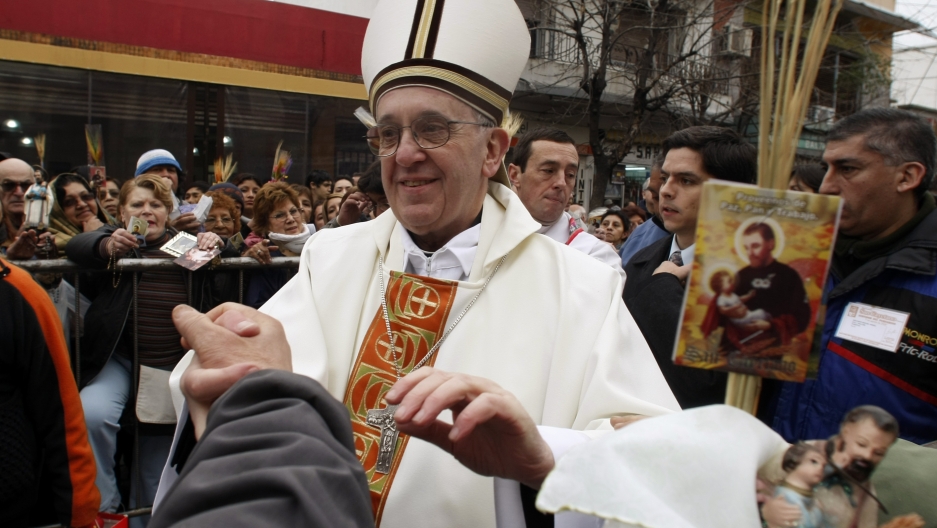 Cardinal Jorge Mario Bergoglio, an Argentinian who was practically forgotten in the discussions leading up to the conclave, elected to take the name Pope Francis. He'll be the first Pope Francis in the history of the papacy. He's also the first pope to come from the western hemisphere.

Bergoglio, a Jesuit priest, is known for eschewing the traditional tapestries of power that go with being an archbishop of one of the Catholic Church's largest dioceses, eschewing a chauffeured limosuine in favor of public transportation. In choosing to go by Francis, in honor of St. Francis of Assisi, it would seem to indicate he will work to reform the church — an important cause of his name-sake.

Thousands of Catholics and eager on-lookers packed into St. Peter's Square, amidst rain, to await the revelation of who would be the new spiritual leader of 1.2 billion Catholics.

In a brief speech to the gathered crowd, Francis asked for the prayers of the people gathered and sent good wishes to Catholics around the world.

He then held a brief moment of silence. Francis is the first Jesuit priest, as well as the first priest from South America.

The papal selection came during the fifth round of balloting since the conclave began on Tuesday afternoon.

Amidst Catholics and Catholic Church watchers, there was an expectation that this may be the first time in centuries that the Catholic Church would be from a non-European country, though Italian Cardinal Angelo Scola was considered a front-runner. Bergoglio is widely believed to have come in second to Joseph Ratzinger nearly 10 years ago, when Ratizinger was chosen to succeed Pope John Paul II.

The selection was announced with white smoke, the traditional Vatican symbol that a new pope had been chosen. Vatican officials went out of their way to make sure they smoke would clearly be white, and not the grayish smoke that was emitted when Pope Benedict XVI was selected.

The new leader will be faced with a difficult task of reforming the Roman Curia, the papal bureaucracy that manages the day-to-day operations of the Vatican City and the church. At the same time, he'll have to unite and re-energizing the world's catholics. The cardinals had to balance those two competiting priorities, a skilled diplomat who can control and unite the Vatican bureaucrats and a vibrant pastor who can energize practicing catholics, in choosing the new leader.

They also had to balance the church's decline in the developed world with its rise in the developing world, particularly in Africa and South America.