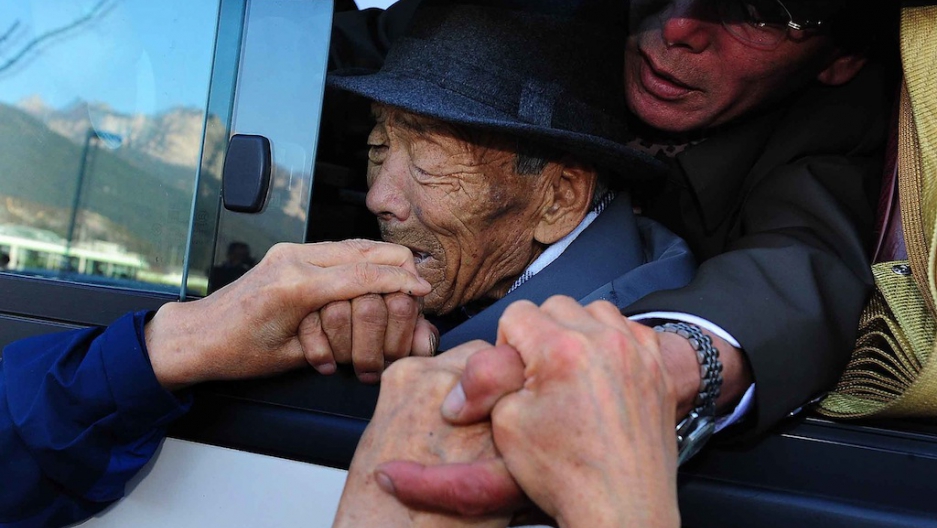 PAJU, South Korea — Lee Eunsook’s artwork glows in the quiet border village of Imjingak as the sun sets over the DMZ, the demilitarized zone separating North and South Korea. A line of neon-threaded pillars in front of the village’s barbed-wire fence, her installation lists the names of a handful of families separated during the Korean War of 1950 to 1953.

As a television crew filmed the opening of her exhibition, Lee called out the names of her own siblings living across the border in the hope the broadcast would somehow reach them.

“Are you there?” she said in tears. “Father is gone, and on behalf of him, I am calling you in North Korea.”

Lee’s brothers and sisters remained in the North after her father fled to South Korea. He died in 2011 without having seen them again. “It was really he who inspired this work, and all the families still divided,” she said in an interview.

The light installation is Lee’s latest work since her success in 2007 with a similar piece on display in front of Berlin’s Brandenburg Gate. The structure commemorated estranged Korean War families by listing 5,000 individuals by name in another country once split by a Cold War boundary.

Lee believes Germany’s reunification offers hope for her country, where a generation of elderly, separated family members is quickly dying off.

The Korean War separated hundreds of thousands of families. More than 75,000 South Koreans and an unknown number of North Koreans still hope to meet their relatives across the border.

But with North Korea raising its war rhetoric to new levels, the odds that they’ll meet again are dwindling.

Pyongyang this week cut off its emergency hotline for the first time since 2008 in response to joint military drills between South Korea and the United States.

The state-run Rodong Sinmun newspaper announced that the government had abrogated the 1953 armistice that halted the Korean War and that the North is ready for war with "surgical nuclear strike mechanisms.”

During the early 1950s, leftists in the South escaped persecution to the North, while Christians and other groups fled communist rule by migrating south. Both nations conscripted young men at gunpoint, adding to the population reshufflings already under way since Japanese domination during World War II.

The Korean civil war ended in 1953 with an armistice rather than a peace treaty, meaning the two sides are still technically at war. Brothers, sisters, cousins, and parents were stranded on one or the other half of the peninsula, above or below the agreed-upon border, known by the popular name as the latitude 38th parallel.

Many weren’t allowed to meet again until the end of the millennium. Inter-Korean relations warmed in the early 2000s, giving the Korean Red Cross a political opening to arrange family reunions at Mt. Kumgang, a zone in eastern North Korea open to tourists. So far, 18,000 lottery-selected participants have met their lost loved ones.

The get-togethers haven’t resumed since the Korean Red Cross held the most recent meeting three years ago partly because of a hardening of north-south relations under former conservative President Lee Myung-bak, whose term ended late last month. Seoul accused the insular state of sinking a naval corvette Cheonan and shelling the South Korean island Yeonpyeong in 2010, which together killed more than 40 South Koreans.

North Korea staged a third nuclear test last month, igniting a standoff with the world and the expansion of United Nations sanctions against the country last week.

More from GlobalPost: For a Korean peace, are sports stars our only hope?

Right-of-center President Park Geun-hye, who took office in February, pledged during her campaign to gradually rebuild ties with the North in the hope of resuming aid and exchanges halted under her predecessor.

But experts disagree about whether she can gain enough political leverage during her five-year term to resume the meetings while responding to North Korean bristling.

“She would be safer to continue Lee’s policies after the Cheonan and Yeonpyeong incidents,” said Leonid Petrov, a North Korea researcher at the Australian National University.

“A resumption of the exchanges wouldn’t be supported by the conservatives in her party,” he added.

With relations worsening almost by the day, the hopes of many divided families will continue to waver.