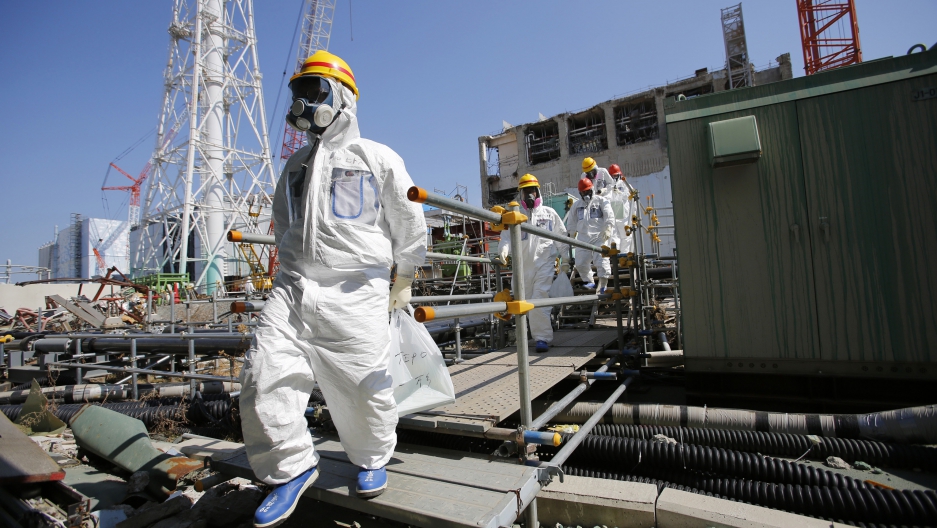 Visitors and workers are required to wear protective suits and masks at Japan's Fukushima nuclear power plant, which was rocked by the March 11, 2011 tsunami and earthquake.
Credit: Issei Kato
Share

FUKUSHIMA, Japan — The journey to Fukushima Daiichi nuclear power plant is littered with reminders of the havoc the triple meltdown has wrought on the lives of tens of thousands of people, now scattered across the prefecture and the rest of the country.

As Tokyo Electric Power (TEPCO) employees take a small caravan of foreign journalists through a checkpoint and deep inside the 12-mile evacuation zone, we see the physical scars inflicted by an invisible, odorless enemy: entire villages lie empty, left as they were when the order to evacuate came through.

There are no signs of human life, apart from passing trucks carrying construction equipment and busloads of workers, wrapped up in blue and white radiation suits and masks.

Two years after the 9.0 earthquake that triggered a devastating tsunami here, homes, gas stations and stores remain vacant. The physical backdrops to normal civic life are in place, practically unscathed by the earthquake. All that's missing are the people.

In other communities near the edge of the 12-mile evacuation zone, a phased partial return to decontaminated homes has begun. But for most of Fukushima’s 160,000 displaced people, there is no end in sight to their post-meltdown limbo.

Even if some neighborhoods are made safe, who, one wonders, would want to live in a town whose economy has been shattered, its paddies and vegetable fields befouled, its heart ripped out by the world’s worst nuclear accident for a quarter of a century?

Inside the heavily guarded gates of Fukushima Daiichi, work is about to begin on a decommissioning operation that could cost at least $100 billion and last 40 years.

The work is on reactor No. 4, where 1,533 fuel assemblies are stored in a pool at the top of the building, leaving them susceptible to seismic shocks and tsunami.

This November, workers will begin removing the fuel rods and placing them in a nearby shared fuel pool housed inside a far more stable building. At the same time, they will replace cooled fuel from the shared pool that’s ready to be placed inside safer dry casks and stored in a newly built facility on higher ground.

Workers will have to extract more than 11,000 new and used fuel assemblies from seven badly damaged storage pools. Work to remove melted fuel from reactors Nos. 1, 2 and 3 won't begin until 2021. Two years after the disaster, officials acknowledge they're not even sure where exactly the melted fuel is located.

The decommissioning will be performed by some of the 3,000 men who work at the plant every day and, according to the World Health Organization (WHO), are at the greatest risk of falling ill as a result of prolonged exposure to radiation.

In a report released shortly before the anniversary, the WHO warned that a third of the plant's workers face an increased risk of developing thyroid cancer, leukemia and all solid cancers during their lifetimes.

Hiroshige Kobayashi, whose company is clearing debris from some of the most dangerous areas of the plant, declined to comment on the WHO report. But he acknowledged that workers face unprecedented danger from persistently high radiation levels in reactors Nos. 1, 2 and 3, which all suffered meltdown and were rocked by hydrogen explosions.

"It's a fact that the levels in reactor No. 3 are very high, so we are trying to deal with that by using remote control technologies and staying as far away from the reactor as possible," Kobayashi said.

The work to secure reactor No. 4 is being led by Jun Hirayama, a site manager at the plant for Hitachi Plant Technologies, a TEPCO subcontractor.

Hirayama, who has been working at the plant since March 16, 2011, conceded he had abnormally high cumulative external radiation exposure, but added that his internal dose was negligible.

“My family were a bit worried when I first came here, but after that I explained the situation to them and then they felt relieved,” he said.

“I chose this job by myself without receiving that much incentive so I don’t have any problems working in this environment,” added Hirayama, whose external radiation exposure is close to the limit of 100 millisieverts. He will leave his post next month, but insisted this was not because of his dose level.

Around the site, there were visible signs of progress since GlobalPost visited Fukushima Daiichi a year ago.

On a hill behind the plant, work is advancing to complete a facility that will remove cesium and dozens of other radioactive nuclides from water being used to cool the three badly damaged reactors. TEPCO is quickly running out of space to store an estimated 230,000 tons of radioactive water accumulating at the site.

With the decommissioning operation expected to take four decades, concern is also mounting that the utility will not have enough people to see the mission through. Already there are reports of TEPCO staff quitting, while thousands of contract workers will, at some point, need to be replaced when they reach their maximum permissible radiation dose.

Takeshi Takahashi, the plant’s manager, apologized for the “inconvenience” the nuclear crisis had posed local residents, and the concern it had caused around the world.

"Even though we are still faced with a difficult task, we'll keep pushing on with the decommissioning process," said Takahashi, who has been managing the plant since December 2011. "It will take a long time to complete our work, especially on the three reactors that suffered meltdown, but we'll do our best to keep them stable.

“It will be a very long time before this plant is a part of history.”

The walls of the plant’s main control room, a radiation-protected oasis of calm where Takahashi and his colleagues constantly monitor screens and discuss the situation with the utility’s headquarters in Tokyo, are covered with messages of support from Japan and around the world, a huge Japanese flag at the center.

In a corridor outside, the irony of a post-disaster message sent by the American Nuclear Society is perhaps not lost on the facility’s occupants: “This is not the end; it’s the beginning of a new nuclear age.”