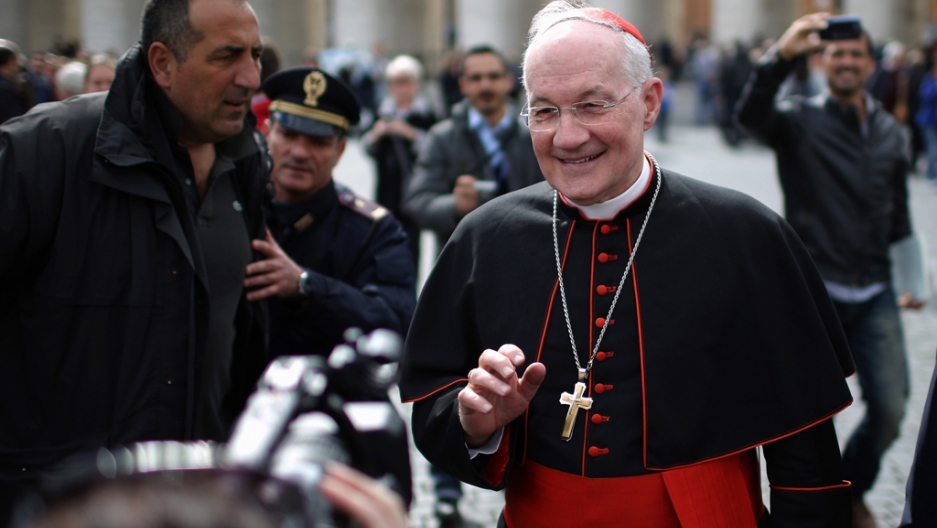 MONTREAL, Quebec — Cardinal Marc Ouellet's rise in the Catholic Church comes with the most Canadian of plot twists: a hockey injury.

Sidelined by a broken leg at age 17, he embarked on a search for deeper meaning and decided on a life in the priesthood.

Now, he's considered a contender to become the next pope.

For the past few weeks, his hometown about 370 miles northwest of Montreal, Quebec, has been thrust into the spotlight, as Ouellet has emerged as a possible successor to Pope Benedict XVI.

“For sure, we’re all very proud,” said Rene Martineau, a farmer who moonlights as the mayor of La Motte, Quebec, said in an interview, adding that all the attention has been overwhelming — and exciting too.

“There’s only one pope in the world, and if he gets there, it would be amazing.”

The possibility of a Ouellet papacy, however, has drawn a more muted response from much of Quebec, where Catholicism has been in steep decline.

His conservative positions on abortion and gay marriage do not sit well in the province.

In the 1960s, the province underwent a period of intense transformation known as the Quiet Revolution, rejecting the church’s dominant role in politics, education and social services.

Some 83 percent of Quebecers identify as Catholic, according to the latest Statistics Canada survey, but a more recent poll suggests only 6 percent regularly attend service.

Robert Di Pede, a professor at Montreal’s McGill University, pointed to the province's "rigorous" brand of theology during the middle of the last century, which focused “too much on sin and on culpability," in explaining the decline of Catholicism.

"There's a whole generation of Quebecers that have, I think, a visceral reaction to the church," said Di Pede, the interim director of the Newman Centre, chaplaincy to the Roman Catholic Students at the school.

"I think that the emphasis now is on a much more hopeful theology — but in the process there were a few casualties."

Ouellet, 68, was away for much of that transformation and has steadfastly held to the tenets of Quebec’s traditional Catholicism.

Quebecers may share his love of hockey, but Ouellet’s conservative values are out of step with modern-day liberal Quebec.

After nearly three decades abroad, including a lengthy stint teaching in South America, Ouellet returned to a very different Quebec as archbishop in 2003. Here he struggled against the new liberal establishment — including many within the church.

He came under heavy criticism for calling abortion a moral crime, even in the case of rape. In Quebec, abortion is legal and public opinion strongly favors a woman’s right to choose.

The Rev. Raymond Gravel, a former Quebec politician who has pushed for reforms within the Catholic Church, is among those who believe Ouellet likely wouldn’t help get Quebecers — or others across the globe that have grown disenchanted with its conservativism — back in the pews.

“It’s clear that people from Quebec will say, 'Wow, it’s fun to have a pope from Quebec,' but after three days what will happen?” he said.

While Ouellet’s views and experience may resonate with the massive Catholic base in Latin America, Gravel believes the church needs a different kind of leader to reconnect in North America and Europe.

The outspoken Gravel says the next pope should be “someone who has worked with people,” rather than an intellectual and scholar.

“It takes a kind of missionary, a man of heart, who doesn’t judge but can bring people together,” Gravel said.

In La Motte, Martineau says the local church where Ouellet first worshipped still plays an important role, though most often it serves as a community center.

“We use it every once in a while for marriage and funerals,” he said.

About 15 to 20 people attend Sunday service, he said, which is alternately held in the village and another nearby.

“It’s like everywhere in Quebec — and maybe elsewhere,” he said.

“It’s so busy now, people don’t feel the need to go. But it doesn’t mean that people who don’t go to church aren’t religious.”