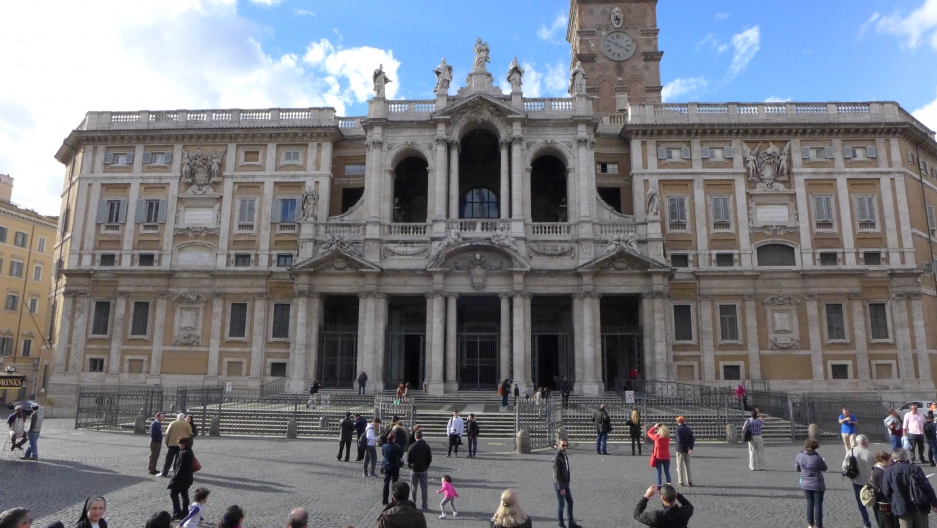 ROME — Over the weekend, as cardinals shunned the press to preserve the secrecy of a conclave two days off, I made pilgrimage to Santa Maria Maggiore, the great church facing a traffic circle on the Esquiline Hill. In a city of monumental churches, this mammoth papal basilica holds within the paradox of beauty and power that colors the oldest church in Christendom.

St. Mary Major is eleven centuries older than St. Peter’s. Pope Liberius, legend has it, selected the site in 352 A.D. after Mary appeared in his dream; when snowfall blanketed Rome in August, he took it as a portent and sketched the lines for building. The original remnants gave way to the design of Pope Sixtus III in 432; he erected a triumphal arch and classical nave. Today the nave mosaics on the life of Mary are high above the pews.

They are one piece of the sheer spread of aesthetics — baroque, rococo, the list goes on — which down the centuries have been melded into the basilica.

The master builder’s impulse that flowed through the veins of many popes lured noble families of Rome to sponsor statuary, gilded ceiling patterns, chapels and ornately decorated interior altars. Bernini, the great architect who designed the colonnade at St. Peter’s Square, is buried not at the basilica where he did his famous work, but at Santa Maria Maggiore.

The Romanesque bell tower was a gift of Pope Gregory XI. A French canonist and theologian of brilliant reputation, he was the unanimous choice of the conclave in 1370. But first he had himself ordained, as was heretofore only a “cardinal deacon” and became a priest in order to then immediately become pope.

He grew comfortable in the affluence of Avignon, and in a dispute with the Florentines, excommunicated everyone in the city-state. The leaders of Florence dispatched a tiny, birdlike diplomat and force of nature in St. Catherine of Siena who parked herself in Avignon for months of meetings with the pope. He blinked. In 1376, over huge objections from the French, who wanted the money to stay in Avignon, not migrate to shabby Rome, Gregory XI left the gilded castle, literally stepping over the prostrate body of his protesting father in the doorway.

Down the decades and centuries, more popes added layers of art and structural design to this enormous wedding cake of sacred space. It takes an afternoon to absorb the beauty of so many centuries and styles.

But you must buy a ticket to the museum in the basement.

Down there is a statue of Pio Nono — Pius IX — the pope who had the bishops and cardinals at Vatican I, in 1870, hold an election-style vote to endow him with infallibility. He kneels in prayer on a pedestal, all white stone, twice the size of a living man. Pio Nono, who began the tradition of using the Peter’s Pence collection to stanch Vatican deficits, quipped, “I may be infallible but I am certainly bankrupt.”

As the path in the basement museum leads past paintings of cardinals and popes, I could not help but think of the basilica’s most famous modern resident. Cardinal Bernard Law resigned as archbishop of Boston in 2002 after the abuse scandal, spent a brief period as if in penance in a Maryland convent, only to find redemption in Rome.

As churches were being shuttered to sell in the ensuing financial disaster, the Curia welcomed Law as pastor of this great basilica at a salary of $10,000 a month. He recently turned 80 and thus cannot vote in the conclave. But for nearly a decade as a consultor to Congregation for Bishops, he helped choose new bishops while living here at Santa Maria Maggiore.

What is this we see in the museum in the lower level of the basilica?

A crucifix of woven bronze and above the figure of Christ, like souls climbing the mountain in Dante’s Purgatorio, sculpted figures of women and men entwined around the upper staff of the cross. A beautiful work of art.

Presented to the Archdiocese of Boston

From friends of His Eminence

I wonder if the loving friends of Medeiros who paid for the sculpture know that it sits in Rome.