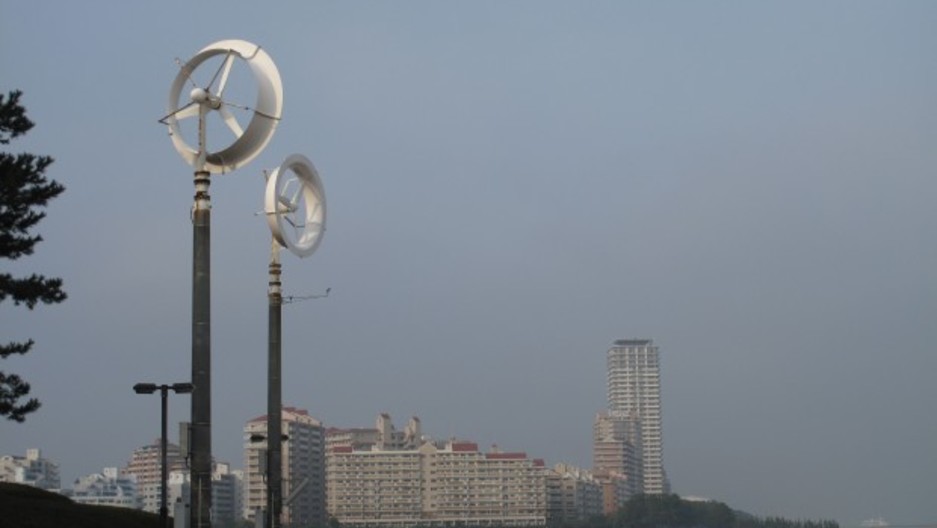 Two experimental "wind lenses" rise over a park in Fukuoka, Japan. They're part of an increased emphasis on clean, renewable energy since the Fukushima nuclear disaster to years ago.

Two years after the Fukushima nuclear disaster, renewable energy is surging in Japan. But economic pressures are also helping revive support for nuclear power, leading to an internal tug-of-war over Japan’s energy future.

In the western Japanese city of Fukuoka, three twenty-five foot towers rise above a small park. They’re an odd sort of windmill, with small blades surrounded by a ring. And their inventor says there’s another big difference.

“It can rotate by itself to face the wind,” says Uji Ohya, a professor at Fukuoka’s Kyushu University.

Ohya’s work is part of a burst of activity in renewable energy since the Fukushima disaster two years ago.

In his lab, he uses a wind tunnel and ultra violet cameras to show how his turbines create micro-low pressure areas to concentrate wind energy.

Ohya’s says what he calls his wind lens is two to three times more efficient than conventional turbines, and friendlier to birds.

But the engineer says he is motivated by more than just a passion for green energy. He wants Japan to avoid nuclear energy, forever.

“As an engineer and a researcher I can say one thing,” Ohya says. “All the technological products fail, unexpectedly.”

And as Fukushima made clear, the consequences of a nuclear failure can be catastrophic.

Polls say upwards of 70% of Japanese share Ohya’s anti-nuclear sentiments. And for a while, at least, so did its government.

Nuclear goes on the shelf, then comes back off

But after Fukushima, the government almost immediately shut down all of its remaining reactors for a thorough safety review, and it soon announced that it would phase out nuclear power altogether by the 2030s.

Instead, the country would invest heavily in renewables, financed largely by a new European-inspired law called a feed-in tariff, which set a fixed price for green power and required utilities to buy it.

But then a strange thing happened.

Analysts say economic troubles played a big role in the outcome, troubles brought on in part by the high cost of replacing all that lost nuclear power.

Whatever the causes, Japan is now facing a schizophrenic political situation, with a population that‘s at once pro and anti-nuclear.

Harmed by Fukushima, but resigned to nuclear

That contradiction was on display recently in a meeting hall about fifty miles from the ruined Fukushima plant, where local business people set up tables to draw attention to their post-meltdown struggles.

One of them was Toshiyuku Azaki, a farmer who grows peaches and apples. He was only serving up samples of peach juice, though.

Azaki told me his peaches are tested regularly by the government and are fine now, but that his apples are still too radioactive to sell.

For Azaki, the dangers of nuclear power couldn’t be more real. He has lost much of his livelihood, and thousands of his neighbors who live closer to the plant have lost everything.

But despite his deep concerns, he told me that he believes nuclear power is simply necessary for the Japanese economy.

“It would be good to not rely on nuclear energy,” Azaki said through a translator. “However the reality is that it may be quite difficult to shut down all power plants across Japan.”

The hall where I met Azaki was playing host to a big nuclear safety conference. It was full of tough talk about the need to improve standards and change the entrenched culture of complacency that everyone agrees played a big part in the Fukushima disaster.

But there was also a lot of talk about a future here that includes nuclear power.

For their part, opponents say Japan’s nuclear ambivalence is about more than just economic need. Many say the country’s political and economic establishments are still under the sway of a powerful nuclear lobby—what activists often call Japan’s “nuclear mafia.”

And the contempt seems mutual.

Hasegawa says his organization is all for the development of better renewable power. But he says the new law supporting renewables through guaranteed revenue is inconsistent with capitalism.

“It’s a strong intervention into the market,” Hasegawa says. “It’s a communist policy,” because it fixes the price of energy.

So far Japan’s new Prime Minister Shinzo Abe has made no move to roll back the country’s post-Fukushima renewable energy goals. But he has reversed the government’s course on nuclear, promising to reopen closed plants and maybe even build new ones.

The shift back toward nuclear could take some of the momentum out of the renewables juggernaut. But there’s a question as to whether it will really happen. That’s because Japan’s new nuclear regulatory agency has proposed new safety standards, and they’re so strict that it could take years for the country’s nuclear plants to be upgraded to meet them.

So nearly two years after Fukushima, Japan’s national tug of war between nuclear and renewables is still very much unresolved.

Getting the energy conversation started

At least some backers of green power here are confident about the future, though.

Yamashita Noriaka, of the Institute for Sustainable Energy Policy (ISEP), a green energy think tank in Tokyo, says an energy “miracle” does not happen abruptly, and that the debate has really just begun.

“We just start the energy discussion after Fukushima,” Noriaka says. “So we need to be patient. We can change in Japan in the long future.”